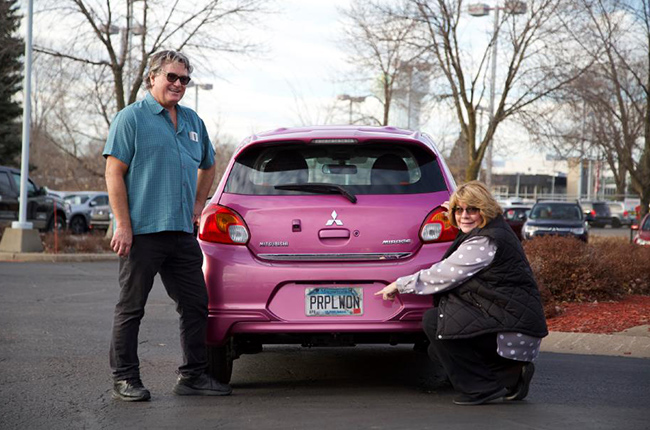 The Mitsubishi Mirage has been a crowd favorite given its compact size, superb fuel efficiency, and affordable pricing. Notably, this small wonder is also being sold in North America, in fact, there’s even a 2014 Mitsubishi Mirage that has been driven 414,000 miles, in kilometers, it’s 666,268. The hatch has gone through six grueling winters in rural Minnesota. Perhaps, the only thing that stopped them from going further is an offer from a local dealer, wherein trading their 2014 unit shall then reward them with a brand new 2020 Mitsubishi Mirage.

Related: Mitsubishi to launch a new line of vehicles The car was dubbed by the Huots as the ‘Purple Won’, it was even personalized with a special vanity plate. Worth noting though is that their 2014 unit was bought from the White Bear Mitsubishi dealer which is also the one who offered them the trade-in deal. So their ‘Purple Won’ was utilized as a delivery vehicle. It was able to haul several materials such as rocks and mulch for a landscaping project. Janice actually owned two Mitsubishis in the past, specifically, an Outlander Sport and Montero Sport. Given her good experience on both models, this has then led her to get another Mitsubishi, perhaps something that has better fuel economy than her other vehicle. Gladly, during their ownership phase, the Mirage did go through regular maintenance.

The Huots did build great memories with the car. Janice even recalled some instances at gas stations and grocery stores wherein the car was filled with lovely comments, some kids would even stop and point at the car.

The Mitsubishi Mirage is undoubtedly one of the most fuel-efficient gasoline-powered vehicles today. Notably, both the Mirage and Mirage G4 is set to undergo an extensive redesign for the 2021 model year. It is said that sales of the refreshed Mirage are scheduled to start in the first quarter.