Making a big reveal at the 2017 North American International Auto Show (NAIAS) is the Audi Q8 hybrid concept, the German marque’s future flagship for the full-size SUV segment, set to launch in 2018.

At first glance, the Q8 hybrid concept is undeniably different from the current SUV lineup of the German marque.

It sports a redesigned octagonal grille, veering away from the current hexagonal shape of Audi's cars. This is then complemented by honeycomb inserts on the front bumper. Completing its agressive fascia is a pair of flat wedge-shaped open headlights, with glass-covered individual lighting. 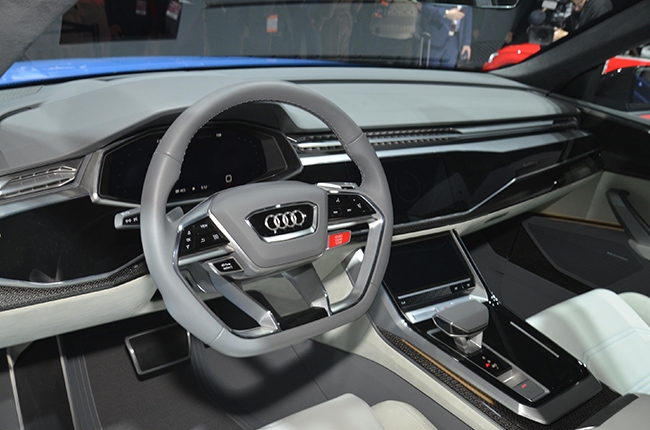 In addition, the frameless door windows accentuate its flat roofline. Fenders, doors, and side panels are also restyled to achieve its athletic curve, emphasizing the flow of lines on the vehicle’s sides. Moreover, it features a long roof edge that provides shade on the flat window of its coupe-trim rear end.

Size-wise, the Q8 hybrid concept is said to fuse the spacious cabin of an SUV and the sleek, distinct trims of a coupe, without sacrificing the ample headroom in the rear seats. With its 3000 mm wheelbase, the vehicle will have bigger legroom for its passengers, as well as luggage area. With a length of 5,029 mm, the Q8 concept is longer than the locally available full-size SUVs such as the 4,990 mm long Toyota Land Cruiser and the all-new 4,940 mm Honda Pilot.

Inside the cabin, the shift-by-wire console with which the driver controls the transmission is made floating above the center tunnel. It also features an instrument panel that extends inward the dashboard in steps. Furthermore, the central console and display surfaces are integrated into a aluminum-framed glossy black strip on the dash called the “black panel.” For the occupants’ comfort, the seats are covered in a combination of fine Nappa leather and Nubuck leather in pastel silver. In addition, structured textile of a similar color of the leather elements covers the head restraints. All these are integrated into an 8-speed tiptronic with a decoupler. However, the Q8 concept won’t have the the NVIDIA Drive PX, unlike the Q7 showcased at the 2017 Consumer Electronics Show.