Back in 2019, Toyota and Subaru confirmed that they would both work on the next-generation version of the Toyota 86, and the Subaru BR-Z. Further reinforcing this, the two automotive companies also agreed on a new business and capital alliance. The result of this renewed partnership was to see both companies pooling their resources to work on new vehicles together.

While speculations about the all-new vehicle have been going around the internet with its powertrain being heavily discussed, it is only now that photos of the next-generation sportscar popped up.  until now. With that said, spy photos of what could be the all-new 86/BR-Z. These photos come from the Instagram user Kystify who initially sent his video of the vehicle to Youtuber Matt Maran Motoring. The prototype vehicle was said to have been spotted in the US around the Ann Arbor Michigan area. A fitting area since this is where Toyota’s  North American Research and Development is located. 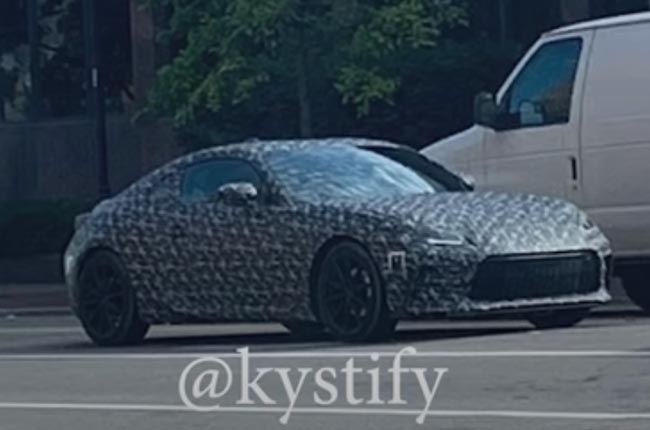 With the vehicle being spotted in the area, it could mean that it was truly a test car for the next generation chassis with a temporary body on it, or it could be its final form. As standard with all test vehicles, this one comes with camouflage. The details of the vehicle are hidden, but the all-new model is still expected to come with a compact coupe design.

At least for the spy photos, the front-end of the vehicle now comes with a larger air intake, along with a new set of longer-looking headlights with matching daytime running lights. Moving on to the side, it appears to carry over the same shape as before. The rear fenders of the vehicle, on the other hand, appear to come with a more prominent form than before. The rear itself seems like it has taken a page out of the Toyota Supra’s design book and applied it to the next generation Toyota 86. This can be seen by its distinct trunk shape which appears to have a small integrated lip to it and its new sharper taillights.

The big question still remains, what sort of engine and power output will it have? Reports have suggested that it could come with a 2.4-liter flat-four engine however, these haven’t been confirmed. The engine is said to make around 216 to about 226hp along with 240 Nm of torque. This makes the vehicle slightly more powerful than its predecessor with a good serving of torque, however, even with the slight bump in power, it should still retain the same balanced characteristics.

That said, only time will tell when the next-generation Toyota 86 will be launched. Not much else is known about the vehicle and no official specs have been leaked or released. Given how well the Toyota 86 and the Subaru BRZ were received in the Philippines there is a high chance that the second generation will go on sale locally.