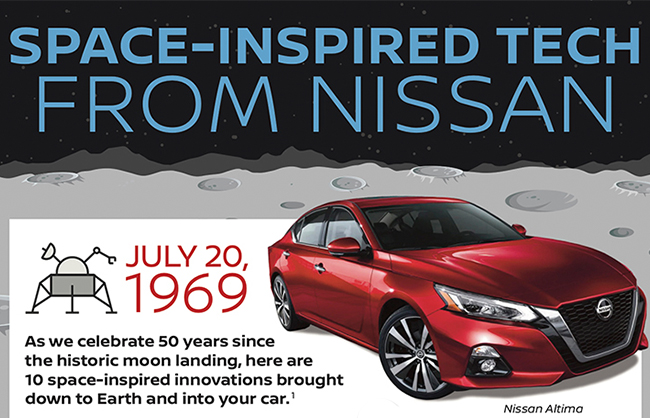 Nissan celebrates the 50th anniversary of the Moon landing with a list of 10 technologies used in the momentous event that was brought back to Earth and are used in cars today.

First on the list is radar and camera-based ProPILOT Assist driver-assistance technology. This can be seen in modern cars as lane keep assist and radar-guided cruise control, as well as autonomous driving.

Second is LED lighting which has revolutionized the way we see the road. This previously rare feature has now become standard on cars across the world. This lets the driver see further and better compared to its older halogen counterpart. Examples of these can be found on the Nissan GTR R35 in the form of daytime running lights. Third is Zero Gravity seats with Temper Foam. This has seen use in newer cars, giving the driver and occupants better comfort over uneven roads, which can be found in the Nissan X-Trail. Fourth is GPS-based navigation. Gone are the days where paper maps or having to memorize directions is needed. GPS-based navigation and similar apps have now made traveling to unknown locations much easier with the added bonus of keeping track of traffic, as well as estimations of travel time. These can be seen in the Navara and Terra.

Fifth is computer software. This can be seen in cars with the advent of the Engine Control Unit (ECU) that replaced mechanical fuel injection. With a computer as the brain of the car, many more improvements can be done to make cars more efficient and to perform better. Sixth on Nissan’s list is lithium-ion batteries. Modern-day vehicular applications for these aren't just limited to Hybrid or electric vehicles, but these can also be found in the keys that are used to start modern-day vehicles.

Eight is studless winter tires. These tires offer more flexibility on the road without the need for metal studs that help these tires retain flexibility and maintain traction. These were used in the Moon Landings due to the coldness of space the need to be able to adapt to the Moon’s surface.

Last but definitely not least is satellite radio. This feature from the Moon Landing helped NASA track the spacecraft as it journeyed from the Moon and back. For the modern-day, however, it is used as a way to broadcast ad-free via the XM and Sirius companies. Like the Spotify the modern equivalent this service had a monthly or annual fee.