Peugeot Philippines is looking to make its premium 5008 midsize crossover more enticing to all by making it more affordable. A small-scale launch was held in order to celebrate the brand new variant, the 1.6L THP Allure AT. Priced at only P2,190,000, the value proposition becomes a high point for the Peugeot because of the fit and finish of its interior and high-brow styling of the exterior. Respectable performance can also be had from the 1.6L turbocharged gasoline motor that pushes out 165 hp and 240 Nm of torque mated to a 6-speed automatic. The new variant keeps the top tier features from the top-spec trim while keeping the price attainable. The crossover features a pseudo-MacPherson front axle, while the rear features a twist-beam axle with hydraulic and pressurized shock absorbers. The exterior looks of the 5008 Allure is, for lack of a better term, alluring. The big cat motif that the Peugeot logo is evidently shown on the front fascia since the lights give off a menacing glare. The rear features the three LED bars that are also a feature on the smaller relative of the 5008, the 3008 compact crossover. The angular and square elements are broken up by some of the cuts and edges that give it a burlesque feline-like appearance. 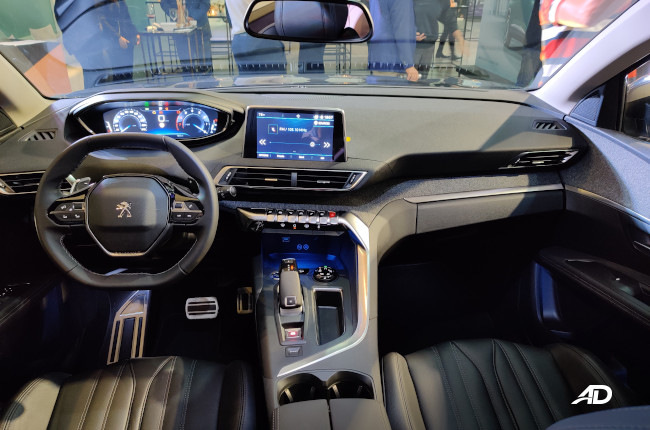 The interior is as futuristic as it gets for consumer vehicles. Three spokes are too mainstream, so to stand out from the rest, Peugeot has opted for a two-spoke design which is complemented by a fully-digital gauge cluster and shifter. Because this is the GT Line, it has a bevy of amenities and trimmings that elevate the look and feel of this 7-seater. Peugeot also touts its 3 + 2-year extended warranty that goes for all units purchased through an official dealership. This is coupled with a 24/7 service center that is ready to accommodate clients at any time of the day enhances the ownership experience and longevity of the car.