While everyone was looking at the normal Picanto, Kia also launched a supplemental model alongside the small hatchback that is essentially a raised version of the popular city car from the South Korean manufacturer.

With added ground clearance and some additional body cladding, the X-Line is essentially an offshoot of the brand’s GT-line, a name that indicates the top of the line specification and features. The X-Line is different. Instead of sporting regular add-ons, this version adopts a more rugged appearance and offers more ground clearance for a more commanding view of the road, and added – albeit still limited – capabilities over uneven road surfaces. The exterior, at least in the press photos, features bright colors on both the interior and exterior of the automobile. There are also additional body panels and black plastic that outline the wheel wells, and a few faux skid plates that can be found in the front and rear bumpers, giving this city slicker a more rugged appearance. 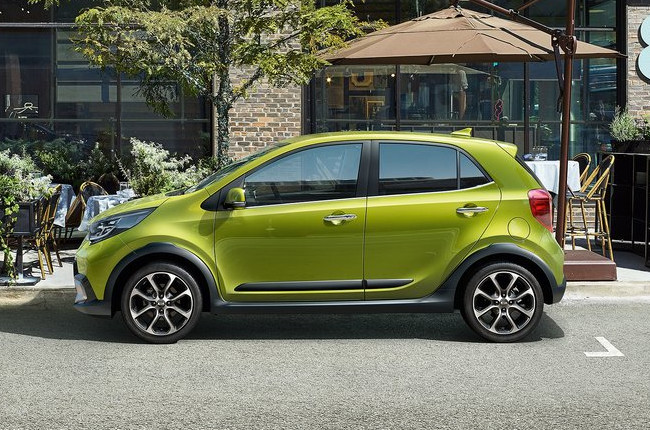 The small hatchback – turned small crossover – features a 1.0-liter engine, similar to what we currently have with the LX Variants of the Picanto in the Philippines, but there is no 1.2-liter option. Instead, Kia has opted to take its 3-cylinder motor and turbocharge it adding to its performance. With about 99 hp added to the mix, a contrast to the 75 hp the 1.0-liter achieves without boost, we can expect spritely performance from the X-Line. So over the base variants of the Picanto, it will also have added ground clearance. With the modification that Kia has done to it, we can expect over 150 mm of ground clearance from the small crossover. The engine will come paired with Kia’s automated manual transmission (AMT) which combines the convenience of an automatic gearbox, but with the properties of a manual transmission. We also see those vibrant colors in the interior. Bright-colored accents are present all throughout the cabin, and accent stitching can also be found in what we assume to be the best package that Kia can give its X-Line. Leather also adorns the steering wheel and the other key touchpoints of the interior like the door cards which feature a combination of colored panels and leather.

It is still unclear whether Kia Philippines will be bringing in this variation of the Picanto. Considering that it already has a contender in the small hatchback category, it might be something to consider for the future. Perhaps the Picanto X-Line could be another foray into a segment that has yet to reach its peak, seeing as the segment is relatively young in the Philippines for the time being. There is no word yet on the Picanto X-line, but we could see a similarly-equipped model like the current-generation Kia Picanto which is better-equipped considering its segment, we’re hoping for an X-line, and we’re hoping it’s just as featured as its normal counterpart.