Vehicle customization is indeed becoming a trend today mainly for those craving for certain enhancements, it is perhaps the art of most car enthusiasts. A way of showcasing their creativity through personalizing their own ride. With that in mind, Wald International pumps up the all-new Suzuki Jimny with its own version of the mini off-roader: the Black Bison Edition.

Cute yet capable and compact, words which are well associated with the Suzuki Jimny. For years the Jimny has captured many hearts, with its distinctive cute, three-door boxy shape design, raised ground clearance and a stash of off-road capability. Now on its current generation, Jimny stays true to its DNA for being that mini off-roader, but with further enhancements done by Wald, it has been given much of an emphasis to the vehicle’s strong core values plus more. The Jimny Black Bison edition supports a more aggressive stance (a very macho stance, even), starting with its newly installed bumper accentuated with a well-arranged four-piece LED lamps. It also has a well sculpted front grille highlighted with a pair of headlight covers for that added stash of an old-school feel to it.

Other macho touches include the add-on type Aero Bonnet and a roof-mounted LED strip found at the front and rear wing of the vehicle, perfect for off-roading escapades. Lastly, the Jimny Black Bison Edition comes with a new set of wheels finished off with red accents for that sinister appeal. The following aggressive highlights contrast the matte-gray paint tastefully.

Well for some, it may be too much of a modification, but for us, Wald just served the right amount of flavoring for the Suzuki Jimny. Bringing more spice and attitude which truly strengthens the true DNA of the vehicle, mainly for being a capable and compact mini off-roader.

So, has this been a yay or nay for you? 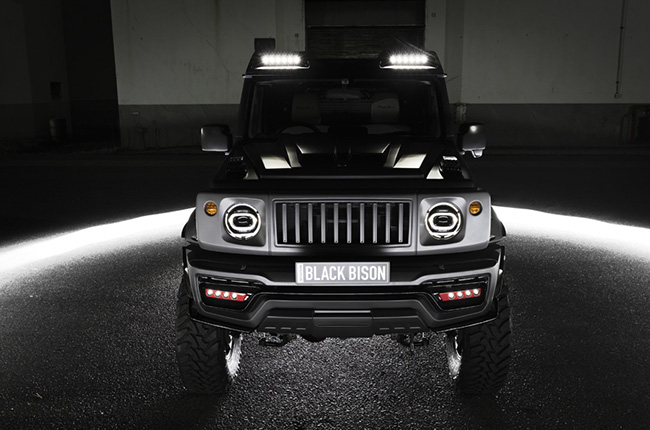