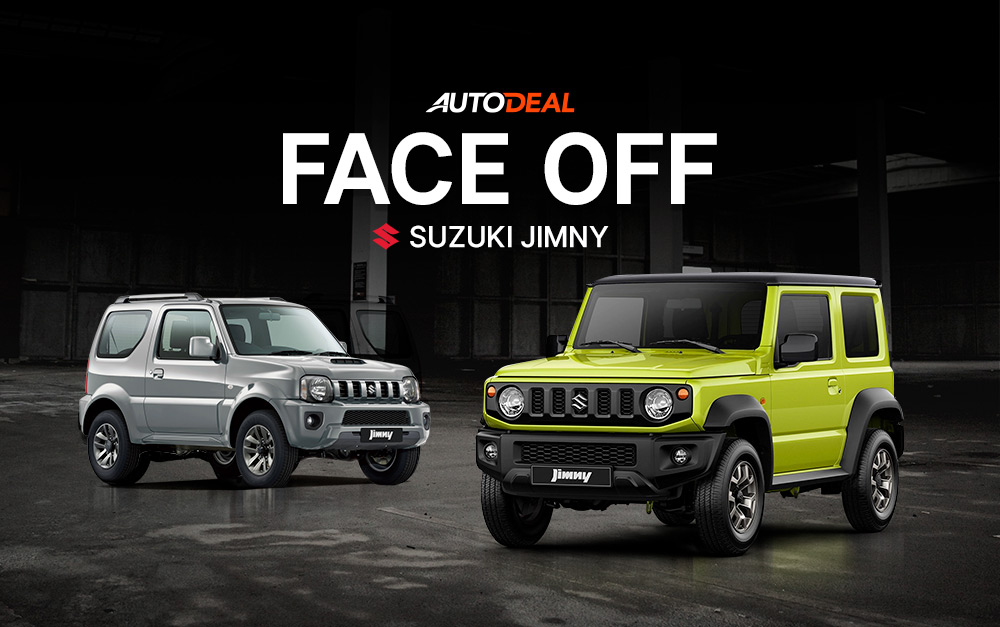 If there’s a list of the most talked-about new vehicles in the local market for the past months, the Jimny would have to be one of them. Actually, the tiny 4x4 SUV would be at the top of that list. Now, the talk is over because, ladies and gentlemen, it has arrived – all thanks to Suzuki Philippines. The all-new 2019 Suzuki Jimny is already available in the Philippines but we hate to break it to you; the first batch is already gone.

As you all know by now, we have this habit of comparing models of old to their facelifts or all-new variants. If there’s a new model in town, there needs to be what we call a ‘face-off.’ Nothing’s better than comparing them straight up, head-to-head because we all know you just love seeing how things evolve. So, without further ado, here’s what has changed in the mini 4x4 SUV from Suzuki. 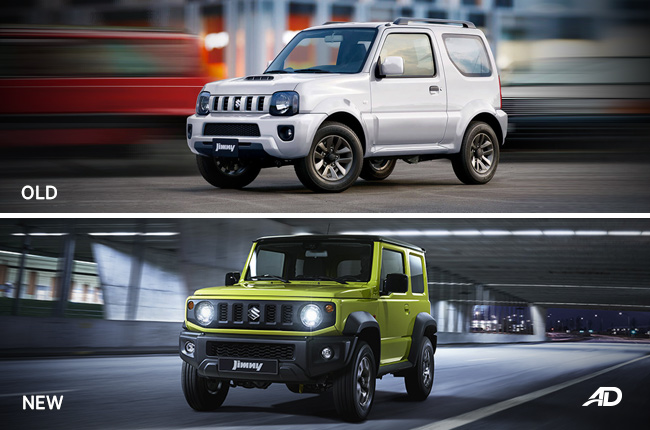 The updates on the 2019 Jimny’s exterior is perhaps one of the most celebrated traits to the success of this nameplate. Obviously, the new generation’s overall exterior design consists of pointy corners, which is a contrast to the curvy appeal of the previous-generation model. The front is decorated with a thick slab of a black grille that houses the round headlights and turn-indicator lamps. It still has the vertical slats as air intakes, while below is a black front bumper that copies the shape of the grille. 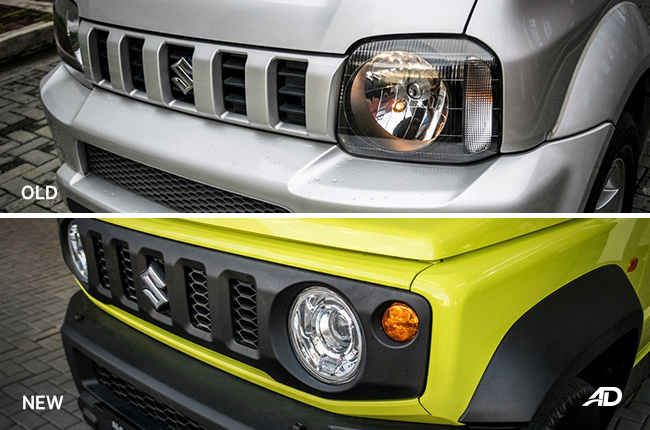 A side profile will give you the impression of a more upscale SUV, the Mercedes G-Class to be specific – only it’s way smaller and compact. There are black wheel fenders that are the unique characteristics of the Sierra trim, adding more width to the mini 4x4 SUV. The normal monotone paint finish is available for all variants of the 2019 Jimny, while the two-tone (black roof) option is exclusive for the GLX. Now, is the word ‘exciting’ even enough to describe the all-new Jimny? Your answer is as good as ours. 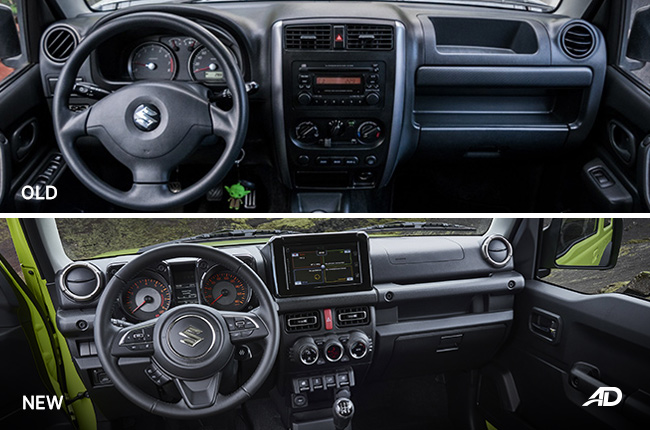 At first glance, the new look of the interior of the 2019 Jimny is a hundredfold better than the outdated cabin design of the third-generation model. The all-new model boasts a new dashboard layout that’s more appropriate for an off-road machine. However, one of the highlights of the changes is a 9-inch capacitive touchscreen – a huge update from the radio head unit of the old model. The new center console unit comes with large icons and soft buttons for convenient controls, as well as an off-line GPS navigation system and off-road audio guide.

The instrument cluster on the all-new model is more modern in appearance, complete with orange-lit meters, compared to the old-school looks of the previous iteration. Given the changes, you may also find some elements remain untouched. Along the dashboard, you’ll observe that the Jimny still has round air condition vents. The seats are also still wrapped with fabric, which is just how they should be. 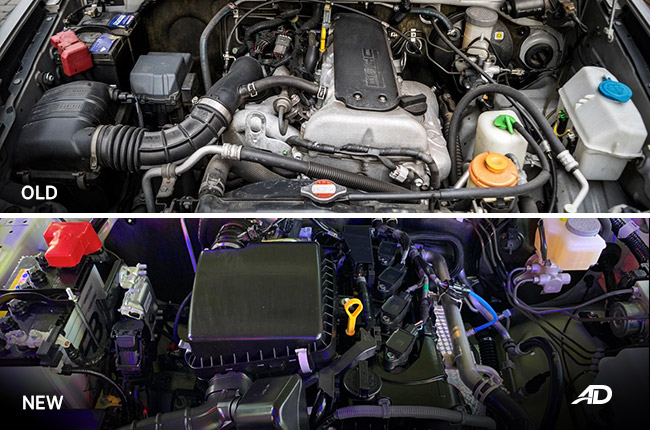 If you’re an avid fan of the Suzuki Jimny, you know the engine has gotten bigger, more powerful, and definitely more capable of off-roading. The 1.3-liter with 81 hp and 110 Nm of torque was swapped for a 1.5-liter 4-cylinder K15B engine, which permits the car to have 101 hp and 130 Nm of torque. The new engine features the brand’s specially designed flywheel that improves engine flexibility, as well as reduce noise, vibration, harshness (NVH). There are also new intake system and long nozzle injector that maximizes the new engine’s fuel economy.

As for its drivetrain, the 2019 Jimny is equipped with Suzuki’s All Grip Pro four-wheel-drive system (4WD). This is a part-time 4x4 system with low range transfer gear that enables the car to switch between 4WD and 2WD for optimal efficiency without sacrificing off-roading prowess. Even better, the 4L 4WD mode adds more torque for better performance on rough terrains. 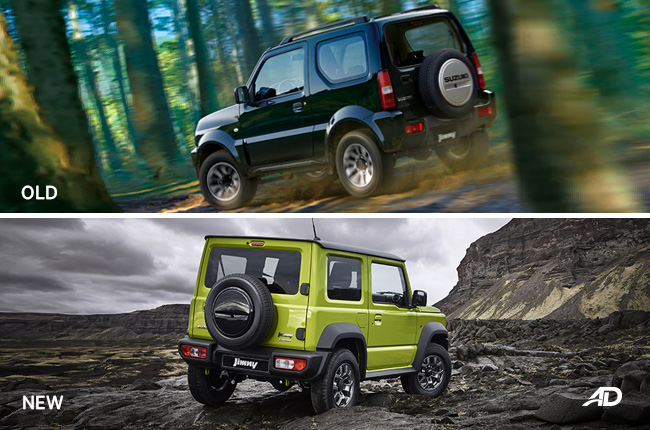 No matter how big the changes are both in looks and performance, Suzuki still found no reason to pull the 2019 Jimny away from the same ladder frame. Ladder frames are known for their resistance to torsion, better than a monocoque body, which makes the choice for off-road nameplates.

Apart from its structural frame, the 2019 Jimny has been blessed with improved approach, ramp breakover, and departure angles. The approach angle is an impressive 37 degrees, the ramp breakover angle is 28 degrees, while the departure angle is a whopping 49 degrees. The result is enhanced maneuverability over ridges and verticals – you know, the typical stuff you can stumble upon if you’re an off-road driver.

To know more about the 2019 Suzuki Jimny’s variant range, specifications, and prices, you may visit the AutoDeal Car Guide section. You may also want to secure yourself a reservation because this thing is selling like pancakes.