This year’s Tokyo Auto Salon brings a lot to the table as it is the perfect opportunity for Japanese automakers to showcase the latest and greatest products that they missed out on in 2021. In Toyota’s case, it had on display two Toyota GR Yaris models. There is more than meets the eye though as these are fully-fledged Toyota GRMN Yaris units in their respective track and dirt packages. The GRMN Yaris came about from the company’s desire to “deliver cars to customers that evolve quickly and can be tailored to individuals like in the field of motorsports.’ Compared to the regular Toyota GR Yaris, these GRMN models come with better performance. These vehicles are now 20kg lighter as the rear seats have been removed. The hood, roof, and spoiler now consist of carbon-reinforced plastic to further reduce weight from the hatchback. The stance of the GR Yaris has been widened by 10mm and it also now sits 10mm lower to further improve its center of gravity. 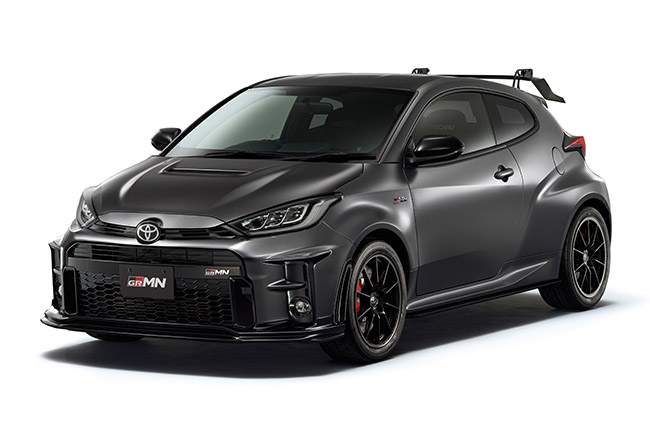 These aren’t the only changes as the suspension has also been upgraded. Toyota Gazoo Racing has given the GR Yaris a mechanical LSD for the front and rear, a stronger close-ration gearbox, and a lower final drive to help with acceleration. The chassis has also been reinforced and stiffened with more spot welds to help with body rigidity. The seats of the hatchback have also been replaced with lightweight Recaro bucket seats. Under the hood, the GRMN Yaris still packs the 1.6-liter turbocharged 3-cylinder that still packs 268 hp but produces more torque as it now pushes out 390 Nm.

The GRMN Yaris is also made available in two packages, the first is the Circuit package and the second is the Rally Package. The circuit pack gives the hatchback bigger BBS 18-inch wheels, 18-inch brakes, Bilstein shock absorbers, side skirts, and a front lip. The Rally pack, on the other hand, gives the vehicle GR shock absorbers, an under guard set, and a roll bar.

While the upgrades are all great news for the GR Yaris, sadly these GRMN models are limited with only 500 units available. These models will also be only exclusive to the Japanese market and will not be sold on a first-come-first-serve basis as well. Interested buyers will need to sign up for a web-based lottery to have a chance at buying these units.