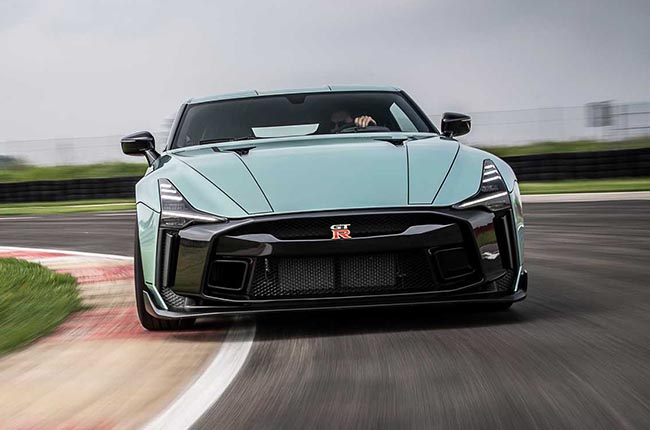 The Nissan GT-R R35 has been on the market for about 10 years now. The Japanese brand has given the sports coupe several updates throughout its model life cycle with the most recent and most striking one being a 50 unit limited run of the GT-R 50. A redesigned Nissan GT-R R35 done by Italdesign. While the vehicle itself is just another special edition it builds upon what the R35 has started and adds more power and better handling into the mix.

Staying true to its R35 DNA and building upon it, the GT-R 50 comes with even more power than its Nismo equivalent. The Italdesign version of the sports coupe comes powered by the VR38DETT, a twin-turbo 3.8-liter gasoline V6 motor. For the Italdesign vehicle, Nismo was able to squeeze out an additional 110hp from the engine giving it a total of 710hp. To go along with the increase in power, the vehicle’s torque figures have also been increased. The engine now pushes out 780 Nm of torque, which is 128 Nm more than what the standard Nismo tuned VR38 can produce.

In order to handle the extra power that the sports coupe now makes, Nissan has reinforced the 6-speed sequential dual-clutch transmission in the vehicle. In order to maintain the vehicle’s stellar handling characteristics, bigger Brembo brakes were also added along with a reworked suspension by Bilstein for continuously adjustable damping. The redesigned vehicle also gets a custom set of 21-inch staggered alloy wheels. The GT-R 50 gets 255/35/R21 size tires at the front and 285/30 R21s at the back. Giving the vehicle its grip on the road is a set of Michelin Pilot Super Sport tires.

While the GT-R 50 is limited to just 50 units it's still nice to see that even with a redesign and bump in power and new suspension tuning the vehicle still stays true to its AWD R35 DNA.