The minivan marketplace isn’t as big as it once was in the early 90s. Now, there are only a few options available for those who want a big family and cargo carrier. You have the likes of the Toyota Alphard, the Toyota Hiace Super Grandia, the Kia Carnival, and the Peugeot Traveller Premium 8-Seater. While the rest of its competitors are a bit more established, the Traveller brings something special to the table thanks to its versatile seating, frugal engine, and great feature set.

This now begs the question, what sets the Peugeot Traveller apart from the rest of its competitors? With that in mind, we will try to answer that and much more with our in-depth and honest review of the minivan.

Performance
Engine Output (HP), Acceleration, Transmission, Handling 4.5/5
Design
Exterior & Interior Design, Quality, Fit and Finish, Ergonomics 4.0/5
Ride Comfort
Cabin Comfort, Suspension, NVH Insulation 4.5/5
Safety and Technology
Convenience Technologies, Active and Passive Safety Features 4.0/5
Value for Money
Amount of the vehicle you get for the price, Fuel Efficiency 4.0/5
What You Will Like
What You Won't Like
How We Do Our Reviews 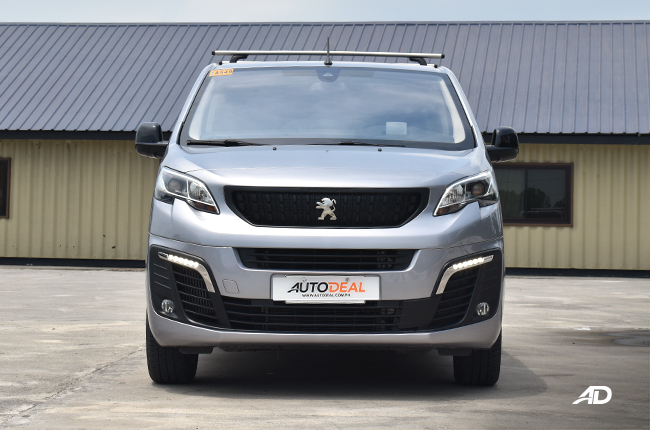 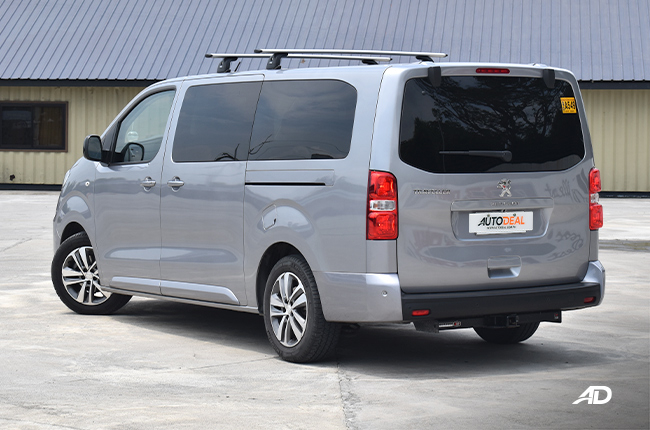 When it comes to minivans it's hard to redefine the rectangular shape that works very well in maximizing interior space. The Peugeot Traveller Premium does come with a boxy design but with a curved front end to give you a more aerodynamic shape. While the cat-like design cues aren’t as strong as compared to its crossover siblings the 2008, 3008, and even the 5008, a few hints are still here and there, especially with the headlights.

At the front, you get a large grille that is just for design as there are no actual vents that lead anywhere. If you are curious, the Peugeot Traveller actually “breathes” through the bottom air ducts that supply a great amount of cooling and airflow into the engine bay of the minivan. You do get Xenon headlights with LED daytime running lights at the front with a clear and crisp cut-off as well as a great throw. These are things that will help you greatly especially when traveling at night.

On to the sides, and there isn’t much to talk about aside from its massive power sliding doors and large windows. Aside from this, it's clean lines all around and not much to complain about. At the back, it's another round of flat surfaces with a nice accent on the massive tailgate which is unfortunately not powered. The rear glass does open to give you access to the cargo space at the back and there is a tonneau cover provided but this is only good for lighter items. One thing we do have to commend is the space at the back which can fit a set of 15-inch tires and more if you need it. The cabin of the Peugeot Traveller Premium is specious, while there is no center console, it does give a lot of room for maneuverability. This allows the passengers to easily get to the front passenger seat without having too much trouble. It's also great if you have to quickly get to the driver’s seat if you are sitting in the second row of the vehicle.

Speaking of the driver’s seat, once you get on it which is a bit of a climb for shorter people, you are greeted by a heads-up display and analog gauges with a digital trip computer. The instruments are crisp and clear and it's easy to quickly get acquainted with the new controls.

One thing we noticed with the Peugeot Philippines lineup of cars is there is a bit of a learning curve to get used to, but once you get used to it it's all good from there. In the case of the Traveller, this learning curve was less steep and we quickly learned the ins and outs of the minivan. Moving onto the back of the car you have greeted two rows of three seats that can move independently of one another which is great. The leather material is sturdy and supportive and won’t stress you out on long trips. One thing we did notice is that it's a bit difficult to fold and move the outermost passenger seat in the second row. This makes ingress and egress for the vehicle a bit difficult to do especially as the controls take some time to get used to.

Since space in the second row is quite good and the seats can be moved forward and backward a fair bit, there is a lot of legroom to spare even for taller passengers. The same can also be said for the third row as it too can be moved backward and forwards as well. One thing to note is that the second row also gets access to tray tables which are found behind the driver and front passenger seats. This is great as the second row doesn’t come with direct access to cupholders.

Storage space is also great with the Peugeot as it comes with small cubby holes on the doors and in the dashboard where you can store items. The boot space is also excellent as it comes with 1,060 liters worth of space. To put that into context, you can store a set of four 15-inch wheels with tires on at the back without them impeding on space for the third row. We actually even tested it and we could put a folding table with folding chairs on top of the tires as well. Riding inside the Peugeot Traveller is quite a pleasant experience as the bumps are kept at bay by the suspension. In the driver’s seat, you get a van-like experience as you are seated in a more upright position compared to that of a car or crossover. You do get to see more of the road and the fact that the Peugeot comes with a massager function for the front seats also helps elevate the levels of comfort. The massager function does focus more on your lower back which is great, especially on longer trips.

At the back and in the second and third rows there isn’t anything to complain about if you are an average-sized Filipino. The space is decent and the seats are supportive enough to get you through long-haul trips. For taller passengers, however, it can be a bit of a tight fit if you are in the third row. In terms of technology, the Peugeot Traveller has a decent amount. It may not be as high tech as its other competitors, but it's all useable tech. It has a 7-inch capacitive touchscreen, a 3.5-inch instrument panel, and a head-up display for the speedometer. It also comes with massage seats and automatic sliding doors. You also do get a decent amount of charging options with the 220V socket found behind the front passenger seat along with 12V sockets found on the dashboard and in the third row. While you may have to buy an adaptor for the socket as it comes in the European style, it's still very much useful and can charge multiple handheld devices and even a laptop. While these are the industry standard for the segment, we do wish that Peugeot adds a bit of tech such as adaptive cruise control and a 360-degree camera for the Traveller to really put it a cut above the rest in terms of its safety features. 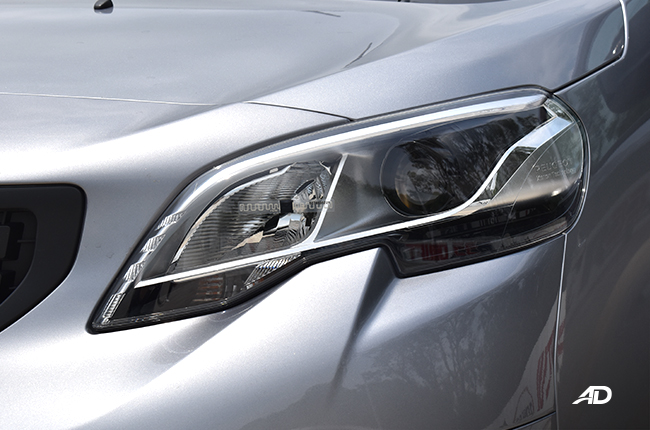 The Peugeot Traveller is not a race car but it does give you good handling as a front-wheel-drive minivan. The suspension is soft for comfort but gives you a decent amount of grip when cornering. You do feel the heft and size of the van when driving it but it's very manageable. The engine is nice and quiet, however, NVH can get a bit low past 80kph.

That being said, there isn’t a rush of acceleration that comes in unlike its competitors, the Peugeot Traveller goes for a more linear feel which is great for passengers. While the 2.0-liter turbo diesel may not seem like it has much to offer it can quickly get the minivan up to speed if you want it to. The 8-speed automatic transmission shifts quickly and is smart enough to put you into higher gear when you just want to cruise around and save on fuel.

One thing we do have to note is that the braking action on this particular unit that we got felt a bit assisted as the pedal had some play to it before you would feel the brakes actually bite. It's not a bad thing as the car was able to stop fairly quickly but it's something a new owner or driver will need to get adjusted to. The Peugeot Traveller comes powered by a 2.0-liter turbo diesel engine that produces 150hp and 340 Nm of torque. While it may not seem like a lot on paper, this powerplant is more than enough to rocket the minivan to highway speeds in a matter of seconds. In fact, the Traveller has a zero to 100 time of approximately 12 seconds which isn’t bad for a vehicle of its size.

Now on to the good stuff, its fuel efficiency figures In the city we were able to get 10km/L which isn’t bad considering that the Traveller is essentially a big brick on the road, however, where it shines is on the highway. Considering its size and less than favorable aerodynamic shape, we were actually able to get 18km/L which is great for a vehicle of its size. Thanks to its 70-liter tank you can also expect to go at least 600 kilometers or more with mixed-use. The Peugeot Traveller is in a bit of a tight spot, especially against the likes of the Kia Carnival and the Toyota Hiace Super Grandia. All of its competitors aim for a great premium VIP experience, while the Peugeot is aimed more toward a premium family experience. This is where it sets itself apart from the rest.

The Peugeot focuses more on the family aspect of being a minivan/MPV. The seats are great for kids and the versatility that the vehicle offers is excellent if you need to haul people and cargo at the same time. The materials used are premium as well which makes it worth its P3,090,000 price tag. The sound system is also decent with it by default being time aligned towards the center of the vehicle so that everyone can hear.

Overall, the Peugeot Traveller Premium 8-seater is great at what it offers, and what it offers is a premium family van for the whole family. It may not come with the fancy captain’s chairs of its rivals but its seats are still premium and the materials used more than justify its price. It's a great family van with very little to complain about.