If you’re a Koreanobela fan, you’ve probably noticed an unfamiliar wing emblem in some of the cars that they’re driving. That brand is SsangYong, and its re-introduction to the local market last year brought 3 new models into our shores. One of them is the Korando compact SUV.

Korando is the contraction of the phrase “Korea Can Do.” It sure can, as this model is listed in the Guinness Book of Records as Korea’s longest surviving nameplate. However, what can this car really do?

To know this, SsangYong Philippines lent the keys to its top-of-the-line variant, the Korando ELX 4x4. So, we took it for a spin (a rather long one) to see if it can live up its nameplate.

Performance
Engine Output (HP), Acceleration, Transmission, Handling 4.0/5
Design
Exterior & Interior Design, Quality, Fit and Finish, Ergonomics 3.5/5
Ride Comfort
Cabin Comfort, Suspension, NVH Insulation 4.0/5
Safety and Technology
Convenience Technologies, Active and Passive Safety Features 3.5/5
Value for Money
Amount of the vehicle you get for the price, Fuel Efficiency 4.5/5
What You Will Like
What You Won't Like
How We Do Our Reviews The Korando’s exterior design isn’t as sleek as its competitors in the compact SUV segment, such as the Hyundai Tucson or the Kia Sportage. However, it has a design language of its own. The beefy bonnet, athletic fender flares, high 180mm ground clearance – all of these make the Korando look like it’s about to embark on an adventure. This particular variant is also equipped with a roof rail – the bike mount accessory is sold separately, though. On the other hand, the presence of chrome accents, LED daytime running lights (DRLs), and intricately designed grille complements the mentioned outdoor-ish features. At night, the huge projector headlamps and vertical LED taillights are in perfect combination with the DRLs for that outstanding look, away from the typical styling of its competitors.

Overall, the Korando’s design is a fusion of classy and ruggedness, which can make it attractive to SUV buyers who are looking for a vehicle that can go rough yet with a hint of style. 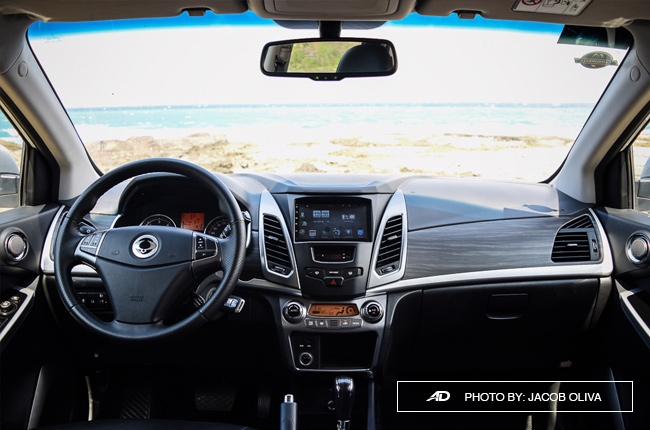 Inside its cabin, the Korando has this overall upmarket feel. Chrome and wood accents are present in the dashboard, while the seats are all covered in soft black leather. Although, some plastic parts at the center of the dashboard are up to your liking. But still, the other polymer components look fit for its class and are soft to the touch.

One of the things we commend about the Korando is the straight-forward dashboard layout that’s easy to understand. The essential buttons for driving can also be accessed at the driver’s seat with ease, while the 7-inch HD touchscreen head unit can be controlled through buttons on the steering wheel. Speaking of the head unit, it can play almost everything (including DVDs) and can be paired up to your smartphone via USB or Bluetooth. Although, it took us some time to familiarize with it, especially the smartphone mirroring, which you would need to connect via Wi-Fi hotspot. Nevertheless, the sound quality was superb; we actually enjoyed listening to all sorts of music during our long drive.

Lastly, what we love about the Korando is the roominess inside. Even though it’s shorter and narrower than its mentioned rivals, the leg-, head-, and wiggle room on both front and rear seats are generous enough, even for passengers with a 6-foot frame. The rear seats can be reclined as well for added comfort.

With that said, the ride with the Korando was loose and cozy; too comfortable, you may need to accept the fact that you have to drive with sleeping passengers. Under the hood, the Korando ELX 4x4 AT variant is powered by a turbocharged 2.0L direct injection diesel engine that can produce 149 hp and 360 Nm of torque. Although these figures are lower than its competition, we felt that it’s just right for its size and weight during our drive. As such, the Korando was not short of pulling power even with 4 passengers onboard plus luggage. However, SsangYong might want to consider isolating the engine clatter. It’s not necessarily a bad thing but a good number of diesel-powered cars in the local market today have better sound insulation.

Amidst the city, the Korando drove well with the amount of horses and pulling power it holds. However, turning is a bit of a challenge since its steering wheel gave us an early morning workout. The brakes were a little mushy too, but not to a point where our safety was compromised. Nevertheless, they did a good job in installing a wide angle camera at the back, as parking on tight spots and backing out on a busy street were a piece of cake. Driving through dilapidated roads and potholes was also easy – thanks to its high ground clearance and soft suspension.

As for fuel consumption, the city drive gave out a reading of 8.2 km/l, at an average speed of 30 km/h. That’s pretty decent considering the added weight of the 4x4 mechanism and the roof accessory. On the highway and provincial roads, that’s where the Korando performed at its best. As expected from a turbocharged diesel, the compact SUV delivered enough power to overtake other cars on the freeway. Although, there’s a bit of a delay when it comes to its 6-speed transmission; we heard this through the rumbling engine while the gauge reach 3500 rpm before shifting up to the next gear, especially on lower gears.

The steering, on the other hand, was stable on the speedway. The car was steady and planted on the road while cruising at 90 km/h. Moreover, the visibility at the driver’s seat was more than adequate; the A-pillars didn’t serve as a distraction.

On provincial roads, the Korando continued to impress. Driving through the winding routes was smooth, with minimum body roll. Although not light, the steering was on point and wasn’t really an issue. Inclined areas were also a breeze for the Korando as we were able to pull ourselves at 2800 rpm. The Active 4x4 was also a great help, as it gave us confidence in taking on different surfaces such as sand, dirt, and pebbles. If you’re in the market for compact SUVs, you are probably facing the issue of having a lot of choices. However, the SsangYong Korando has proven that it has a highly capable turbocharged diesel engine and has features that are at par with the other nameplates. Although there’s still room for improvements in noise isolation and transmission, it’s all made up for considering its price tag of P1,390,000, which is at least P150,000 cheaper than the other range-toppers in its segment. In addition, the Korando is a great comeback vehicle for SsangYong and a great representation of what Korea can do. We just hope they give out free Kimchi when you buy one.