You’re driving around the city and a traffic enforcer suddenly pulled you over. What would you do? Good thing, the Metropolitan Manila Development Authority (MMDA) listed down 10 things to remember should an enforcer pull you over. In case you’ve been caught for a violation, MMDA Enforcers are NOT allowed to flock to your car. This means only the officer that flagged you down should be the one standing next to your vehicle.

MMDA personnel are only allowed to be in groups during times of special operations such as apprehending smoke-belchers or colorum buses.

According to MMDA, swerving is defined as “movement wherein vehicles shift from one lane to another.” However, they did clarify that motorists can still be caught when done recklessly without precaution or when traffic signs that explicitly prohibit swerving are disregarded.

Traffic Enforcers are not allowed confiscate your driver’s license unless you’re involved in an accident or have accumulated 3 unsettled violations. Do make sure to pay all fines, render the required community service hours, or attend seminars without delay to avoid stacking up offenses.

Other violations that can get your driver’s license confiscated can be seen at the MMDA website.

In the event you have no choice but to hand over your license, the Traffic Enforcer should inform the violation and the ticket validity. If a driver refuses to surrender its license, the plate number can be confiscated in its place in accordance to  Section 74 & 75, MC 89-105.

Of those who’ve committed 3 or more unpaid violations, they will be required to attend seminars and take diagnostic exams.

Only city buses are allowed on the yellow Lane

The yellow lane is reserved for city buses only while the MMDA suggests that provincial buses should take the 3rd lane.

Private cars may use the yellow lane only when exiting EDSA. A transition lane or broken lines can be seen 50 meters before the turn. The MMDA also stated that selective apprehension of private vehicles in the yellow lane are strictly prohibited.

In case, the officer can’t show the official MO he or she can’t issue tickets or let alone apprehend you. 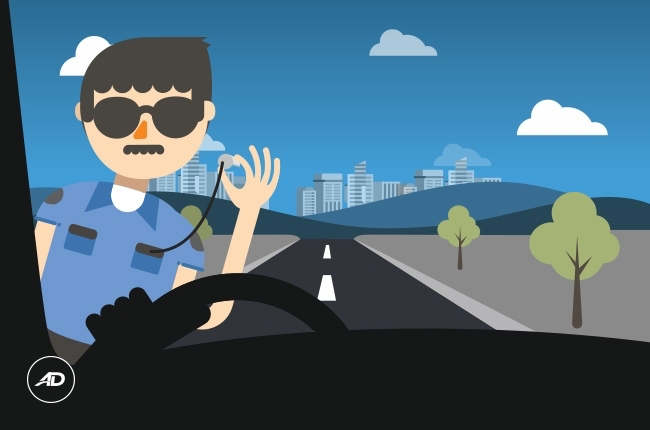 Traffic Enforcers should be in complete uniform

The official uniforms of the MMDA Traffic Enforcers are the light blue long or short sleeved polo shirts while the MMDA Special Task Force wear gray ones. It should bear the enforcer’s name, full name or initials of the office he is part of.

Aside from that, officers should accomplish the Traffic Violation Receipt (TVR) without delay or argument on the road.

Traffic Enforcers are allowed to issue TVRs for towing fee

MMDA Traffic Enforcers are also allowed to issue another TVR for towing fee.

They’re also allowed to issue another ticket in case the vehicle owner fails to get their car from impound after paying the fine. The officer should indicate the number of days it has remained in the impounding area.

Vehicles should be on the road side when apprehended

When the enforcer flags you down, they should safely lead you on the side of the road and politely inform you of your violation to avoid obstruction of traffic flow.

You can’t be forced to get out of your vehicle

Drivers and passengers cannot be asked to alight their vehicle when the apprehension is taking place.

Aside from that, officers are not allowed to ask or take any form of bribery. Likewise, drivers who are caught cannot offer bribes. Know what can be considered as a valid driver’s license

If you were wrongfully apprehended you can contact the MMDA hotline 136 or MMDA Metrobase at 0917-527-7304. You can also file a formal complaint by sending an email with the full name of the officer and details of the incident (with photos and videos if possible) to email@mmda.gov.ph.