After a long wait, The Kia Carnival’s at a point where it is able to serve as a practical MPV and a luxury cruiser. Sitting in the Carnival’s captain’s seat is like flying first class, and the model’s finally at the height of its refinement, and we believe that it is enough to serve as a more affordable and more available alternative to the Toyota Alphard.

Wait, what? The Alphard? Yes, the Alphard. We have to give credit where credit is due, however, as the Alphard has been the leader in the segment selling thousands of units ever since it was introduced in the country. It’s one of the best cars in the segment for a reason and not just because it has a Toyota badge.

Alas, not everyone has the money and the time to wait for an Alphard, and for those kinds of buyers who want something available or who want something a little different but still elegant, we believe that the Kia Carnival has a good chance of stealing garage spaces from wanting minivan customers. As such, here are five reasons why it can rival Toyota’s Alphard. First and foremost, it’s not gasoline. While diesel prices are on the rise as of 2022, it’s still a highly-efficient source of power for vehicles able to save you a bit of fuel economy due to the heaviness of the segment. Minivans are not like sedans wherein you can get away with a low-torque gasoline motor. To haul you and your family along with a two ton body, diesel is the way to go, and the Carnival comes equipped with a 2.2-liter turbo diesel engine that pushes out 199 hp and 440 Nm of torque.

That’s in contrast to the 3.5-liter V6 of the Alphard which admittedly has a reputation for guzzling fuel at a fast rate, especially in traffic. If you want a ferry to take you from point A to point B in absolute comfort and don’t mind the high cost of refueling, then by all means go for the Alphard, but pound for pound, the Kia should be able to save a liter or two on fuel since it runs on only four cylinders and on efficient diesel power.

It still has captain’s seats Having tried the Alphard’s seats, we can say that there’s a little more adjustment when it comes to the Carnival. While you do get a standard recline and ottoman for the second row of seats, Kia one-ups the Alphard by adding tilt to the thrones. While it may seem like a minor thing, a bit of tilt can go a long way for comfort, making the seats feel more like a La-Z- Boy chair than a car seat pretending to be one. We’re not saying that the Alphard’s seats aren’t like the popular recliner brand, but having tested the Carnival, we’d say that gets quite close to the experience.

On top of that, the seats are also heated and cooled. Now, let’s see your La-Z-Boy do that. Kia calls it the Slide-Flex Seating System, and it’s a blast to use with a ton of adjustment options. Minivans not only have to take charge of making you feel like the boss, but they also have to be fit for purpose no matter what jobs may lie ahead. The Carnival is superior in this regard to the Alphard. If you fold down all the seats of an Alphard, you’re not done yet. The rear-most row actually folds up and out of the way which gives you a narrower cargo area which can prove challenging if you have a knack for carrying wide items. The Carnival, meanwhile, has none of those problems, and the floor folds flat leaving you with a tall and wide cargo area.

Stuff for the driver 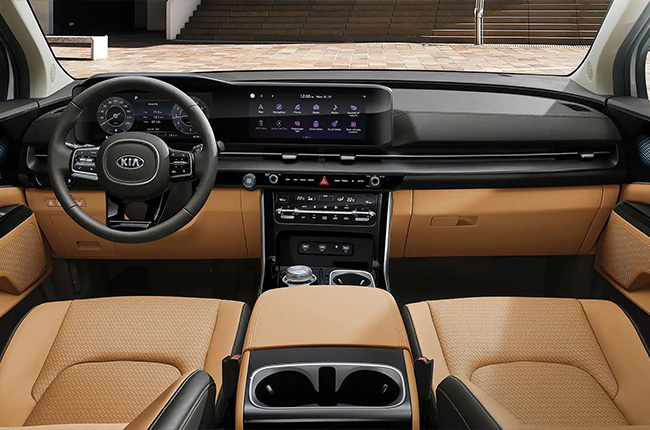 Going to the front, you will find that not only is riding in the Carnival a joy, but it’s also a pretty great car to drive as well. We wouldn’t blame you if you want to take the car out yourself and drive around town. The torque of the motor makes the Carnival up to speed with a reasonable amount of pep, and the unibody chassis does well to absorb a lot of the bumps that may come your way. Numerous safety features are also employed like collision avoidance and even blind-spot monitoring in case you have a little too much fun.

The driving experience is further enhanced by Kia’s advanced displays put on the dashboard. The TFT screen for the driver can output a myriad of information and even input from the Carnival’s camera system. It’s probably the worst-kept secret in the world that the Alphard is popular among Filipinos. That being said, it’s pretty hard to get an Alphard right away without having to sign your name on a waiting list and not get a reply for months at a time. On top of that, you’ll be paying over four million Philippine pesos for a minivan, whereas the Kia Carnival starts at just P2,540,000.

The Alphard features a steep barrier to entry, while Kia can provide you with an alternative straight from its storage lot. You don’t have to wait long for a Kia Carnival, and you get to enjoy it as soon as papers are signed and everything is in order. If you’re willing to wait six months to a few years, then the Alphard is probably worth every second of that wait, but if you want a vehicle now, then the Kia Carnival is ready for you at the nearest dealership. Just give them a call and see what they can offer you.