The Mitsubishi Montero Sport has made a name for itself in the country as being one of the kings of the midsize SUV segment. The third generation of the vehicle in the country brought about a more athletic yet futuristic vibe to the vehicle making people want to clamor over it more. The recent facelift of the Montero Sport added something new to the table in the form of its second-generation dynamic shield front clip. While the design can be polarizing to some, the facelift also brings in more features that were lacking in the pre-face lifted model.

Here are five things to like about the 2020 Montero Sport GT 4x2. The pre-facelifted version of the Montero Sport was already a fine vehicle but it had a couple of convenience features that would have been great additions to the vehicle. Here is where the facelifted version follows up. The newer version of the vehicle now comes with a power tailgate with a kick to open or close function. Handy if you have your hands full or just want to show off. The tailgate can even be opened with a press of a button inside the car and even with the use of a phone app. Mitsubishi Philippines really doubled down on the feature making one of the highlights of the midsize SUV. Out with the old and in with the new. The Montero Sport in its GT variant has opted to ditch the mechanical gauge cluster and has gone with a digital one instead. It might be a point of contention for some but the Japanese brand did a good job with it. There is little to no lag between what you see in the gauge cluster and when you press your foot on the accelerator. The digital display also lets you swap around between three presets, one with the main focus being on the speedometer, one with the focus on the tachometer, and one with a dial-type layout. An innovative feature for a futuristic car. Carrying over with the facelifted model is the familiar 2.4-liter turbocharged diesel engine that is paired with 8-speed automatic transmission. This diesel fed powerplant pushes out 179hp and 430 Nm of torque to the rear wheels. With this pairing, the vehicle can get up to speed quickly without breaking a sweat. Not only that but it can also return great fuel economy figures, coming in with an impressive 7km/L in the city and 17.7km/L on the highway during our real-world testing. In mixed conditions of both city and highway, the vehicle returns about 14.4km/L. Another handy feature in the 2020 Montero Sport is a conventional 220v wall socket found in the second row. This is paired with twin USB ports giving the second row even more options to charge their devices with. The wall socket is ideal for those who want to work on the go and for those who need to charge larger devices.  This feature isn’t only limited to the GT trim of the Montero, as the GLS Premium variant gets it as well. 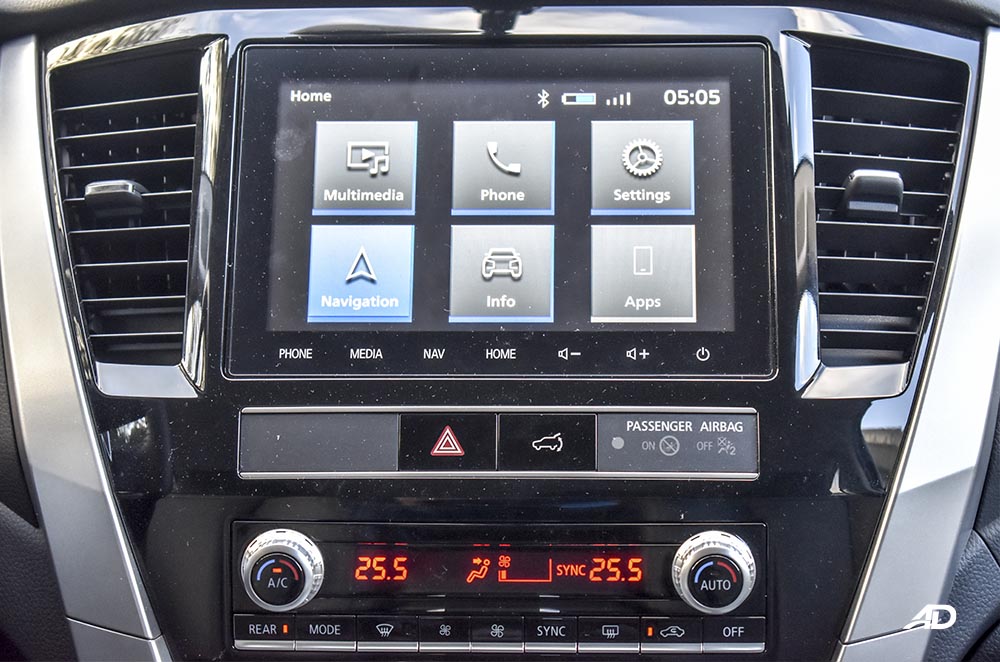 The 2020 Mitsubishi Montero Sport GT comes with an 8-inch infotainment system that comes with Android Auto and Apple CarPlay. Having smartphone mirroring capabilities is a must for the current vehicles on the market. Every day people use their smartphones as part of their daily lives, having it integrated in your car makes it easier for you to stay connected all the time. The vehicle's head unit pairs quickly with your phone and the User Interface is easy to use. You won't be menu juggling to get to where you need to go. If you're opting for the 4x4 version of the 2020 Montero Sport GT it will grant you the option of using the Mitsubishi Remote Control phone application. Aside from the usual Android Auto and Apple CarPlay mirroring capabilities that the vehicle’s infotainment system has, Mitsubishi has upped its game and added a phone app into the mix. The phone applications let you open and close the tailgate from your device, start the engine,  lock and unlock your vehicle as well as turn on its hazard lights, it also can show you your vehicle's statistics such as long term and short term fuel economy, and finally, it even comes with a car finder function. The feature will turn on your vehicle's headlights to help you spot it in a parking lot.