I first met the Honda CR-V when I was a kid and still in its first-gen. I didn't really pay much attention to it since my thing then was anime and academics, but it was so distinct at the time, you could recognize it from afar, even if you weren’t into cars.

This crossover answered the demand of those who wanted something bigger than a sedan, but didn’t want to jump into SUV territory that was then ruled by the Mitsubishi Pajero, Nissan Terrano, and Isuzu Trooper. The 'Comfortable Runabout Vehicle' appealed mainly to well-off college kids and young professionals who wanted a more robust Honda they could throw around while still being cozy inside. It worked so well that it helped create the crossover segment in the Philippines.

It changed with the times, and like the young professionals who bought the first gen, it has now grown up to meet modern needs. The all-new CR-V has a 1.6L turbo diesel and seven seats to meet the market demand – but both are not present in this entry-level variant. Some say it's plain cost cutting while others say it's a nostalgic option for those still hung up on the first gen. In this day of people haulers and high fuel prices, why would anyone choose the CR-V 2.0 S CVT? I took one out for a drive to find out.

(For the purpose of simplification, I'll call my subject the CR-V G since CR-V S CVT is too long, it reads better than CR-V gas, and to differentiate it from the CR-V S diesel 9AT. Variant names, gotta love 'em). The biggest caveat for me with the seven-seater rage is the lack of cargo space. Fill it up with the luggage of seven people and you'll be blocking the rear view of the driver. Trust me, we've done that with a bigger SUV.

The cargo area of the CR-V G is spacious enough for my bags and camera equipment (hidden behind and beneath my bags on the left side), my mom's luggage, and all the pasalubong I was forced to bring.

If you're a young professional, this can easily fit your gym bag, extra shoes, luggage, umbrella, even a foldable table plus chairs for those sudden road trips. Those starting a family will appreciate it too because it can easily stow a stroller without folding the rear seats and still have space for bags and whatnot for those probinsya drives. Even if your kids grow up, it's still enough room for school bags and those big school projects that can be fragile. 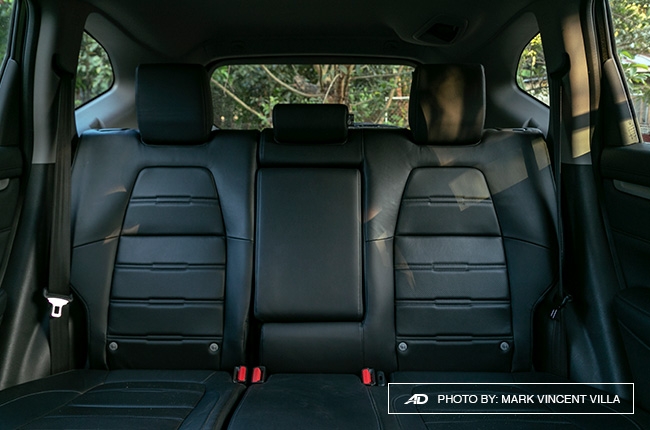 While other crossovers have to choose between passenger space or cargo area, the CR-V was able to balance it out. I'm a fatty, but even I find the driver's seat a tad too much for me. The same can be said for the passenger and rear seats. There's a lot of wiggle room especially if you only put two people at the back. ISOFIX seats won't be a problem and your kids’ Yaya can still fit in the middle comfortably. If you're feeling a bit raunchy, you can do the UV Express seating in here and your passengers still won't complain. You might think that Honda simply placed a gas engine and removed two seats to cut costs and give you a cheaper variant, but you're totally wrong. The CR-V G has almost the same features as the more (read: P200,000) expensive S Diesel 9AT. Automatic LED headlights with auto leveling, 7-inch touchscreen with Apple CarPlay, Dual Zone Automatic aircon, and Lanewatch camera are just some of the features the CR-V G and CR-V S diesel share. Something worth noting is that Apple CarPlay is a device-dependent feature meaning even after many years unless Apple decides to drop it completely, it will still be useful with new iPhones. There's also the safety features like Stability Control, Hill Start Assist, Rear Camera, and airbags all around. Basically, you are treated to a solid and plush ride that will keep you safe. It was a really bold move to put a 2.0L naturally-aspirated gas engine in the CR-V G, considering the price of fuel nowadays. A 1.5 turbo would've been more economical, but I'm not part of Honda's engineering team so we'll discuss what we have here. Anyway, look at it. A big hunk of metal running on a 2.0 gas engine would need magic or a miracle in order to be fuel efficient and yet, it is. Highway runs are 20 km/L, while city driving at night was at an impressive 12.6 km/L and traffic runs were at 7.7 km/L. Take note this was done without Eco Mode. It might be the CVT, or the lighter weight of the car, but either way, it's impressive how efficient it is. It's like The Hulk sipping a mocha frappe via normal straw. 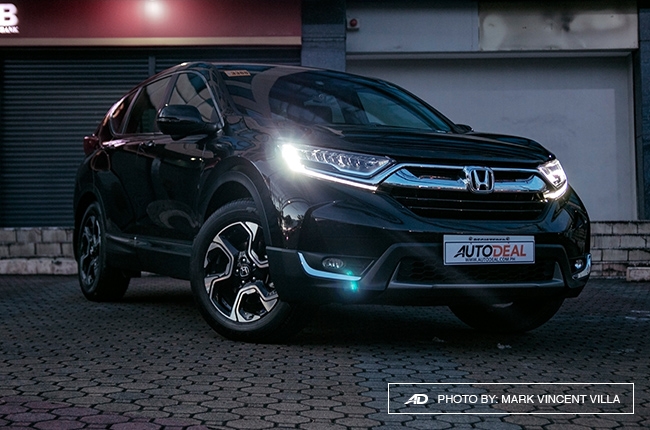 The CR-V was designed with comfort in all driving conditions in mind and it still holds true, five generations later. Road imperfections are absorbed really well, and those un-asphalted roads are less irritating thanks to the great cabin insulation. The light steering makes it easy to drive around in tight city streets, while the LaneWatch camera, which seemed like a fancy gimmick, turned out to be really useful in many situations on the road.

Related: Pushing the boundaries of crossovers with 2018 Honda CR-V

I really appreciated the ground clearance and suspension on unpaved roads as it was able to overcome large tree roots that crawled their way to the path, but lands smoothly when it does so. Big dips on dirt roads, thanks to trucks that regularly pass by, were also no problem for the CR-V G. It might be front wheel drive, but unless you're going through lahar beds and really rocky roads, it's more than enough for your adventures. The Honda CR-V S CVT might not be on-board the ongoing diesel fad in the Philippines, but it doesn't mean it's less of a crossover. If anything, it comes out as a better deal since it's cheaper but you're getting at least 80% of the top of the line model for a price of P1,658,000 – that's P467,000 less. Dismissing it simply as a nostalgic option will be a mistake since it's more than that. It's a crossover that's more than ready to grow with you and your family. Looking at it and reading about it might still give you some doubts but once you drive one, it's easy to accept that you'll be signing five year's worth of cheques for Honda.