From the first generation Civic-based “SUV” to its almost midsize fifth generation model, the Honda CR-V has improved in size, technology, and sales figures. As it enhanced its features, this compact crossover gained greater following from car-buyers, and even created a buzz among the enthusiasts especially when Honda Cars Philippines, Inc. (HCPI) brought in its latest iteration last year.

When the diesel version came in, the rave further heightened. Well, we’re not really surprised because Filipinos, who are trying to beat the sky-high fuel prices, are practically crazy about anything diesel. Even more, this variant arrived with an All-Wheel Drive (AWD) system and an array of smart safety features called Honda SENSING. Given such excitement with the all-new CR-V, it naturally sold like hotcakes in 2017, selling 2,799 units despite the late release in August. If these figures aren’t enough, then look at the roads these days, and you’ll see a lot of Honda’s Comfortable Runabout Vehicle roaming around. (And, yes, that’s what CR-V literally means.)

So, when HCPI extended an invite for AutoDeal and fellow motoring media to test this car, I didn’t think twice. From driving the all-new CRV on a 160-km trip to the province of Bataan; to riding it through an off-road track with sand, mud, and impossible inclines, we were challenged to push the limits of this well-loved crossover — a challenge accepted with a glass of wine in one hand. Not while driving, of course. To get to our destination, we had to drive through the 122-km long (and boring) NLEX and SCTEX highways. It’s such a shame that we couldn’t speed up because there’s a 100 km/h speed limit, and a media convoy apprehended by cops wouldn’t be the most wonderful breaking news.

Good thing, the top-of-the-line CR-V SX that I was driving was equipped with Adaptive Cruise Control (ACC), a feature included in Honda SENSING technologies. Since this safety feature uses radar for the car to “see“ what’s ahead, keeping pace with the convoy was painless. 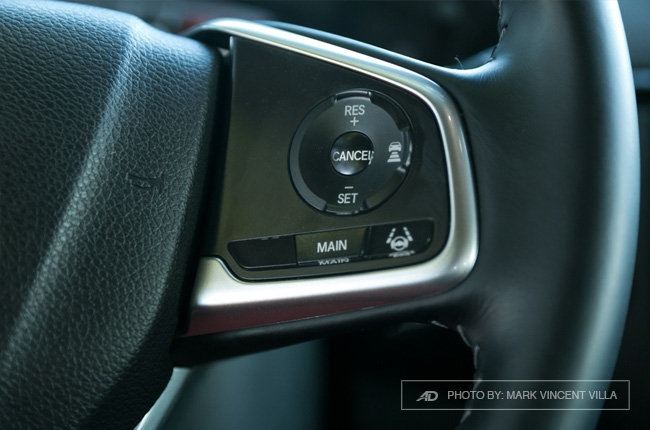 Unlike the usual Cruise Control of other vehicles, where you need to apply the brakes when the car in front slows down, ACC adapts the slower car’s pace and then brings the CR-V back to the set speed when the road ahead clears out. This kept my foot at rest throughout the highway stint. And, since the crossover kept its safe distance, I didn’t feel any uncertainty of ending up in a crash.

The all-new CR-V is also gifted with both Lane Departure Warning (LDW) and Lane Keep Assist System (LKAS). When I drifted out of lanes without using the turn signals, the LDW feature gave audible warnings and vibrations on the steering wheel. The LKAS, on the other hand, steered the car back in the middle of the lane in this situation. Don't worry, it didn't take over the entire car like what you see in some sci-fi movies...but it’s close.

Related: 11 car features you might not know how to use

Some might argue that these high-tech features can make a driver lazy, but convenience is king. And, if you’re someone who drives through highways on a daily basis, you’ll definitely be glad that the car you’re driving has these premium features that you paid for. 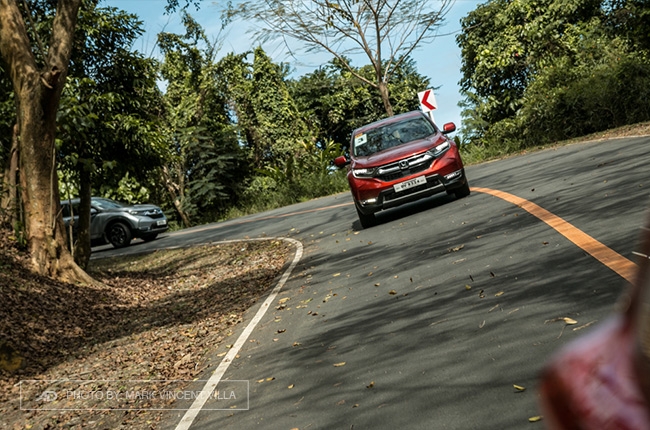 Another highlight of our trip was driving through the uphill (and downhill) zigzag roads when we took a quick detour to the historic Mount Samat. The winding roads were sometimes steep and tight, actually comparable to the Kennon road in Benguet.

With four people and their luggage sitting conveniently inside the car, the CR-V was able to go through them without having to downshift or using its Sport mode. The steering was also precise, which can be attributed to the car’s active AWD system and Agile Handling Assist (AHA).

There was body roll, of course, with the car’s relatively high 208mm ground clearance. To give you a clearer picture, this figure is close to the bigger Mitsubishi Montero Sport’s 218mm space from the ground. This gives the CR-V the edge against its competitors in the compact crossover segment, as it can go places its rivals won’t dare reach — something we were able to prove during our off-roading activity. Whether the surface was filled with dirt, mud, compact sand, or even loose sand, the CR-V was able to deliver. The torque distribution on four wheels was impressive, which was also shown graphically on the gauge cluster display. Steep dirt uphills were easy, as the CR-V SX’s Hill Start Assist (HSA), with its three-second hill hold, functioned well. We also went sideways through a hill, and again, with the car’s great torque distribution, it wasn’t problematic at all.

In addition to the off-road track, we tried the other new Honda SENSING’s Low Speed Follow (LSF) feature. LSF works like ACC, but at 30 km/h. It literally follows the car in front, albeit slowly, but still useful on snail-paced traffic. I can only imagine using this while on the infamous EDSA since I didn’t get the chance to do so.

The other Honda SENSING technologies like Collision Mitigation Braking System (CMBS) and Forward Collision Warning (FCW) weren’t tested, but that’s okay, because these two weren’t really on my list of things I wanted to try. In fact, I highly doubt anyone would want to. With all things considered, I dare say that the Honda CR-V pushes the limits of compact crossovers, and it does so quite exemplary. What’s even great is that it gets the new guns usually available in midsize SUVs, but still retains its more comfortable monocoque construction, keeping the essence of its nameplate.

What’s left to know about the 2018 CR-V? Well, it has seven seats, nine-speed transmission, and powered by the all-new 1.6L Intelligent Diesel Technology Electronic Control (i-DTEC) turbo engine. Will the third row compromise the comfort and space of the passengers? Will this car be fuel-efficient despite its downsized engine? Will it be a great daily driver? Will its P2,086,00 price tag be justified?

We’ll answer these questions when we get our hands on the CR-V SX for an in-depth review soon. Really soon.