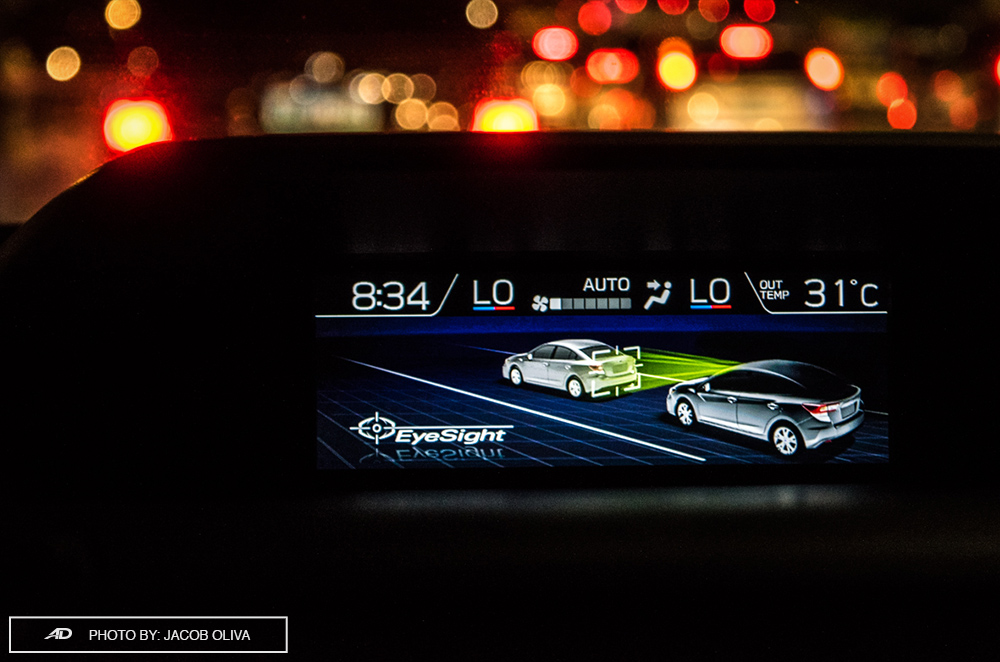 It’s no secret that I’m a fan of cruise controls. As someone who lives in Bulacan and works in Makati City, using cruise control while traversing the North Luzon Expressway (NLEX) is a bliss. So much so, that I’ve written an article on how to properly and safely use it. But the common outcry against cruise controls is this: it’s the car feature you won’t use when driving daily in the city, especially when amidst heavy traffic.

I follow the same sentiment because quite frankly, who needs cruise control when you’re crawling below 10 km/h in the middle of the infamous EDSA, right? Plus, most cruise controls need the car to go beyond 40 km/h (or more) before you can activate them, making the feature useless in heavy traffic. But Subaru begs to differ with its latest and coolest technology called EyeSight – Subaru’s suite of core technologies that use cameras and sensors to assist the driver on the road. Think of it as an extra set of eyes or your guardian angel, as it doesn’t only make the drive more convenient, but safer as well.

I spent several days with the 2018 Subaru XV with EyeSight, dwelled in the city for a bit, and I’m telling you, this feature makes driving in heavy traffic more bearable than it used to. Here’s why. 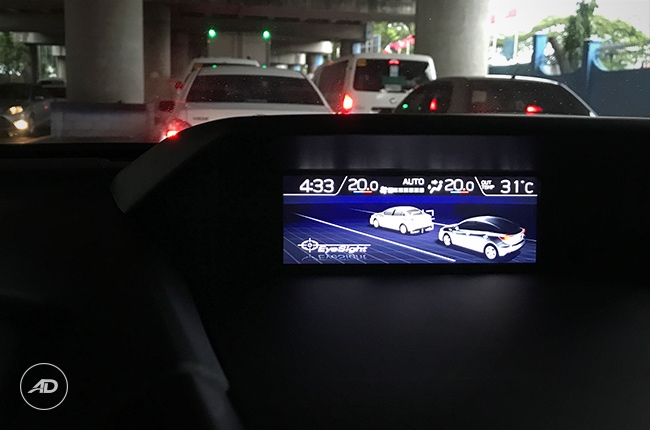 Whether it’s daytime or at night, Subaru EyeSight is perfectly useable during heavy traffic situations. The adaptive cruise control can be switched on as soon as the vehicle moves. This means the car will crawl at a constant speed, following the vehicle you’re trailing. Best part is, since the cruise control is adaptive, it keeps a certain distance with the car in front, which means it will brake by itself without you having to lift a foot.

It notifies you once the vehicle in front moves 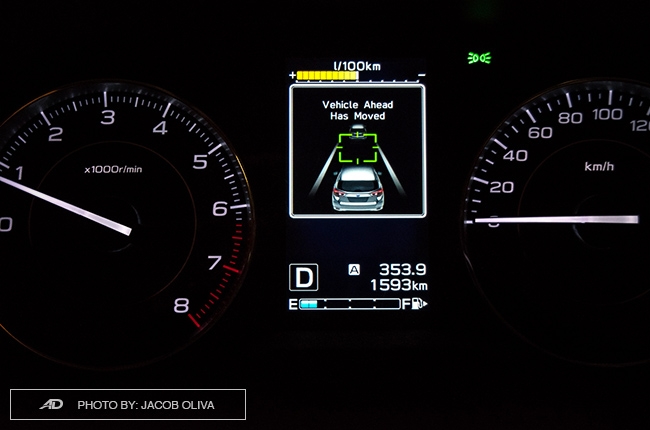 Let’s say you stopped and the cruise control went on standby. EyeSight’s Lead Vehicle Start Alert detects if the car in front has already moved, and quickly sends visual and audible alerts. You will then just have to step on the accelerator a little for the car to move. No need to switch from N to D (or vice versa), engage/disengage parking brakes or keep stepping on the brake pedal. It’s that convenient.

It keeps you in the lane 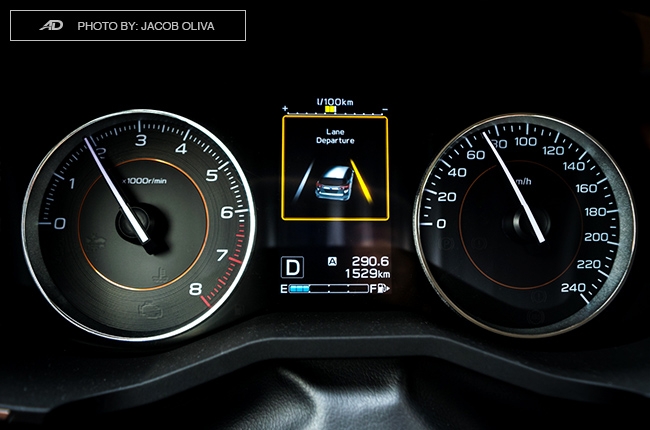 Since EyeSight uses cameras to “see” the road, it can detect lane markings as well. With that, the Lane Sway and Lane Departure Warning will alert you when you’re crossing adjacent lanes without using turn signals. The warning is audible, and won’t interfere with your steering – kind of like your parents riding with you during your first time on the wheel. Still, it makes driving safer wherever you go.

It won’t let you collide with anything 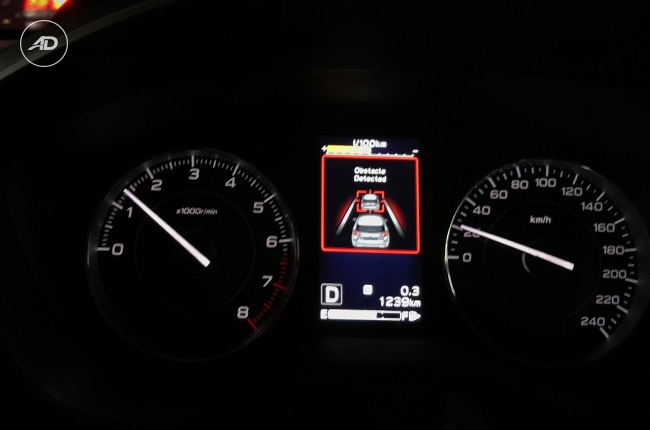 Speaking of safety, EyeSight’s Pre-Collision Braking and Pre-Collision Throttle Management got your back. The former applies the brakes for you when EyeSight senses an impending collision and you’re not taking evasive actions, while the latter won’t even let the car move from standstill if it senses an obstacle right ahead. Trust me, I tested both on EDSA and in a parking lot facing the wall, and they both worked. It’s like your guardian angel, so to speak, and it works in the background without the need to switch on.

It’s easy and convenient to operate 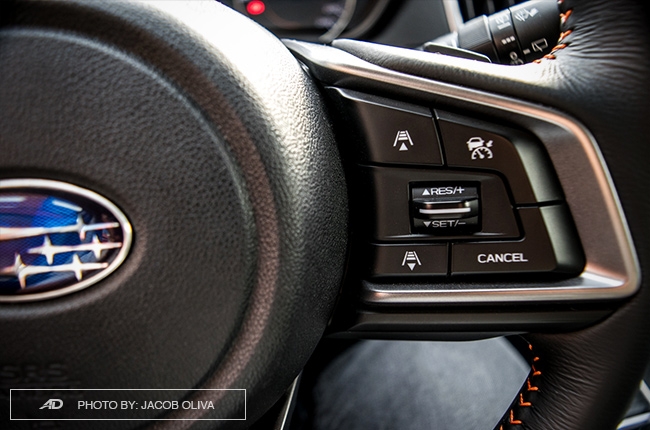 The adaptive cruise control system is easy to understand, and it won’t take a while before you’ll get used to operating the cool feature. Its switch and buttons are also conveniently and ergonomically placed on the steering wheel. Plus, EyeSight is an active feature, meaning it’s always on from the moment you start your engine. Well, you can turn it off, but that won’t make any sense, right?

It’s not as pricey as you think 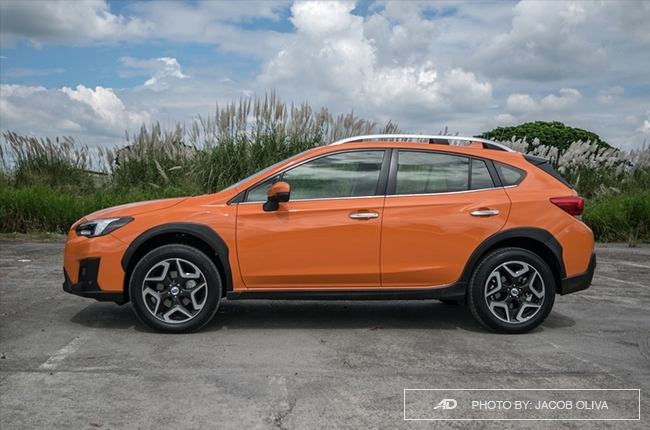 The Subaru EyeSight feature is now available in the 2018 Outback, Levorg, and XV. What’s great about is that it won’t cost you so much to have this feature. The top-of-the-line non-EyeSight XV has a price tag of P1,618,000 as of this writing. To get the one that has EyeSight, you’ll only have to add P50,000 to this price.

Although, I must remind you, Subaru’s EyeSight is a suite of driver-assist technologies, which means these features exist only to aid you in driving and not take over the entire trip. Make sure to keep your hands on the steering wheel at all times, no matter how tempting it is. And of course, eyes on the road.