Weather condition in the Philippines isn't the most forgiving thing. It instantaneously changes and often does it hit so bad, you'd wish you were in a safe bunker isolated on top of a mountain. Seriously, it's harsh, especially when you're driving and in the middle of your trip. As most people say, “when nature hits, you can't really do anything about it.”

Well, that may be argued but there are things you can do while you’re at it – that is, be calm, take extra precautions and stay safe. You must know and distinguish all the rightful things to do from the habits you tend to always do. Here, we pour you with tips that can help you through driving under low visibility. When traversing through fog and rainstorms the first thing you should do is slow down. These two events are the most popular causes of poor visibility on the road. Conditions while in either will go from mild to tolerable and to the worst-case scenario where you would need to pull over and wait for it to pass.

However, even with conditions still tolerable, you still need to be mindful of your speed. Not all drivers have nearly the same amount of visibility as you do and some may not even have the same fast reflexes. That being said, by reducing your speed, you lower the risk of you ending up in a rear-end collision or even being the cause of a much bigger accident. It’s ok to take it slow and not rush as you will still be able to make it to your destination.

Switch on your lights Switching on your vehicle’s lights makes it much easier for other drivers to see you. These include your headlights, foglights, and even your park lights, any light that will make your car more visible will make you easier to spot in a low visibility scenario. It is important to note, however, that you should not turn on your high beams as the light will only be concentrated in the fog, this, in turn, will make it harder for you to see the road ahead.

Should you switch on your hazard lights? Using your hazard lights when you are not in an emergency situation may actually do more harm than good as it may confuse the other drivers. You might be mistaken as a stalled car at a distance, thus leaving you more at risk of getting into an accident. You may also give emergency vehicles are a harder time distinguishing whether or not you are in need of assistance. 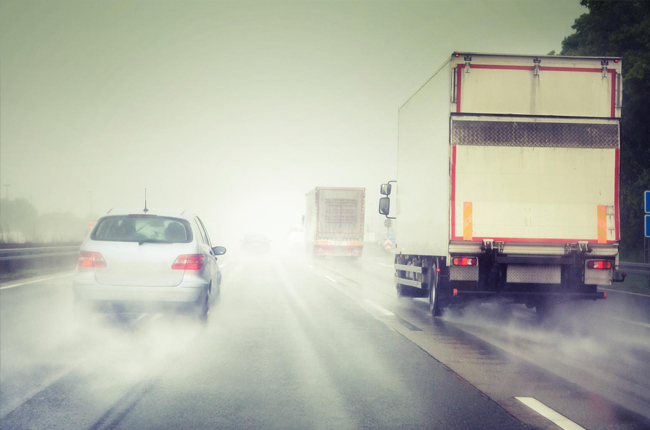 When it comes to low visibility scenarios, giving yourself enough space to react is key. The more space you have to react to a road hazard the better you can think of an action plan to avoid it. Reaction times vary depending on your speed, distance, physical status, and distractions. To avoid smashing on the brakes and sudden steering inputs, you must leave enough room between you and the vehicle ahead.

A good general rule to follow is to allow a two-to-three-car gap between you and the vehicle ahead. This will give you enough time to react in the event that something happens. Another good rule to follow is the three-second rule. Even if the speed increases the distance increases between you and the vehicle in front. You can measure this distance by making a pole or tree on the side of the road as a reference point. Once the car in front of you has passed that object, count to three seconds.

Stay in your lane Another tip that could potentially save you from an accident is to stay in your lane during low visibility conditions. Only change lanes when it is necessary, like exiting a toll ramp on the expressway or avoiding a stalled vehicle.

Make sure that when you are changing lanes to use your signal lights and indicate at least 30 meters away before you intend to make the switch. Assess the taillights in front of you before you make any moves. Use your side and rearview mirrors to check for any vehicle behind you so that you can properly indicate your intent to change. This applies more to two-lane roads than on highways. Even when you see no lights approaching you it is still best to not overtake until visibility has increased. When visibility is low it is never safe to assume that it’s clear to pass. Keep in mind that there may be vehicles out there that have defective headlights. Always drive defensively and widen your mind about your surroundings. Tension in your body may affect your reactions and reaction time. The tenser you are, the more likely you are to commit something bad. Remember not to clench too hard on your steering wheel, sit properly and find your most comfortable position where you could see the road clearly, and don't overthink.

Relax, don't panic. The rainstorm will pass, the fog will dissipate, and you'll get to your destination – just take care and follow these tips.