For a while now, the compact and subcompact crossover segment has been a hot place in the automotive market. For many brands, it's a race of value, with features upon features being thrown at customers for a price that is difficult to resist.

Ford was one of the sole value-for-money crossovers in its segment for quite some time, however, Changan figured that it could do better and threw its hat in the ring with the CS55 Plus. Can the Changan hold a candle against the veteran Territory? Let’s compare the two and find out. 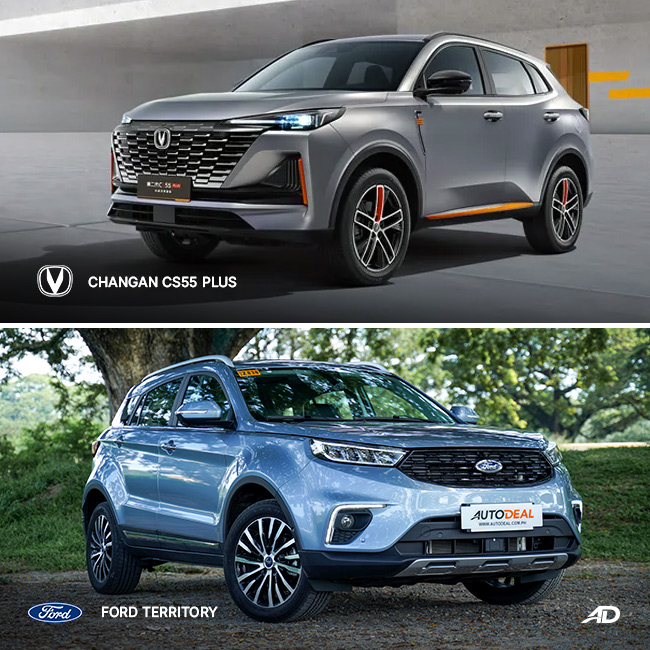 It’s been a stellar few years for the Territory, which has since become one of Ford’s best-sellers in the Philippines. Looks-wise, you get a rather modern-looking front end with a prominent grille between the two LED headlights. While the headlights are LED, the foglights that come with even the top-spec trim are halogen. Quite a number of people actually prefer the look of the Territory and even refer to it as a lookalike of some European crossovers. It’s still got some of that signature Ford boxiness, however, which blends well with the sleek modernity of its overall design. The vehicle also rolls on 18-inch two-tone alloy wheels and the vehicle comes in at 4,580 mm long, 1,936 mm wide, and 1,674 mm on a wheelbase of 2,716 mm. Ground clearance is rated at 180 mm.

While Ford’s turned a number of heads with its design, the Changan CS55 Plus is one crossover that can hold a candle against it. The CS55 Plus nearly doubles the size of the grille and even adds a funky mesh-like pattern. The grille is flanked by only LED bulbs in the headlight and even the foglights. On top of that, there are colored accents found all over the car which can be red or gold depending on what variant you get. On top of that, the CS55 Plus has a very distinct style going for it which is totally modern and can even be described as futuristic. The Changan comes in at 4,515 mm long, 1,865 mm wide, and 1,680 mm tall on a wheelbase that is 2,656 mm long. The wheels are 19 inches in diameter and the vehicle’s ground clearance is 171 mm off the ground. In terms of size, the Territory is the bigger car among the two with the Changan only winning in terms of height and wheel size. The Territory is bigger, so it’s hard not to ignore those metrics, but having halogens when the world is looking for all-LED lights is a bit of a sore spot for the Territory as well as its rather dated styling. A new one is on the way, but the current one is something that we’re already plenty familiar with. The Changan, and the brand in general, is almost totally new to us, and its designs are striking, to say the least. Never mind that it is a relatively new brand in the company, Changan can design some pretty good-looking cars, and the CS55 Plus really takes the cake in the looks department. With all that being said, however, it was a tough call trying to play the objective and subjective cards, but when faced with the choice of what car we’d rather look at our money goes to the Changan most days. When dealing with Chinese-made cars, it’s like a box of Chocolates sometimes, you never know what you’re going to get. In the Ford’s case, opening the doors reveal a leather interior paired with faux wood trim, lots of shiny plastics, and digital screens in a very traditional layout. There have been some people that said the interior feels a bit cheap to the couch in a few areas, which we agree with, but the overall feel is good for most people who don’t really nitpick all that much. It comes with a few pieces of hollow plastic but all the important places are wrapped in soft-touch leather trim anyway with only the center console being fingerprint magnets. On top of that, you get rear cargo capacities of 420 liters with the seats up which can be extended to 1,120 liters with the rear seats down.

Meanwhile, the Changan’s interior is rock-solid. All of the buttons and key touchpoints are solid and all the surfaces are quality materials. There are a few glossy bits of plastic, but they’re mostly out of the way from greasy fingerprints. The layout is not the same as most cars, opting for a gauge cluster that is situated above the steering wheel and not in it. The wheel is also smaller than your average car’s so you get a rather sporty feel just by holding it. On top of that, you also get screens everywhere and the design of these interfaces looks more modern compared to what the Territory offers. While the Changan is a dimensionally-smaller car from the outside, the inside is larger which is illustrated by its cargo capacity. The CS55 Plus delivers 475 liters of cargo space with all the seats up and 1,415 liters with the rear seats folded down.

Our eyes continue to gravitate toward the Changan even on the inside. The Territory has an okay look about it, but the CS55’s just better. The icing on the cake is that the Changan is bigger even with its better interior, so it’s a double-whammy win for the CS55 Plus. Not to take away from the Ford, but Changan knocked the ball out of the park with this one. 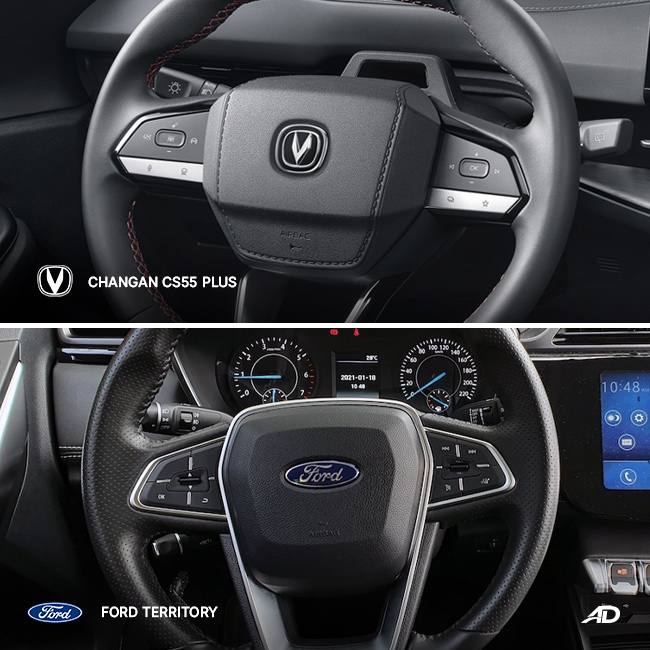 Ford’s known for outfitting its models with some of the latest and greatest tech that the automotive industry has to offer, and the Territory was no exception. Now, the model is pushing about three years old but it’s still one of the best in the business. The adaptive lane-keep assist forward collision warning, and more keep this car very competitive and good for long drives on the highway while other things like the blind-spot monitoring and lane-departure warning make it an overall safer car to drive. On top of that, you also get a 360-degree camera that can get you out of a tight spot if you opt for the Titanium+ variant. The infotainment is also a 10-inch touchscreen with a six-speaker sound system and it also gets Apple CarPlay and Android Auto. While it is fully featured, the interface is not as fluid or as intuitive to use, requiring you to shuffle through menus quite a bit. The gauges are clear and you can change the display mode depending on your preferences as well. Overall, the package is more than enough, and you get a full suite of airbags, six in total, that include the driver, front passenger, side, and curtain, your standard ABS with EBD, and then the collision mitigation and adaptive cruise control.

Meanwhile, the Changan also took a page out of Ford’s book and loaded its CS55 Plus with a ton of tech, more than most people can know what to do with. In fact, the spec sheets are quite similar between the two with adaptive cruise control with lane keep assist, blind spot monitoring, forward collision alert, and also lane-departure warning. Even the camera system in the top-spec trim is the same, though Changan calls it a 540-degree instead of a 360-degree one which is similar in practice. The infotainment system comes in at 12.3 inches, it has a more fluid interface, but the system lacks Android Auto. There is Apple CarPlay, but Android users will have to settle for phone mirroring. The gauge cluster of the CS55 Plus is nice to look at and it gets its own special slot in the dashboard the display is also legible and bright just like the Territory’s. It’s a bit of a toss-up for this one. You’ll be happy in either provided that you’re an Apple user. It’s a bit of a tie as we head into this section of the comparo. While the Changan has a fluid interface, the Ford has a feature that the Changan doesn’t. The driver aids between the two are similar as well so the two tie there as well. It’ll all boil down to whether you’re an Apple user or not, or if you simply prefer an interface that is more fluid and easy to use. In this section of the comparo, it’s a tie. The engine of the Ford Territory is a 1.5-liter turbocharged gasoline motor that makes 141 hp and 225 Nm of torque, which is respectable for most daily driving tasks and a bit of highway duty. The engine is paired to a CVT which returns decent response in slow and expresses a bit of struggle on the highway.

The Changan comes with a 1.5-liter turbocharged motor as well, but it makes a significant amount more power and torque than the Territory. The CS55 Plus makes 184 hp and 300 Nm of torque mated to a DCT which is plenty for highway duty and good for the city.

Due to the figures of the Changan, it wins this section of the comparo. Do note, however, that the DCT may take a little getting used to in the traffic of the city compared to the CVT of the Ford. Regardless, it’s still better to have more power than not enough especially if you need to pass on the highway. 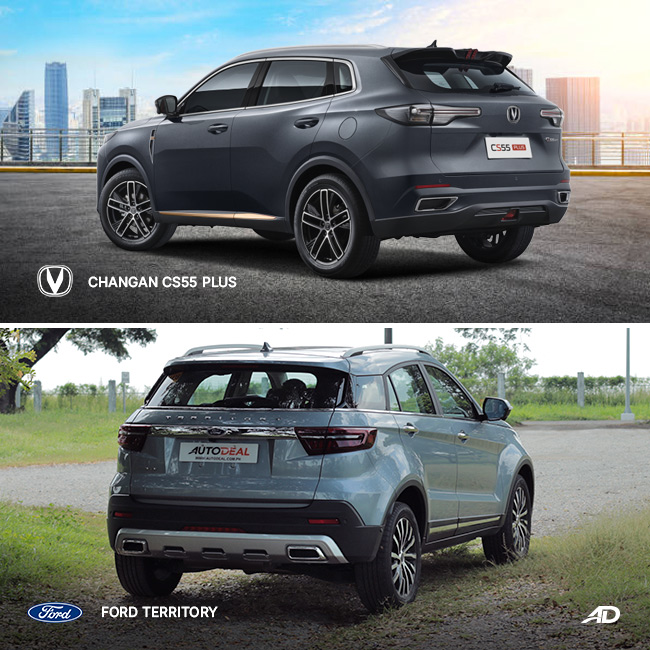 It’s a bit of a surprise to see that the Changan is more expensive than the Ford, even if both have the same country of origin. The CS55 Plus is priced at P1,373,000 for the Luxe variant with all the trimmings and the Ford Territory is priced at P1,310,000 for the Titanium+ variant. A mere P63,000 separates the two, but the CS55 Plus has more trim levels that even go below what the Territory can offer in its base variant. It’s a bit of a tie here if you ask us given the engine specifications and the value that you get, but cheaper is cheaper and the Ford wins this round.

If anything, this comparo proves that you should never discount the new guy. In every part of the comparo, the Ford Territory was matched by the Changan CS55 Plus. Even when it came down to price, both models still put up a close fight with the Changan. Every round had the Territory swinging with the Changan fighting back with all its features.