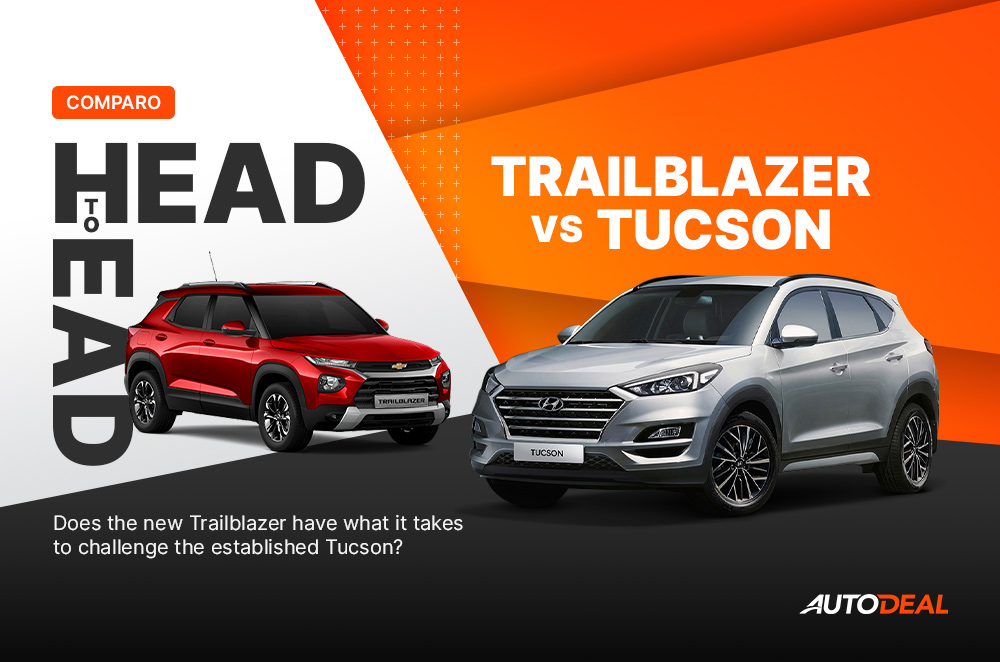 The new Chevrolet Trailblazer has recently hit the market in its new crossover form. With its new form, it brings with it a new set of features that help make it a competitive option for those looking to get a feature-rich 5-seater vehicle.

Now that the Trailblazer is being sourced from South Korea, we figured we would pit it against another South Korean vehicle in the form of the Hyundai Tucson. While it is a veteran of the segment, the South Korea crossover still presents itself as a competitor thanks to its pricing and the features that it brings. With that said, we compare the Chevrolet Trailblazer against the Hyundai Tucson to see which vehicle will come out on top. 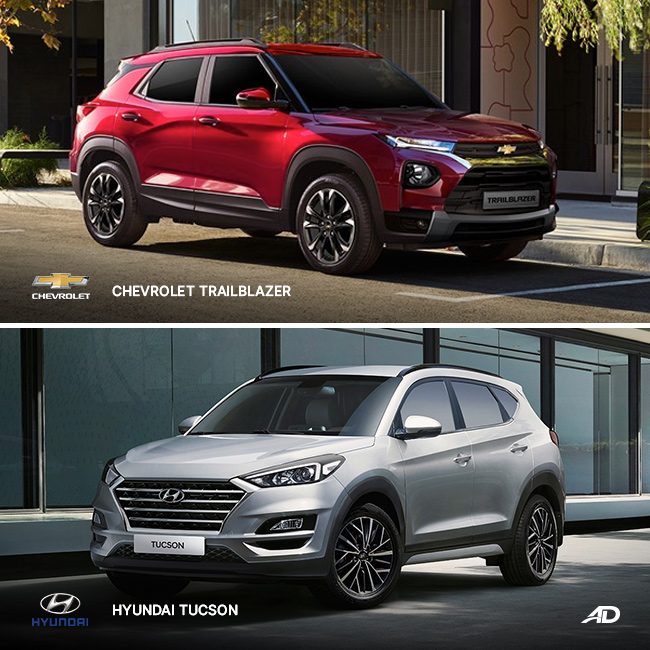 When it comes to the exterior kit of both the Hyundai Tucson and Chevrolet Trailblazer both vehicles are pretty evenly matched. While the Trailblazer comes with more modern styling which many will appreciate, the Tucson comes with a much older design language that has stood the test of time well. It’s simple and to the point, but still gets the job done well. The only difference between the two vehicles’ exterior feature-wise is their headlights. The Tucson is only available with projector halogen headlights, while the Trailblazer can be had with LED headlights for its top-of-the-line model.

With that in mind, we give this category as a tie as there are minor differences between the two negligible models. Ultimately it’s down to your personal preference when it comes to styling and whether or not you want to have LED headlights for your car. 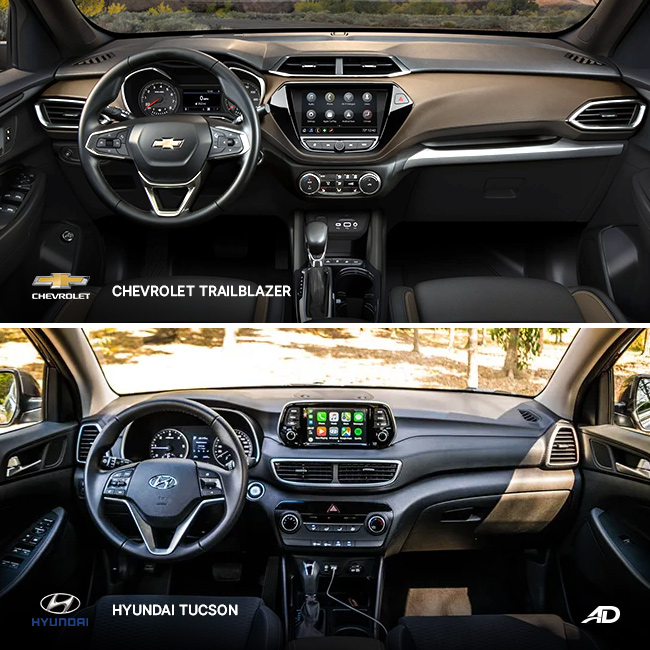 In terms of what they have to offer for their interior design, the Tucson comes with a more direct approach as its design highlights the gauge cluster for the driver as well as the infotainment system. The South Korean crossover also has powered seats for its top-of-the-line model, but its only seat material option is the fabric for its entire lineup.

In the case of the new Chevrolet Trailblazer, it comes with a more modern dashboard design that gives you a better view of the road ahead. Power adjustable seats are unfortunately not available with the vehicle, however, it has leather seats as standard for both of its variants in the local market. It also comes with automatic climate control which is a feature that is also found in its South Korean counterpart. 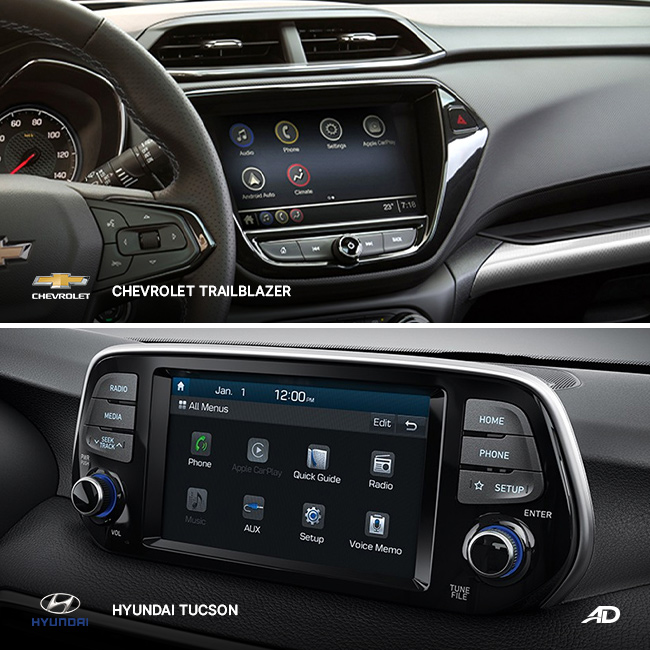 For this category, we award the win to the Trailblazer as it comes with more modern standard technology that many will surely appreciate. Despite it not being available with power-adjustable seats, it does come with leather as its seat material as well as a bigger infotainment system. 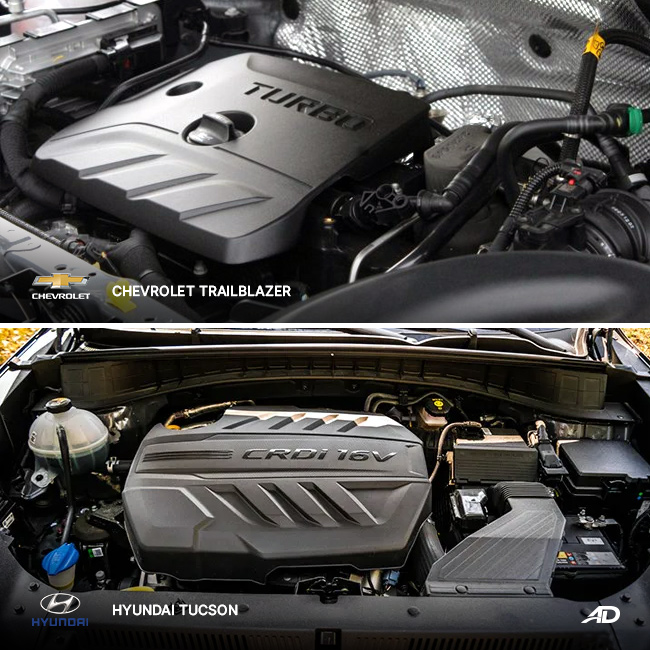 When it comes to the engine department, both crossovers come two very different selections of motors under their hoods. The Trailblazer is powered by a 1.3-liter turbocharged gasoline engine that produces 155hp and 236 Nm of torque. It sends power to the front wheels via a continuously variable transmission. The Hyundai Tucson comes with a selection of engines to choose from. Its lower variants are powered by a 2.0-liter naturally aspirated engine that produces 153 hp and 192 Nm of torque, while its 2.0-liter turbo diesel engine produces 185 hp and 402 Nm of torque. Power is sent through the front wheels of the Tucson via a 6-speed automatic for its gasoline variants, and 8-speed automatic transmission for its diesel-fed models.

For this category, we award the win to the Tucson as its lineup of engines produces more power than the Trailblazer making it the more powerful vehicle out of the two. The turbo diesel motor is also a plus in our books, especially with the rising gas prices. The safety equipment between the two vehicles presents a stark difference. The Hyundai Tucson comes with many of the standard features one would expect from a crossover in its segments, such as ABS, dual front airbags, electronic stability control, rear parking assist, and a rearview camera. However, it is important to note that the lower variants of the Tucson don’t come with electronic stability control, and also lack a rearview camera.

The Chevrolet Trailblazer has the same equipment as its South Korean counterpart but cranks its list safety technology features up to eleven. The Chevy crossover comes with electronic brakeforce distribution, cornering brake control, rollover protection, fading brake assist, panic brake assist, torque vectoring, forward collision alert, and a set of advanced driver assistance features just to name a few. This makes the vehicle the one to choose if you are after safety. When it comes to pricing both vehicles are within striking distance of one another. The Hyundai Tucson is priced between P1,368,000 to  P1,885,000, while the Chevrolet Trailblazer is priced between P1,488,888, to P1,621,888. This makes the Hyundai Tucson the more affordable option if you want to go for its gasoline-powered model, but take note that it is the entry-level variant for the nameplate and as such, it comes with far fewer features. This makes the Trailblazer the more enticing option as it already comes with a lot of standard features that are shared between the entry-level and the top-of-the-line variants.

For this category, we give the win to the Chevrolet Trailblazer as it offers you more standard features throughout its model lineup. This gives you a better value for money option compared to the Hyundai Tucson that isn’t as feature-rich as its Chey counterpart. 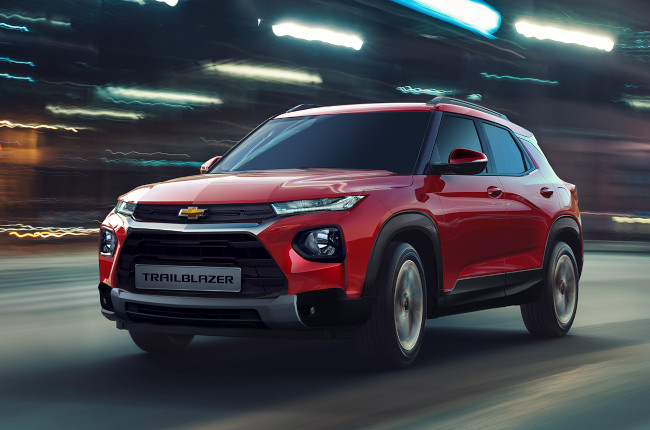 Both of these vehicles come with their strengths and weaknesses. The Trailblazer is the more affordable vehicle overall that has more of the modern features but lacks in the power department. The Hyundai Tucson offers you more power under the hood with its 2.0-liter gas and diesel engines. However, there aren’t as many modern features available with the South Korean crossover compared to its American-branded counterpart.

With that said, the overall win goes to the Chevrolet Trailblazer as it offers a whole lot more for substantially less money compared to the Hyundai Tucson. What it lacks in outright power, it more than makes up for in its safety features and newer technology. Regardless of which vehicle you choose, know that you are still getting a quality product, and ultimately it’s down to your personal preference to pick which one suits your needs the best.