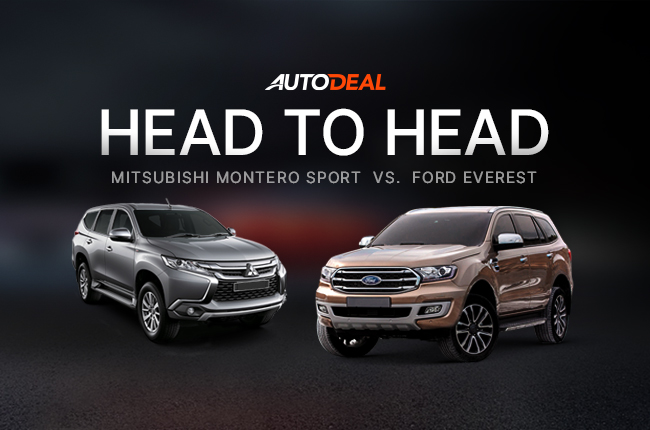 While the Fortuner enjoys being at the top of the sales war, a couple of more intense battles are being waged in order to usurp the throne. Enter the Mitsubishi Montero Sport and Ford Everest, two contenders that would love to sit in the top spot. Both nameplates have claims to fame and provide a very enticing package for consumers looking for an alternative.

These two diesel-powered towers have a lot going for them. From the looks, all the way to the feature-set that is lauded by many journalists and owners. One word can describe these two, and that is compelling. It makes you think twice. So, let us make you think thrice because we’re going head to head on a comparison between the two princes of the segment. There are two kingdoms at play here, nay, two countries. Japan comes in with curves, edges, and sleek lines. Meanwhile, across the Pacific, the Americans are coming in hot with big, burly, and muscular lines. Styling-wise, it’s a subjective matter given that quite a few have not been too fond of the crying taillights that many have bashed Mitsubishi for. Still, it’s an acquired taste, and it looks good to the right buyer.

The Everest enjoys being a bit under the radar when it comes to the exterior. It’s your typical SUV and is quite straightforward in its design. It looks a little bulbous, we’ll give it that, but it’s nothing over the top or controversial; it’s safe.

When you design an SUV for the masses, you’d want to make it appeal to as many people as possible. Again, styling is subjective, but the Montero Sport just seems a more interesting design to say the least. The Everest plays it safe, which is also good. Frankly, it’s a toss. You can take your pick between the two and come out happy either way. Stepping inside, a clear divide between the two brands can be found. Both interiors match their exteriors with regard to the motif, meaning that the lines actually trickle down from the outside to the inside.

The Montero Sport enjoys its edges and diagonal lines. Seating is plush, but variants with manual adjustments might be a bit limited in terms of flexibility. Seats with electronic adjustments, however, don’t have this limitation. Interior plastics are solid and soft touch, but they do tend to feel hollow in some areas, and very scratch-prone in others thanks to a material we aren’t too particularly fond of.

The Everest has one of the nicer interiors in its segment, and that’s saying a lot since there are so many options out there. You have clean-cut lines, not to mention Ford’s Sync 3 system that lets you pair your smartphone via Apple CarPlay or Android Auto. Interior plastics are a little similar to the Mitsubishi, but not by too much.

In short, the Everest edges out the Montero Sport. As far as functionality goes, these two SUVs’ interiors will get the job done regardless of which brand you choose. As to which is better will be up to your budget, as other things can be said when asked Which Variants are better.

As mentioned in the interior segment, the Everest shines in the technology department because of its Sync 3 infotainment system. While the Montero Sport makes do with a basic, but not too basic, unit that at least has Bluetooth connectivity.

With the new update to the Everest, you now get keyless entry with push to start; a feature that the Montero Sport has long had since its launch. To add you also get a power tailgate with a smart feature that lets you open the back with a carefully placed wave of the foot.

Another leg up that the Everest has over the Montero Sport is the presence of USB charging ports and power outlets that let passengers at the back charge their devices without leaving it upfront.

The Montero Sport has a gauge cluster that is more analog than digital. You do get a multi-information display in the middle, but in comparison to the Everest’s “more digital” display, it’s a wash.

You have adaptive cruise control with lane keep assist in the newest rendition of the Everest. On top of that, you also get an active park assist to help get you parked without having to hold the steering wheel. The Mitsubishi has active cruise control too and it does have blind-spot monitoring along with everything that you need that’s not too quirky including hill start assist and hill descent control, which are both found in the Ford. Ultrasonic Misacceleration Mitigation System (UMS) is present in the Montero for added peace of mind, something that the Everest doesn’t have in its arsenal.

Airbags in the top of the line trims are on par with each other. You have a front driver and passenger bags along with side and curtain bags for the rest of the cabin. Back when the Everest had its 2.2L and 3.2L, the Montero Sport met somewhere in the middle at 2.4L, which means customers can enjoy the same power that can be had in the top of the line variants on lower trim levels. Coming in at 181 hp and 430 Nm of torque, the Mitsubishi is no slouch and accelerates with ease. However, given its latest update, the Ford Everest Titanium now can be had in either single-turbo or bi-turbo configurations. While the Mitsubishi has 400ccs more in terms of displacement, the Ford has the same or better horsepower and torque ratings than with only 2.0Ls worth of displacement. The single turbo produces 178 hp with 420 Nm of torque. Side-by-side, the Montero Sport makes more, but only by a small amount. Go for the Biturbo, and you can enjoy 210 hp and 500 Nm of torque; stellar figures coming from “only” a two-liter.

Back then, the Montero Sport’s transmission was deemed very good. Its smooth shifting coupled with a total of eight-speeds meant that the engine could have a wide assortment of gears to shuffle through. The Everest used to have a six-speed, two less than the Mitsubishi, but Ford must have wanted to make the Japanese feel like they did with regards to their six-speed. Ford shoots for the moon and has a 10-speed automatic transmission. Four more gears than prior, and two more than the Montero Sport. This transmission is also refined and lets the 2.0L sip as it hums down the road or highway.

Ford is also known for having the lightest steering and some of the softest suspension with regard to the midsize SUV class. This is one trait that the Montero also shares, but to a lesser degree.

We have to give it to Ford for hitting the nail on the head here. Taken on their own merits, and feature-sets, the Everest edges out the Mitsubishi in a lot of aspects. Some of us at the office have already gone ahead and purchased Montero Sports of our own, and have loved them. The Ford Everest became a more enticing buy as of late due to the refresh.

The Mitsubishi, however, has not received any facelift yet. Other ASEAN countries are already getting their units with an all-digital display, better infotainment, a power tailgate, and a restyled front. Perhaps this facelift is what Mitsubishi needs to tip the scales in their favor. An updated Montero Sport soon, please?