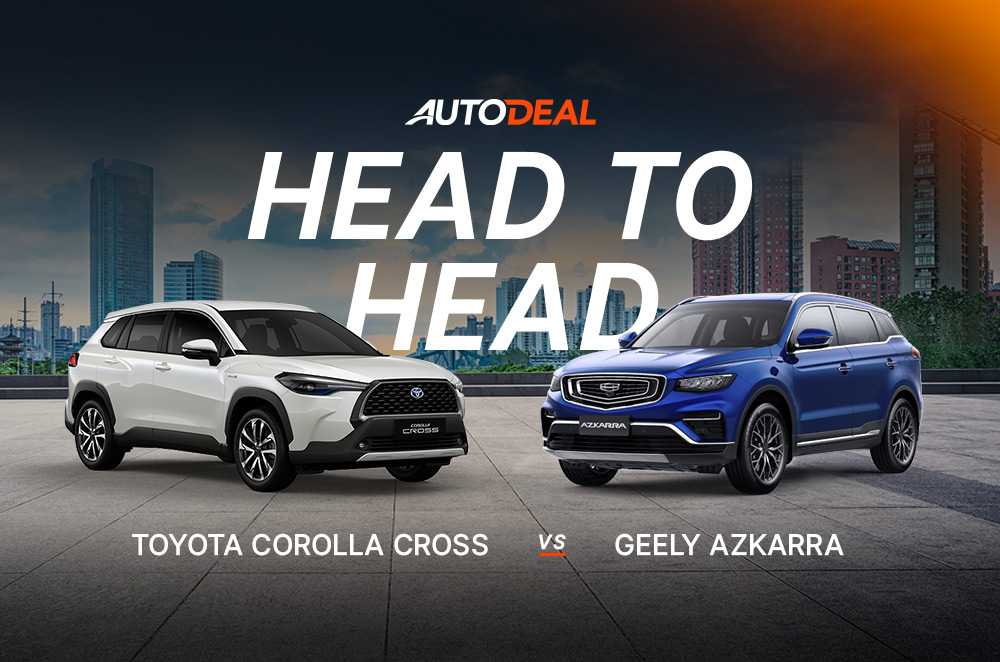 The Crossover segment is one that is rapidly growing in the Philippines as more and more car manufacturers are trying to meet the trend of the market. Toyota Philippines and Geely Philippines as they both have released two crossovers into the segment but with a twist. Enter the Geely Azkarra and the Toyota Corolla Cross both crossovers that come to the market with hybrid variants.

Similar to that of other head-to-head comparisons we will be focusing on what they have to offer the consumer in terms of technology and features. For this comparison we added a new category - the hybrid drivetrain as both vehicles have variants that come equipped with an electric motor. Both vehicles are similarly matched, with design styling out of the way they are both similarly equipped with LED headlights for their higher variants. The Corolla Cross comes with bi-beam LEDs while the Azkarra comes with normal LED bulbs. Where the two differ are with the lower variants as the Toyota crossover comes with projector halogen headlights while the 2WD Azkarra comes with LEDs. This gives the Geely crossover more standard kit when it comes to lights as both the entry-level and range-topping models come with the same lighting system.

In terms of wheel sizes, both crossovers come similarly equipped as the top of the line models get access to 18-inch wheels. The Toyota Corolla Crossover, however, in its G trim loses out as it can only be had with 17-inch wheels. With that in mind, the win goes to the Geely Azkarra as it offers LED lighting as standard for its exterior features along with bigger wheels. 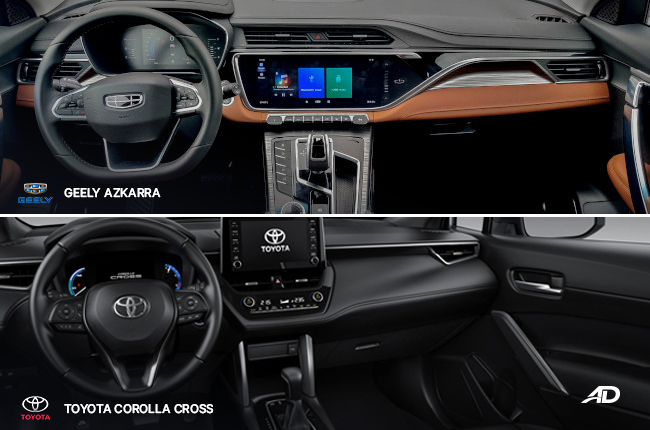 Moving on to the inside of the two vehicles and the first thing that stands out is how different the approaches are from one another. The Geely Azkarra greets you with a brown and black leather interior accented by a gray headliner. As far as ergonomics are concerned with the Geely crossover everything is easily within reach including the shifter which is positioned higher up close to the infotainment system. Seating material for the comes in either PVC or in Nappa leather giving the vehicle a premium feel for the AWD Hybrid variant.

The Corolla Cross, on the other hand, goes with a much more simple and utilitarian approach. While you do get leather seats for the V hybrid variant the interior remains the same as the Toyota Corolla Altis that it is based on. It comes with a black-themed cabin and a gray headliner. It is important to note that the G variant is only available with cloth seats. Also, there are piano black plastics present in the vehicle which could result in unwanted scratches down the line. 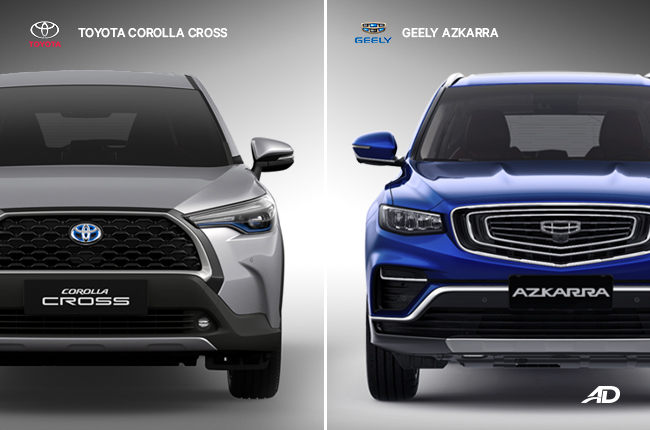 When it comes to standard safety features both vehicles are again evenly matched. Both the Corolla Cross and the Azkarra come standard with 7-airbags, ABS with ED, traction control, Hill-start assist, and electronic stability control. Where the Geely crossover has an advantage is in its hill descent control feature, park assist feature, as well as its 360-degree camera.

With its plentiful driver aids that not only help make driving the vehicle easier and safer when it comes to emergency situations, but the win goes to the Toyota Corolla Cross. 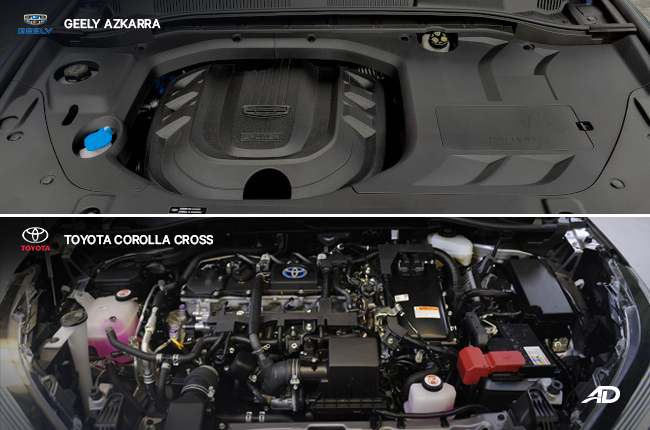 In terms of outright power, the Geely Azkarra has a clear lead over the Toyota Corolla Cross. The Geely Crossover comes powered by a 1.5-liter turbocharged 3-cylinder motor that produces 177hp and 255 Nm of torque for its entry-level non-hybrid variant and 190hp and 300 Nm of torque for the hybrid model. This puts the Azkarra within striking distance of other vehicles in its category that comes with much bigger engines. It is important to note that the 2WD non-hybrid variant comes with a 6-speed automatic while the hybrid comes with a 7-speed wet DCT.

The Corolla Cross, on the other hand, takes a different approach to its lineup. Opting to go for fuel economy and efficiency rather than power the Japanese crossover comes powered by a 1.8-liter naturally aspirated gasoline engine. This produces 138hp and 172 Nm of torque which is a far cry from the numbers that the Azkarra is making with one less cylinder. The hybrid variant actually makes less power than the 1.8-liter gasoline fed engine. On its own, the 1.8-liter gasoline motor found in the hybrid variant makes 98hp and 142 Nm of torque. Paired with the electric motor and output increases to 120hp, however, its torque remains the same.

With efficiency being the goal of these two vehicles we will put it as a tie. We haven’t collected enough data yet in terms of fuel economy to give a definitive winner for this category. Once we do we will be revisiting this match up again to determine which vehicle does it better when it comes to this category. 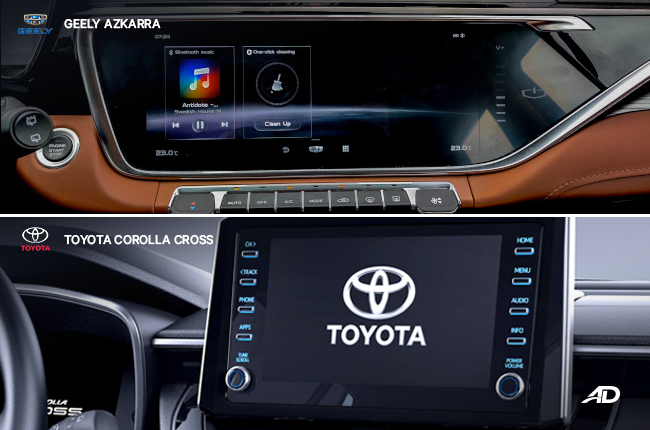 When it comes to technology both vehicles are again evenly matched. The Geely Azkarra comes standard with a 12.3-inch infotainment system that comes with Mirror link. This lets the user screen mirror their smartphone onto the infotainment system of the vehicle. It works in a similar way to Android Auto and Apple CarPlay with a few extra steps. The Geely Azkarra also comes with a smart electric tailgate system for its higher trim model which is a feature that is absent in its Japanese counterpart. It also comes with a 7inch LCD instrument panel that gives the driver all the necessary information.

The Corolla Cross, on the other hand, comes with a 7-inch touchscreen for the G variant and an 8-inch infotainment system for the V Hybrid model. For the hybrid variant, it comes with Apple CarPlay and Android Auto as standard and can even be equipped with wireless charging as an added feature. The regular G variant, on the other hand, comes with T-link and works in a similar way to how the smartphone mirroring system works in the Azkarra. It can be a hit or miss feature for some mobile phones, however, when it works, it works well.

In terms of gauges, it's the same ones found in the Corolla Altis for both the hybrid and gasoline only driven variant. This could be a downside for those looking for a unique interior look for their crossover. However, it doesn’t mean that the shared gauges aren’t functional as they do their job at displaying the information needed to drive the vehicle with its various modes.

For this category, we will give the win to the Geely Azkarra, while its Mirror Link system might be limited and may take extra steps to connect your smartphone to its standardization of the feature that gives it the edge over the Corolla Cross. Also, the usage of the same gauges found in the Corolla Altis might serve as a turn off to some. Here is where things again differ between the two vehicles. The Geely Azkarra comes into the local automotive market with a mild-hybrid system. This means that while a battery pack is present in the vehicle it is much smaller than that of standard hybrids. This does aid with fuel economy as the electric motor can be utilized to help power the car, however, its electric-only range is severely limited due to the small form factor of the battery back.

The Corolla Cross, on the other hand, comes into the market as a normal hybrid. This means that the vehicle has a fairly large battery pack stored towards the rear of the vehicle allowing it to go a considerable distance on electric power alone. Functioning in the same manner as the hybrid system in the Azkarra the Corolla Cross also utilizes its electric motor to help move the vehicle along with in traffic reducing the dependence on the gasoline engine for power.

For this category, we will give the win to the Toyota Corolla Cross as it is able to enter EV only mode for a considerable distance before having to turn on the engine again to recharge the battery. Having a larger battery pack not only reduces the dependence on the engine but also makes the vehicle less pollutant for a longer period of time.

Here is where things get tricky as the Corolla Cross in its non-hybrid form comes out as the more affordable vehicle. It can be had for P1,285,000 for its G CVT variant, while the Azkarra also in its non-hybrid variant can be had for P1,438,000. This represents a difference of P153,000 making the Corolla Cross G CVT the more attainable and more affordable vehicle out of the two trim-levels

With that in mind, we will give the win to the Toyota Corolla Cross as paying an extra P52,000 does get you better access to the Toyota Safety Sense suite of features which not only makes the vehicle safer but easier to drive as well. When it comes to buying a crossover, you can't go wrong with either of these choices. The Toyota Corolla Cross gives buyers the experience of safety and efficiency, while the Geely Azkarra offers prospective owners a premium-looking vehicle with added fuel efficiency.

For this head-to-head and the overall winner results on a tie at least in terms of raw specifications. Each vehicle brings to the table certain highlights that owners might be interested in getting. The Toyota Corolla Cross brings with it safety as its major selling point thanks to the addition of the Toyota Safety Sense system. While it may not be the most powerful crossover in the segment it does promise to give you fuel efficiency in return, giving you the most out of your well hard peso when it comes to fuel.

The Geely Azkarra, on the other hand, brings to the table performance with the added bonus of fuel efficiency. Not only is the Geely crossover one of the more powerful vehicles in the segment it also utilizes the electric motor to give it a boost in power. The mild-hybrid system also does its best to give you the best bang for your buck when it comes to the fuel you put in.

Whichever you choose both will be a great purchase for those looking into getting a hybrid crossover. If you want to get your hands on one of these vehicles today then we highly suggest using our Buy Online function to make the process of getting your new vehicle go smoothly and quickly.