When it comes to affordable 7-seater MPVs available on the market today, buyers are spoiled for choice. Enter the Honda Mobilio and the Toyota Avanza, both are veterans of the segment but take to the 7-seater market with two different approaches. One offers an SUV-like compact form factor, while the other goes for a longer and sleeker look allowing for more space inside. With that said, we compare the two models to see which one comes out on top and is worthy of going onto your MPV shortlist. On the outside, both vehicles come with almost the same feature set. However, where the two differ greatly is when it comes to their headlights and to their overall designs. The Toyota Avanza comes with the advantage of having most of its vehicle lineup come with LED headlights with only its entry-level model coming with multi-reflector halogens. The Honda Mobilio, on the other hand, comes with only multi-reflector halogen headlights for its entire lineup. This gives a slight advantage to the Avanza when it comes to their exterior kit. Both vehicles do have fog lights, but these are only reserved for the middle and top-of-the-line models. 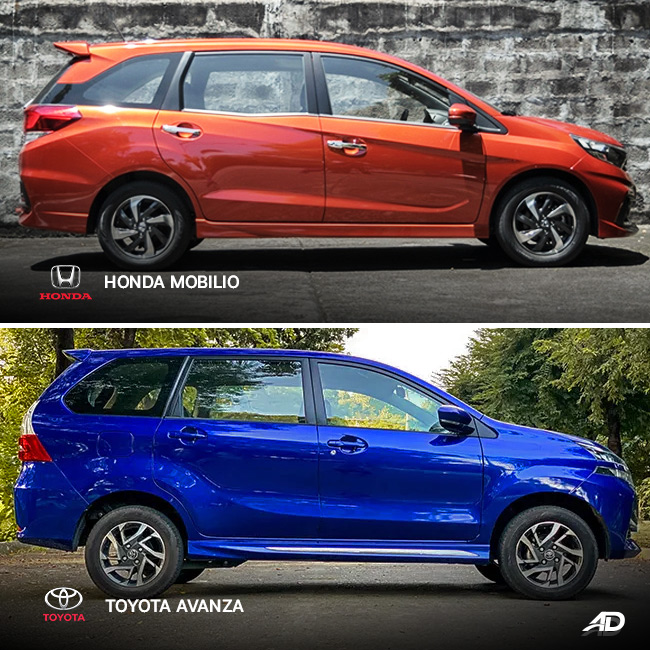 When it comes to styling, two of the MPVs take very different approaches. The Avanza comes with a more squared-off appearance and with an aggressive and more SUV-like front end, especially in its Veloz variant. The Mobilio on the other hand chooses to go for a sleeker and sportier approach which is more evident in its RS model. Two different approaches to making an MPV but both are equally as good at it. With that being said, however, we have to award the win to the Toyota Avanza as it has the more advanced lighting equipment in the form of LEDs. 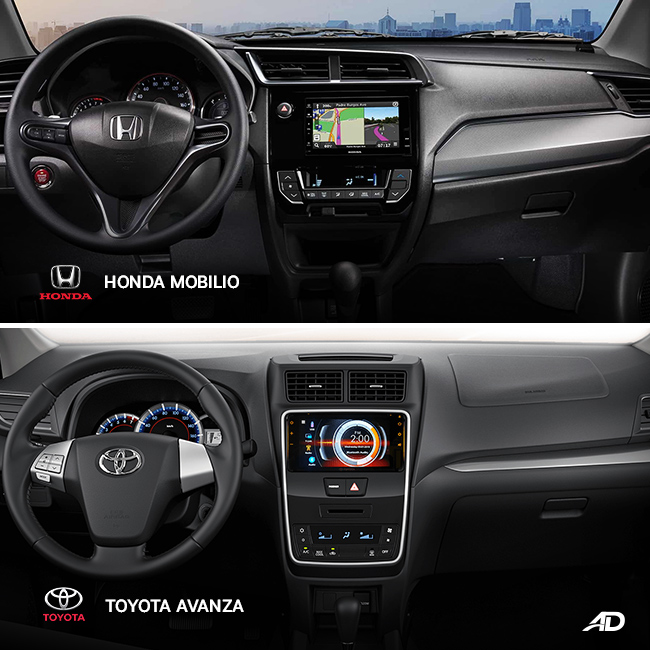 Both are yet again quite evenly matched. The Avanza comes with a more straightforward interior where everything is in reach but is also digitized. The Honda Mobilio, on the other hand, comes with a similar approach, however, the dashboard is slightly higher than the Toyota. The build quality of the Mobilio’s dashboard is also slightly better than the Avanza, however.

In terms of seating material, both are on an even playing field as the only option available is cloth. Seating flexibility is the same as both have seven seats that fold forward. This makes both MPVs easily configurable when it comes to creating more space for cargo or for passengers. Air vents for the rear passengers are also common between the two making it easier to cool the cabin. In terms of entertainment features, both the Mobilio and the Avanza are similarly equipped. While both vehicles do come with 7-inch touchscreens (6.8-inch for the Avanza), the Mobilio comes with the unique feature of having offline navigation. While The Avanza does manage to hold its own against the Honda in terms of standard features such as having AUX-in, Bluetooth, and USB connectivity for two out of its four variants, the same can also be said for the Mobilio. While down a variant, the Bluetooth functionality is present in two out of its three models.

Despite both vehicles not having Apple CarPlay or Android Auto capabilities, the offline navigation functionality gives the Honda MPV a big advantage over its other competitors. To add to this, the Mobilio also comes with a rearview camera further adding to the ease of use of the vehicle. For this category, we will give the win to the Mobilio for having more features that increase the convenience factor and ease of use of the vehicle. For this category, we give the win to the Honda Mobilio as it has the more powerful engine that is standard with all its variants that are available on the market today. 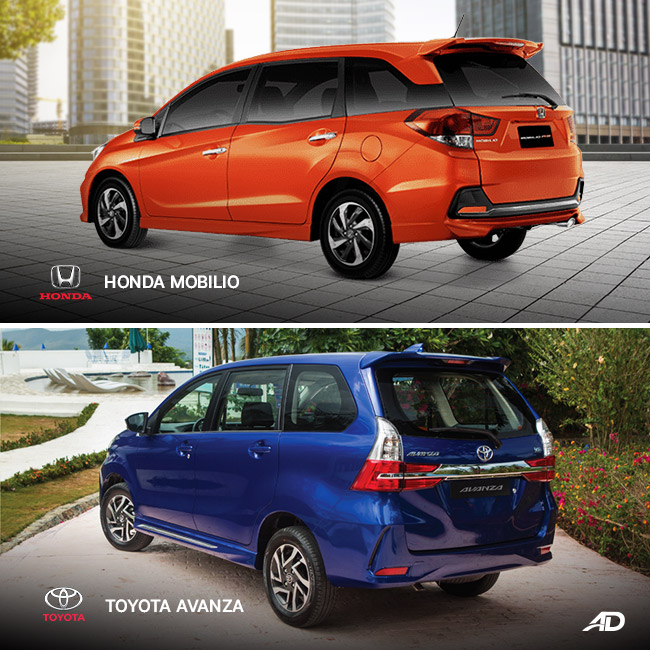 If safety is a primary concern for you and your family when it comes to buying an MPV, worry not as both the Avanza and the Mobilio come well equipped. Both MPVs come with dual front airbags and ABS with EBD as standard, however, the Mobilio comes with a slight advantage as its RS Navi model comes with a Vehicle Stability Assist (VSA) program and hill start assist which are two great features to have especially for newer drivers. This gives the Honda MPV a slight advantage over its Toyota Rival

As far as crash testing is concerned the Avanza was able to get a 4-star rating from the ASEAN New Car Assessment Program (NCAP). The Mobilio, on the other hand, has yet to be tested, but based on its closest sibling, the Brio Amaze, the Mobilio should score about roughly the same as its sedan counterpart as they share the same chassis. Something to take note of, however, is that these reports were based on tests from 2013 and 2016 for the Avanza and Brio Amaze respectively. Since then, the ASEAN NCAP has revised its testing protocols to become more stringent than ever. This means that these results may not hold true if these two models were tested today. As it stands and only comparing the safety equipment that both vehicles have available on the market today, we award the win to the Honda Mobilio. All things considered, it boils down to your budget and your personal preference when it comes to styling. The Toyota Avanza is the more affordable vehicle out of the two as it can be had for as low as P743,000 for its entry-level variant. However, despite being the more affordable choice, you do lose out more on standard features and a more powerful 1.5-liter motor. The entry-level J variant of the Avanza also does not come with 3rd-row seating, so if you want 7-seats then the more expensive E variant is your next best bet.

The Honda Mobilio, on the other hand, has more standard features across its lineup but is only available with two variants in the Philippines. Starting at P895,000 for the entry-level E MT model, the Mobilio is the more expensive model compared to its Toyota rival. It comes better equipped and has a more powerful 1.5-liter engine. As far as the top-tier models go. The Mobilio again comes out as the more expensive vehicle as its RS model costs P1,085,000, while the Avanza Veloz variant is priced at P1,077,000. This represents a difference of P8,000 between two top-of-the-line models, which can be negligible if you consider the features that the Mobilio has.

For the overall winner, we award it to the Honda Mobilio. While it is the more expensive vehicle and is only available with two variants, it comes with better equipment as standard for all of its models available in the country. It also beats its Toyota rival in terms of power output and in terms of the safety equipment it has. Lest we not forget, it also comes with offline navigation for its top-of-the-line model which gives it plus points as not many entry-level MPVs come with this option.