The crossover segment in the Philippines especially within the P1-million to P1.5-million price point is highly contested. We have offerings from all over the globe all trying to get a piece of this very lucrative pie. That being said, back in 2019, Geely Philippines came out of the gates kicking with its hot entry into the crossover segment with the Geely Coolray.

This time, Hyundai Philippines wants to challenge this segment leader with the Hyundai Creta. It's the brand's newest crossover and is part of its refreshed lineup ever since its management change. With the Hyundai Creta being the new kid on the block and the Geely Coolray already being considered as a seasoned vet we will put them head to head to see which one will come out on top with the features and specifications they offer. 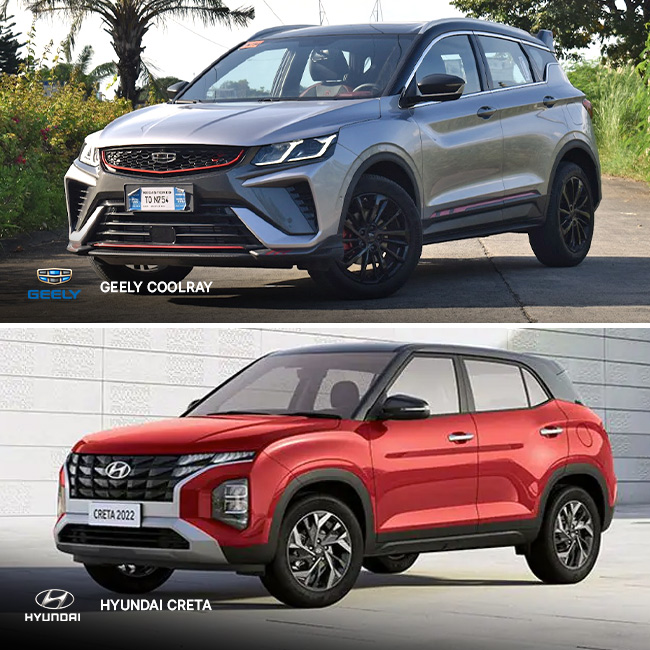 This is a case of sporty appeal versus futuristic styling. The Geely Coolray carries with it a sportier look with sharper angles. Its most recent facelift has also given it a new bumper, a new grille, a new rear wing, and a new design for its wheels as well. It also now comes with red accents found all over the car to again bring home that sporty crossover look.

In the case of the Hyundai Creta, it goes for a more premium yet futuristic design language. Its design echos its much bigger brother the Tucson with a broad front fascia, unique LED headlights, and daytime running lights. It also comes with a more SUV-like design thanks to its overall boxier shape and flared arches. 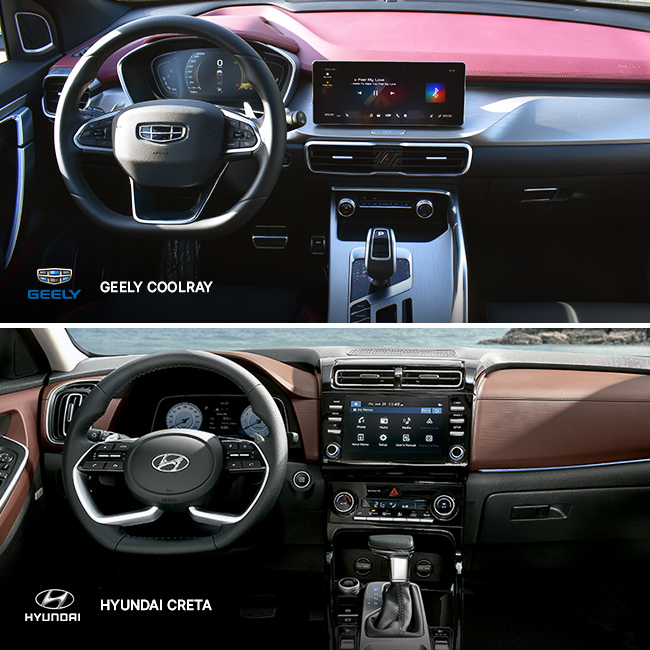 As for the cabin of these two vehicles, the sporty theme of the Coolray continues inside. It comes with a two-tone dashboard with a floating infotainment system in the middle. It has a digital gauge cluster, a flat bottom steering wheel, and automatic climate controls.

In the case of the Hyundai Creta, it too comes with a two-tone dashboard but comes with more premium colors. Unlike its Geely rival, it has a brown and black interior versus the black and red available in the Coolray. This gives it a more premium look, especially with the design of the dashboard that draws attention to the center of the vehicle. Mood lighting is also available, however, only in one color. This was a feature previously also available in the Coolray, however, it was removed for its most recent facelift. 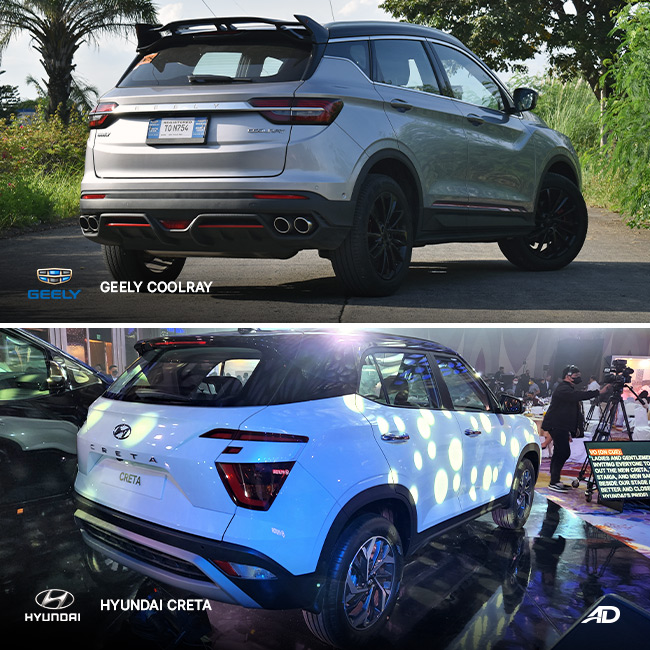 For the tech category, the Coolray right off the bat has an upper hand. While the Geely crossover does not come with Apple Car or Android Auto, it does come with other features such as automatic parking and a 360-degree camera which can be more useful in daily use. Its head unit is also bigger as it comes in at 10.25-inches plus several drive modes which include Eco, Sport, and Normal.

The Hyundai Creta, on the other hand, comes with an 8-inch infotainment system that has Apple Carplay and Android Auto, wireless charging with an air cooling system, cupholder lamps, and finally, USB charging ports at the back and the front.

Overall the Coolray brings more to the table when it comes to the technology that it offers. However, we can’t discount the Creta as it comes with a reverse camera, Apple CarPlay, and Android Auto as well. These are more functional features that one would use daily. That being said, it’s hard to deny the value of functionality over a laundry list of specs you might not find yourself using all the time. We award the win for this category to the Hyundai Creta for its better functionality. 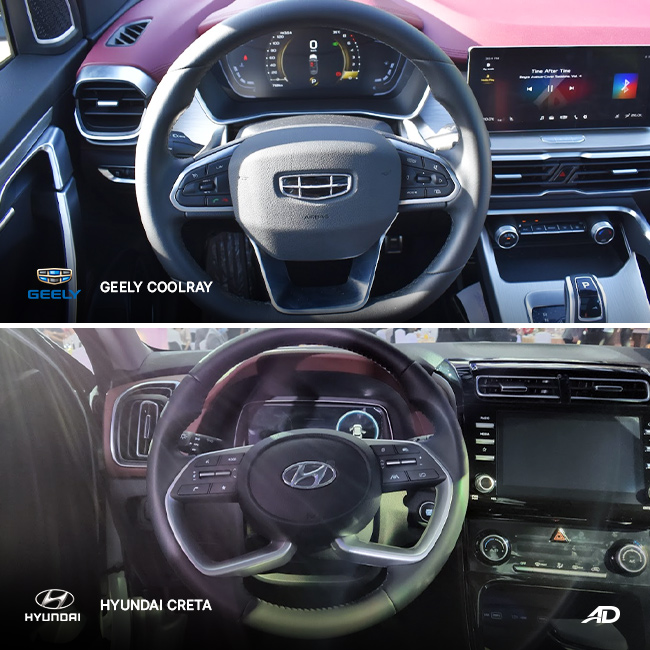 In safety, the Geely Coolray comes with six airbags strategically placed around the vehicle. It also comes with traction control and an array of sensors that aid with autonomous parking. The Coolray was also awarded a 5-star ASEAN NCAP crash test rating, making it one of the safest vehicles in its segment. While it does not come with passive features such as emergency autonomous braking. It's still a good purchase for what it offers at its price point.

With the Geely coming in with an actual ASEAN NCAP crash test score and with the better airbag count, we will award it the win for this category. 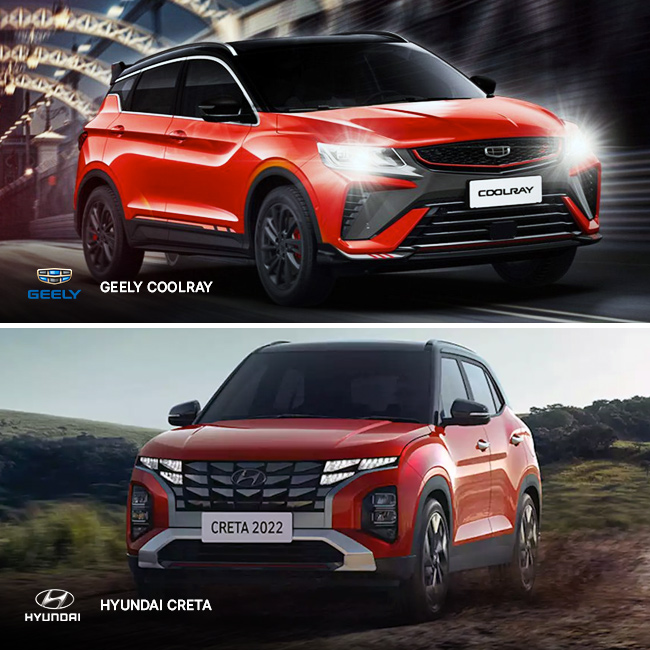 Under the hood, both vehicles are powered by a 1.5-liter gasoline engine, but that's where the similarities stop. The Coolray comes with a 3-cylinder motor that comes with a turbocharger. This combination pushes out 177 hp and 255 Nm of torque. That power is sent to the front wheels via a 7-speed wet dual-clutch automatic transmission.

In the case of the Creta, it comes with a 4-cylinder engine, however, it is naturally aspirated. It produces 114 hp and 144 Nm of torque which is mated to an intelligent variable transmission or a 5-speed manual gearbox. Like the Coolray it is also a front-wheel-drive.

In terms of their specifications on paper, it's clear that the Geely Coolray is the winner for this category as it manages more power with one less cylinder. The Geely crossover is also fairly fuel-efficient with average economy numbers. If you want a more fuel-efficient vehicle and want to skip out on power then the Creta is a good option.

As far as pricing is concerned both vehicles are within the same price range. However, we do have to note that the Creta is the more affordable option out of the two if you are looking at its entry-level variant. The Coolray in its entry-level form is more expensive compared to its South Korean counterpart but does come with more features as standard. Lest we forget, Coolray’s base model is also automatic, so that's something to take note of.

On the other end of the pricing spectrum, the Hyundai Creta comes out as the more expensive of the two crossovers. There is a P63,000 difference between the two when comparing their top-of-the-line variants. Now, this P63,000 can be a lot of money, especially for those working on a tight budget, this means that the Geely Coolray has the advantage so far. It offers you much more for much less.

Overall, the Hyundai Creta is a great option for those who want something a little more premium and just want something that looks good and works well. It isn’t too flashy when it comes to its features and leans more towards the usability side of things which will benefit you greatly. However, if you want a car that has all the bells and whistles plus the performance to match then you can’t go wrong with the Coolray, just be prepared to spend a little more at the gas pump to keep the Geely crossover fueled up. With great power does come great responsibility, especially with your right foot and the increasing gas prices.