Subcompact crossovers have been getting better and better, even at the more affordable range of the spectrum. The Vitara and Kona are Suzuki’s and Hyundai’s latest offerings in this segment, respectively. Both models are modestly priced, and their value propositions may just be right for the taking, but between the two, which is better?

Whether you are looking for Japanese small car sensibility or Korean flare, both models may meet or exceed your expectations in one way or another. So let’s get down to business and compare these two crossovers in a head-to-head comparison. 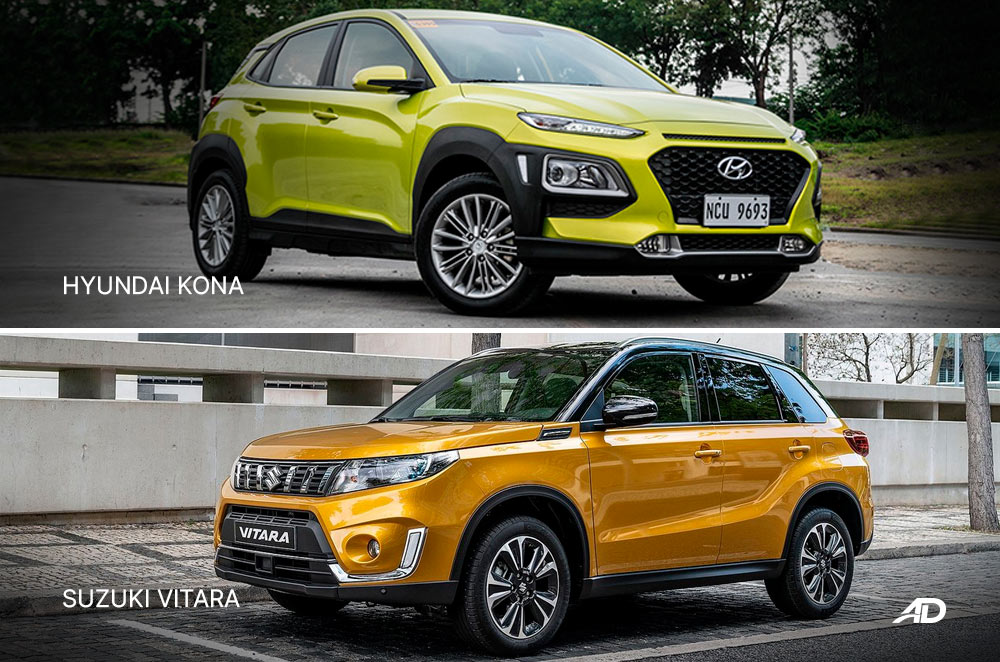 Both models are similarly shaped, but the styling cues employed are immensely different. The Vitara leans more towards the conservative side, while the Kona is more outgoing. Suzuki stuck with simple, while Hyundai has decided to take a gamble and gave its crossover some edge.

Upfront, both vehicles feature projector halogen headlamps but in different areas. The Vitara has its lighting array in the usual space, but the Kona has its emitters embedded in the bumper. It takes some getting used to, and it’s an acquired taste. DRLs can be found on both models, and also a pair of halogen fog lamps. The Kona’s front end is more interesting, but the Vitara gets a little more flair thanks to a facelift in 2019. The grille adds more slats of chrome in the front, but more changes are also present on all sides. 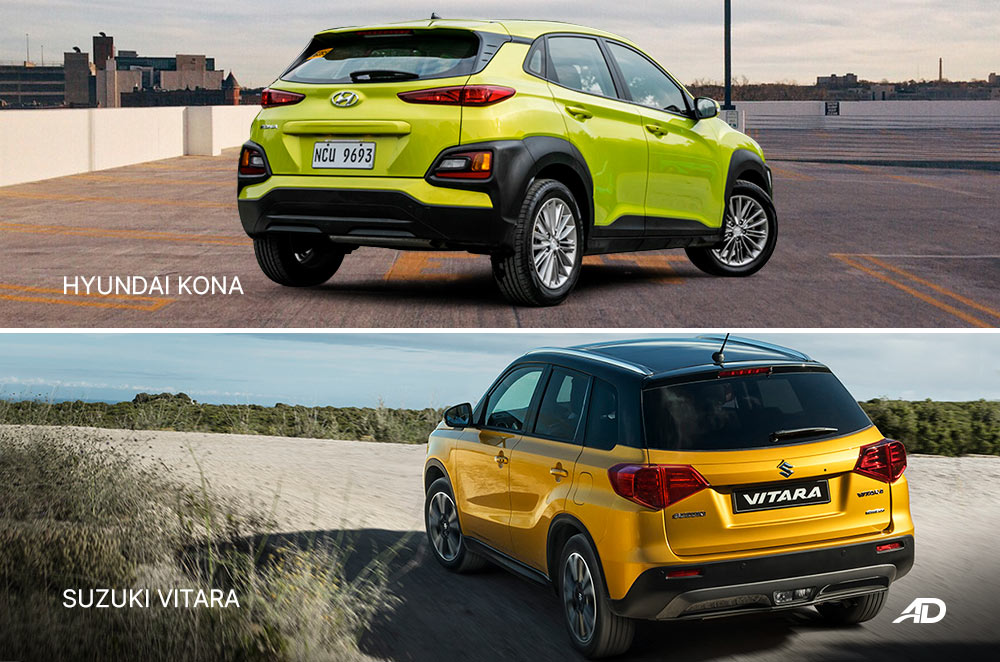 The Kona rolls on a set of 17-inch silver alloys. The Vitara also rolls on the same size wheels, but these rims have a two-tone finish and come in a new design. The roof of the Vitara can be had in a contrasting color for higher variants. It adds visual interest to an otherwise subdued exterior design.

The rear-end design of the Vitara was once uninspired, though, but it now looks a bit better thanks to a pair of LED tail lamps. The Kona does grab your attention from all angles. The rear has more cuts and creases than the Vitara, and the slim LED taillights make it stand out. Perhaps a questionable part of the rear is the placement of the indicator lights down in the bumper.

Overall, the Kona has a lot going for it, but the Vitara has a few elements that tip the odds in its favor. Regardless, if you want conservative cool, the Suzuki is for you, and the Kona is for those who like bolder styling. On the note of style, both crossovers carry a good load of features with them. Both interiors are also made of quality plastics and upholsteries that feel reasonably pliant when touched. Just like the exterior, the interiors reflect the persona of the exterior. You can see simpler lines in the Vitara, while more complex haunches are available in the Kona. The Vitara’s dashboard is more rounded while the Kona’s is more angular.

This is where the Vitara, in its top-spec, makes its comeback, because inside this subcompact crossover is an interior that you would like to be in. Starting off with the upholstery, the Vitara has a combination of leather and suede-like material that covers all seats. In its sole GLS trim, the Kona doesn’t get a leather interior and instead sticks to a fully-cloth set.

You also get more than a handful of goodies in the Suzuki, such as a panoramic sunroof, automatic climate control, and a clock – not a digital clock, but an analog one. These features are sadly absent from the Hyundai, but what the Kona has over the Vitara is an armrest for the back seat. Cargo space and legroom are more or less the same, but the plastic back of the front seats in the Kona might hit a few knees. Suzuki is known for fitting large displays into small cars, and Hyundai has been pioneering the floating display for some time now, but in the Kona, it pales in comparison to the huge 10-inch Android infotainment system of the Suzuki. On almost all metrics is the Kona beat in this regard. The Vitara has a touchscreen display. We say almost because the Kona has more sockets to plug in a car charger or a phone to charge. The Vitara makes do with one USB port and a 12-volt car socket. Audio is output to a set of six speakers for both models, so performance in this aspect is similar. This is where the Kona and Vitara are very similar. Top trims will both get six airbags that cover the driver, passenger, side and curtain categories. Both have speed-sensing door locks as well as ISOFIX tethers.

The Vitara has proximity sensors, however, and the Kona gets no such feature. Considering that the head unit of the Kona is a monochrome display, no backup camera is present. The same can be said for the Vitara, but at least it has sensors. This is where the Vitara is beat because the Kona is a subcompact with a compact’s engine. The 2.0L mill from the Kona dwarfs the 1.6L found in the Suzuki. Hyundai’s motor produces 147 hp and 179 Nm of torque, while Suzuki’s makes 115 hp with 156 Nm of twists. Both engines come with six-speed gearboxes, but the Vitara gets paddle shifters, while the Kona has to make do with its lever.

There is a silver lining to the small displacement of the Vitara. It averaged a 8.1 km/L rating in the city on our review, while the Kona averaged 7.6 km/L. On the highway, the Kona is more efficient because the 2.0L doesn't have to work as hard as the 1.6L. During our test, the Kona managed a 21.5 km/L figure, while the Vitara had 20.1 km/L.

It appears that the Vitara is the better deal among the two. A decision is plain to see with the features on offer, plus the model is updated. At a price range of P913,000 to P1,148,000, the Vitara has a lot of wiggle room for consumers to select which variant is best for them, as long as they are willing to forego a few features in exchange.

The Kona is lacking for the price you pay, and the only variant in the lineup comes in at P1,188,000. The sole variant is not as equipped as the Vitara, and comes in at P50,000 more. But if you want a car that has better road performance, then the Kona should be your pick.