Crossovers are the current hot ticket item to get in the Philippine market. While the subcompact crossover segment is the one that's heating up with more and more options entering the market. The bigger compact crossover segment is also beginning to warm up as well. Enter the Ford Territory and the new kid on the block the MG HS. Both of these vehicles are heating the segment as they bring to the table a host of usable features all packaged in one affordable form factor.

With that in mind, we will compare both of these vehicles spec for specs to see which one will come out on top and to determine which one you should buy if you are in the market for a compact crossover. We all know that style is a subjective topic. What one person may like may not be the same for another. With that said for this category, we are going to look at the dimensions of the vehicles to see which one will offer you more. As these vehicles are within the same price point getting your money’s worth with a bigger car can give you more interior space as well.

It is important to note that both crossovers have similar exterior features, both have sunroofs, both have LED headlights, LED taillights, and both have the same wheel size as well.

For this category, the win goes to the Ford Territory for being the bigger vehicle. 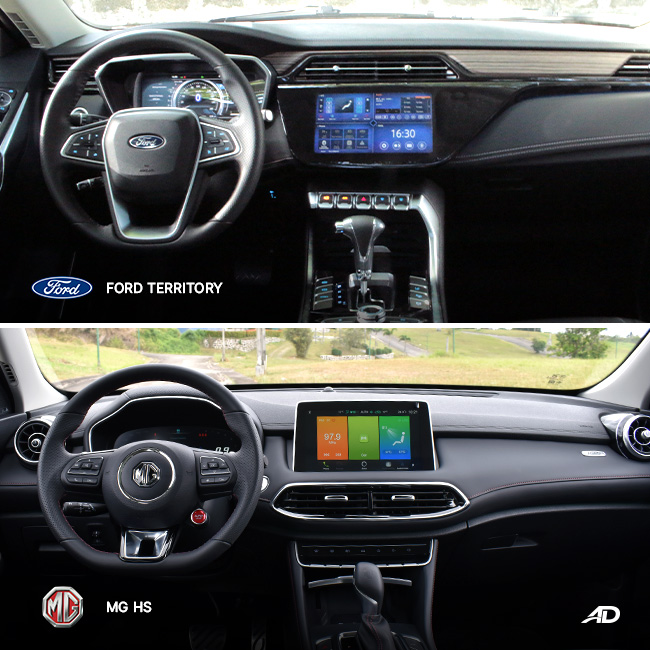 When it comes to the interior of both vehicles, they are similar when it comes to the materials chosen. Both crossovers come with a lot of soft-touch materials, as well as leather in key areas. Both vehicles also have leather seats as well adding to their respective premium look and feel. Power seats are also available for both vehicles, but the Territory comes with 10-way power adjustability versus the HS which only comes with 4-way power adjustability.

While the interior design of both vehicles is subjective to the prospective buyer, we will give this category as a tie as there are only minor differences between the two crossovers. Where tech is concerned both crossovers come very well equipped. Both the HS and the Territory come with a 10-inch infotainment system. Both of these vehicles also come with Apple CarPlay and Android Auto which is a big plus in our books for ease of use. However, we do have to note that the MG crossover does not come with a 360-degree camera, while the Territory has that feature available. This gives the Blue Oval crossover an advantage over its HS rival.

That being said, the win goes to the Ford Territory as the 360-degree camera can be a big help for the driver especially if they are new. For a vehicle of its size, having this feature can aid you in navigating through tight situations or with parking. The safety features of the two vehicles are about the same. The Ford Territory brings to the table a total of six airbags along with other various standard safety features such as ABS with EBD, hill launch control, front and rear parking sensors, lane departure warning, and autonomous emergency braking. The MG HS, on the other hand, comes with a total of four airbags and has the same standard features as its Ford rival. It is important to note, the MG crossover does not come with autonomous emergency braking, but it does come with other features such as cornering brake control, rear cross-traffic alert, rear driver alert, and many others.

For this category, we are going to give it as a tie. While the Ford Territory does come with more airbags, the MG HS brings more passive safety technology that aids in making the vehicle easier to drive and safer as well. Under the hood, both compact crossovers come powered by a 1.5-liter turbocharged 4-cylinder gasoline engine. Where the two vehicles differ is when it comes to their power figures and transmission options. The Territory makes 141hp and 225 Nm of torque and sends power to the front wheels via a CVT. The HS on the other hand from the same displacement power plant makes 166 hp and 250 Nm of torque. It sends power to the front via a 7-speed TST transmission which is MG’s version of a DCT.

For this category, the win goes to the MG HS as it produces more power from the same displacement engine. It has a clear 25hp difference between it and its Ford rival. It also has 25 Nm more torque as well. Pricing presents an interesting scenario for both of these vehicles. The MG HS is the more affordable of the two vehicles as it comes with a price tag of P1,308,888 for its most expensive variant. The Ford Territory on the other hand comes with a price tag of P1,310,000. With just a little under P2,000 between the two crossovers choosing between the two becomes a difficult task. However, since the MG comes with the lower price tag of the two and offers you the most amount of power, we are going to give it a few points for consideration before we end on the verdict. Now for the verdict of the head to head. Here is the thing, the MG HS is the newer kid on the block which comes with more power. While it doesn’t have a 360-degree camera unlike its Ford rival, the specifications that it carries tick more than enough boxes to be a great daily driver for you. To add to this the MG has also been busy expanding its dealership reach in the country which will make it even easier for you to have your vehicle serviced.

However, we can’t discount the Ford Territory as one of the more senior players in its segment. It has an already established lineup of dealerships ready to service your car and a more established number of buyers as well, whom you as the prospective buyer can ask for advice from. That being said, it is about P2,000 more expensive compared to its MG rival, but comes with more of the usable technology that newer drivers would appreciate.

With that in mind, the overall winner for this head-to-head is the Ford Territory as it offers you a little more in the ways of technology. It may not be the most powerful out of the two, but it does offer you a bigger vehicle. Whichever vehicle you pick to win this comparison, rest assured that you are getting a quality product even if you don’t like the outcome of this comparison.