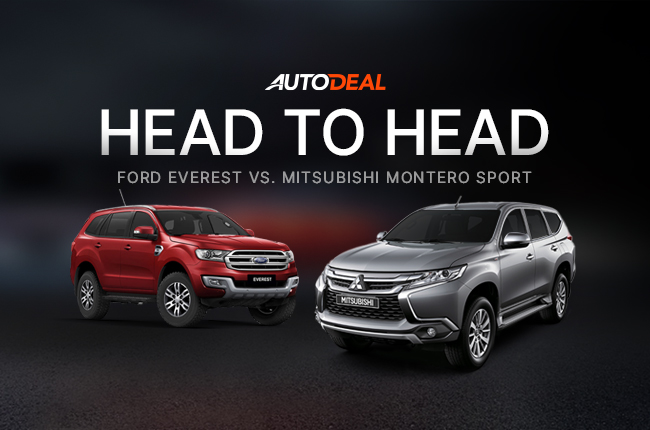 The midsize SUV segment is one of the most competitive markets in the Philippines. While many brands vie for domination, there’s no denying that the Ford Everest and Mitsubishi Montero are top contenders. Offering seven seats, diesel engines, and high ground clearance, versatility is the name of the game, and the brands that have a good combination of performance, comfort, technology, and good looks will come out on top.

So which of these two SUVs do you prefer? In this article, we’ll be pitting them against each other in a number of categories, all in an effort to see which one offers the most compelling package. Spec by spec, number by number; the strengths and weaknesses will help sway buyers, but, in the end, nothing beats getting behind the wheel to find out for yourself. 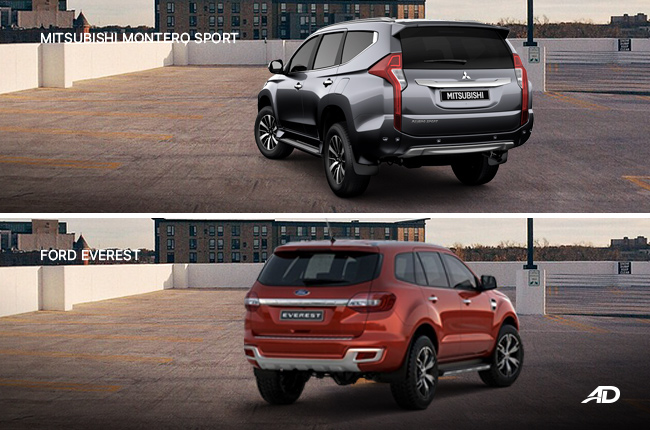 While their overall shape might be the same, the Ford Everest is actually the taller, wider, longer, and has a longer wheelbase than the Mitsubishi Montero Sport. Of course, it could take a keen eye to spot those miniscule differences. Visually, the Montero Sport is a little bit more adventurous in its design, offering more dramatic angles and lighting touches. The Ford Everest is more traditional with its smaller grille and safer design execution in the form of round and chiseled shoulders. Both are big and intimidating, but the Montero Sport just has that added edge of visual flair that some people may be looking for, especially with the dynamic shield fascia.

Top trims get nicer HID or LED headlights for both SUVs, and a tad bit more chromed out plastic bits and bigger wheels. Tiny bits like shark fin antennas, side skirts, and spoilers can be added depending on the variant and available optional parts. 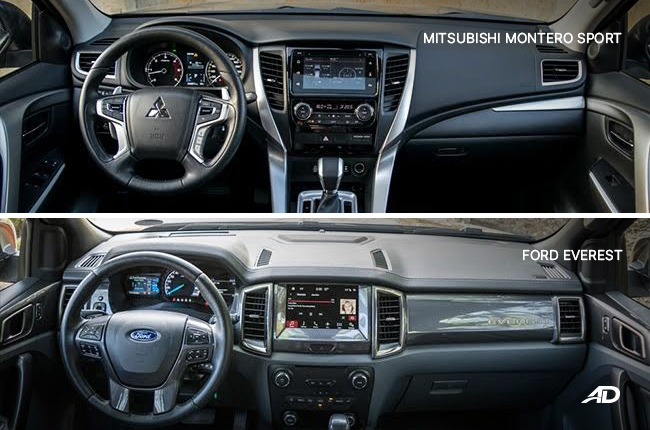 Stepping inside, both the Montero and Everest have the option of leather seating if you go one step up from the base models. Right away, however, you’ll notice that the dashboard of the Ford Everest tends to use a lot more different materials and colors. The Montero plays it slightly safe with soft plastic, leather touches, and aluminum plastic trim pieces. The execution is tasteful, and the buttons and layout of switches is logical and within reach. The Ford Everest also uses similar materials, but adds some more style by adding contrast stitching and panels that run across the entire dashboard. Definitely looks a little bit more premium with the black and grey theme, but the buttons and switches can be a bit cluttered.

Either way, these two midsize SUVs offer some of the best cabins in their class, so it’ll be down to which one feels more comfortable for you to be in. This is where things get very interesting. At base price, the entry level variant of the Ford Everest comes better equipped in the safety end, coming standard with stability control and an alarm system. On the other hand, the Mitsubishi Montero Sport does come with speed sensing door locks, cruise control, and rear parking sensors as standard across the range. ABS with electronic brake force distribution (EBD) comes on all variants. Going one step above base variant for both SUVs gets you at least six airbags, and rear parking sensors finally added to the Ford Everest. Automatic climate control is also standard for both SUVs in all but the entry-level variants.

Going into the higher trims shows that the Ford Everest gains slightly. To begin with, Ford has Sync 3 standard on all variants, offering Apple CarPlay and Android Auto, while the Mitsubishi just has a 6.75-inch infotainment system. Adaptive cruise control comes in at the top trims of each model, and so does blind spot monitoring, lane departure warning, and pre-collision mitigation. The Ford Everest also gets park assist and a power liftgate at its most expensive variant. Both do get terrain modes for their respective 4x4 variants, however. To be honest, it’s splitting hairs, but the Ford Everest has that tiny bit more of a feature set to make it one of the most technologically capable midsize SUVs on the market today. The Mitsubishi Montero Sport comes with a slight advantage over the Ford Everest when dealing with the 2.4L of the former and the 2.2L of the latter at entry level spec, giving more horsepower (181 hp vs 160 hp) and torque (430 Nm vs 385 Nm). In fact, the Montero Sport has the number advantage when it comes to the engine in all trims, save for when comparing it to the 3.2L Titanium of the Everest. Essentially, you can get the more powerful Montero Sport at its starting price of P1,499,000, undercutting the entry price of the Everest at P1,521,000 (MT) or P1,581,000 (AT).

Once you hit the Titanium trim of the Everest, the 3.2L 4x4 package is hard to beat, punching out 200 hp and 470 Nm of torque for the price of P2,288,000. At its top spec, the 4x4 GT Montero Sport sits at P2,164,000, slightly below the Everest at a P124,000 difference. Is the larger engine and slightly more technological features a selling point for you? If it is, go for the Everest. But if you want an powerful, comfortable and safe SUV that’s Japanese, you can’t go wrong with the savings of the Montero Sport.