Retooling a chassis or rebadging a car is a common thing in the car industry. This holds especially true for those manufacturers that are in alliances or want to expand their model lineups without having to invest in a new platform. It opens up the market to more models that prospective buyers can choose from and comes with the benefit of sharing parts which will make maintenance and ownership a lot easier. We all know styling is a subjective thing, what one may like, the other may not. So objectively, we will look at their spec sheets to see which one has the advantage over the other. In terms of lighting, both models come with halogen lighting elements which are fine for their price bracket but it isn’t the latest tech available in their segment. In terms of size, the Livina is longer and wider compared to its XL7 rival. This translates into a little bit more interior space for the Nissan MPV. One thing to note is that the Nissan Livina has multiple variants available for buyers to choose from, while the Suzuki XL7 only has one variant currently available in the Philippine market. 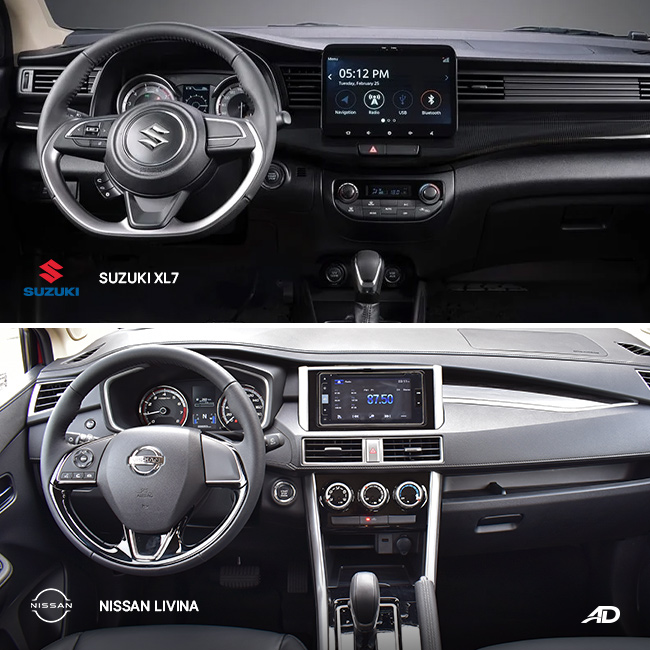 We now move on to the interior comparison between these two vehicles. The XL7 comes with a more straightforward dual-layer dashboard, it does come with piano black plastics which we aren’t fans of but the layout of the controls is easy to reach and easy to use. The Suzuki 7-seater also comes with a large floating infotainment system which looks good in the vehicle and helps give it a more premium feel. In the case of the Livina, it sports a more modern yet minimalistic dashboard, if it looks familiar, it is because this was the dashboard of the 2019 version of the Mitsubishi Xpander. It is still functional everything is within reach but it does come with a much smaller infotainment system.

Overall the XL7 does well to punch above its price point which is why we will give the win for this category to it. It uses its materials despite having piano black as an accent on the dashboard and offers a more unique cabin compared to the Ertiga that it is based on. In terms of technology, the Suzuki XL7 has a clear advantage over its Livina rival. For starters, it carries a larger 10-inch infotainment system that comes with Apple CarPlay and Android Auto connectivity. This is a big plus for us as phone connectivity is now a standard feature amongst most modern vehicles. The resolution of the infotainment system is good and the responsiveness is also decent.

The Nissan Livina, however, is a different story as it comes with a much smaller 7-inch infotainment system that does not support Apple CarPlay or Android Auto. it does have support for screen mirroring, however, you will need to use a 3rd party application to get it working. While it does grant you access to being able to stream apps such as Youtube through the infotainment system, there is a noticeable delay when doing so.

For this category, we award the win to the Suzuki XL7 as it comes with better and more modern features compared to its newer Nissan MPV rival. 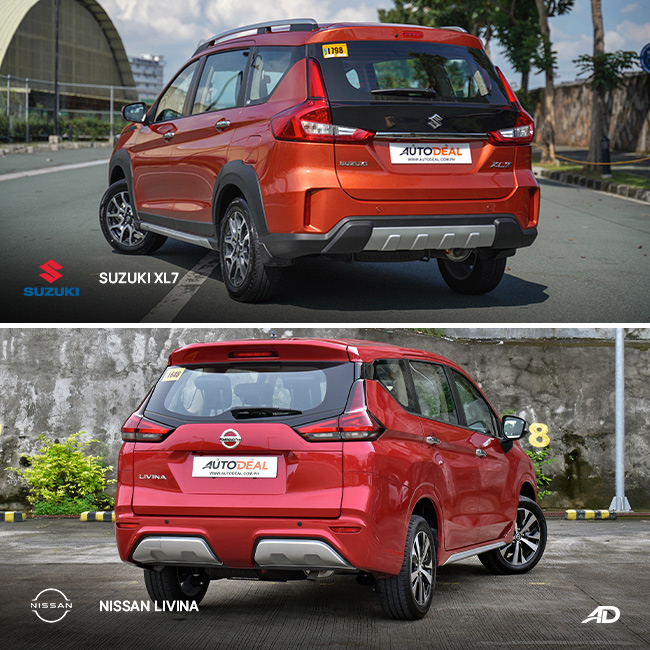 In terms of safety, both vehicles are equipped with the industry standard. This is to say they both come with features such as dual front airbags, ABS, vehicle stability control or an electronic stability program, a rearview camera, parking sensors, and ISOFIX anchor points. The Livina does come with the advantage of traction control but the XL7 has electronic brake distribution which is a feature not present in the Nissan MPV.

As there are only minor differences between the two we will award this category as a tie. You really can’t go wrong in terms of safety with these two vehicles. 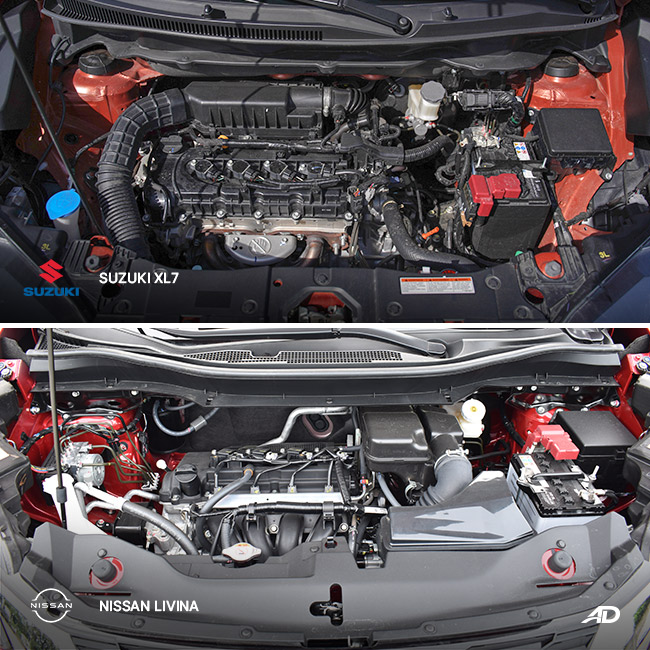 Powering both vehicles is a 1.5-liter naturally aspirated motor. While the engine displacement is the same for both, their power outputs are different. The Livina pushes out 103hp and 141 Nm of torque, while the XL7 makes 103hp and 138 Nm of torque. Both send power to the front wheels and both come with a four-speed automatic transmission available. It is important to note that there is a manual transmission version of the Livina available but it doesn’t come with a lot of features.

For this category, we will give the win to the Livina as it has more torque. This will come in handy when the vehicle is fully loaded and will need to travel uphill. It also comes in handy when needing to overtake where acceleration is needed, though it’s not miles ahead of the Suzuki in terms of performance. When it comes to pricing the Suzuki XL7 is the more affordable option. For its lone variant, it is priced at P1,138,000. In the case of the Nissan Livina, it has several variants to choose from. At its most affordable price point, it can be had for P1,029,000 while at its most expensive it can be had for P1,209,000. This puts it above the XL7 when you compare it with the VL model of the Livina.

Overall, while the Livina is the more affordable of the two thanks to its lower variant, this model doesn’t come with a whole lot of features. If you look at it from a pricing point of view comparing the top-of-the-line Livina with the sole variant of the XL7, the Suzuki comes out on top as the more affordable option. The XL7 bests the Livina when it comes to features and usability, with that said, we give the overall win to the Suzuki as it is not only more affordable but gives you a better value for money proposition.