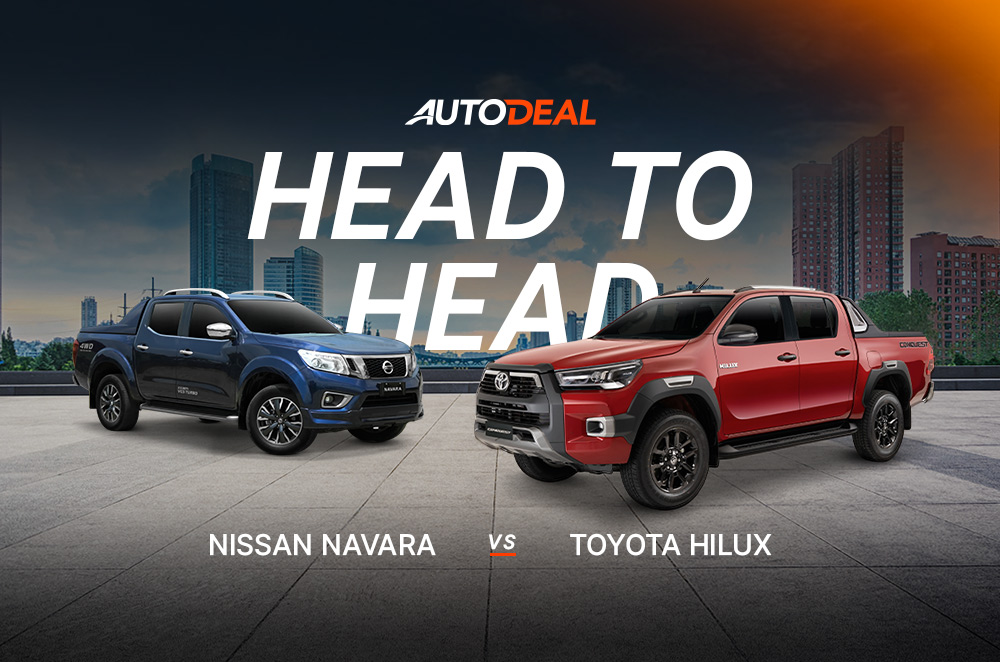 Modern pickups have become better in several aspects. Apart from the wide range of features, the overall packaging has been improved, especially when it comes to comfort and performance. Toyota and Nissan have been in the competition for quite a long time, with its Hilux and the Navara, which was formerly known by many Filipinos as the Frontier during the 90s and early 2000s. Undeniably, both vehicles have built a great reputation in terms of reliability, and it’s probably one of the most important things a buyer must look into when purchasing a brand new pickup. However, as we go a bit more in-depth, we shall see how both of these reliable steeds stack up against each other.

Do take note that this head to head comparison shall be completely based between two range-topping trims, namely the Nissan Navara 2.5 VL Sport Edition AT 4X4 and the Toyota Hilux Conquest 2.8 DSL 4x4 AT. Two of the said models are somewhat closely priced and carry all the bells and whistles that you can possibly get on each of these pickups. With all that said, shall we then proceed? Among these two vehicles, the Hilux carries the fresher looks given that Toyota Motor Philippines (TMP) just released its refreshed model just last year, around September. While we’re still waiting for the refreshed Navara to finally step into our borders, the current model still looks good as it is. In fact, aging quite gracefully and those clean looks still remain as an attractive skin.

Notably, it carries a number of familiar design cues from the Toyota Tacoma. Apart from the new grille and bumper, the Hilux Conquest also gets new LED headlamps and fog lamps which do illuminate the road well at night. The Navara Sport Edition, on the other hand, gets a more subtle look at the front, the grille is treated in chrome along with the fog light housings. LED lighting is only limited to the headlights leaving the fog lamps with regular halogens.

The Hilux Conquest’s rugged theme continues over the side, all thanks to the generous amount of black cladding. Plus, the side mirrors come with blinkers and it's also treated with a shiny black material that’s similar to the door handles. Ingress and egress have been made easier all thanks to the step board, while its shoes are then complemented by a set of 18-inch gloss black alloys wrapped in 265/60 tires.

As for the Navara, the clean look is still well-represented over its side profile. Like the Hilux Conquest, it also gets a step board, however, there’s no application of any black cladding here, instead, the side mirrors that have blinkers and the door handles are treated with chrome instead. Lastly, this midsize pickup comes with a set of 18-inch alloys wrapped in 255/60 tires.

It is worth noting that both midsize pickups benefit from a rollbar and bed liner, although, only the Hilux gets LED taillights while the Navara gets a more traditional pair which still looks good and does function well. Indeed, two of these pickups present a holistic package when it comes to the exterior, however, we’d have to give Toyota credit for successfully bringing the Hilux under the knife for its fresher and more rugged approach, plus, that more capable payload capacity of 1,000 kg does outrank the Navara’s 964 kg. Then again, the Navara Sport shall continue to appeal to those who want that outdoorsy vibes in a subtle presentation. Both pickups don’t look too flashy on the inside. For starters, the following cabins get an all-black layout, there are some trim pieces on each vehicle which gives the cabin a bit of a contrasting factor. Only the Navara Sport having leather upholstered seats, while the Hilux Conquest sticks with cloth upholstery. Another fancy thing about the Navara are the Zero-Gravity front seats which provide elevated comfort levels for both the driver and front passenger. It is worth noting that space is more generous on the Hilux than on the Navara.

Other essential features on both pickups include steering wheel-mounted controls, a push start button along with keyless entry, and an 8-inch infotainment system with a 6-speaker audio system, do take note that both screens come ready with Apple CarPlay and Android Auto for seamless smartphone integration. Only the Hilux Conquest 4x4 gets automatic climate control while the Navara Sport 4x4 comes with manual air conditioning.

We’d probably conclude this round with a tie, given that both vehicles are reinforced with a generous amount of convenience features. Plus, interior quality doesn’t seem to go far against each other, like what I always say, it really is just up to your personal taste, knowing needs, as well as properly considering your budget. 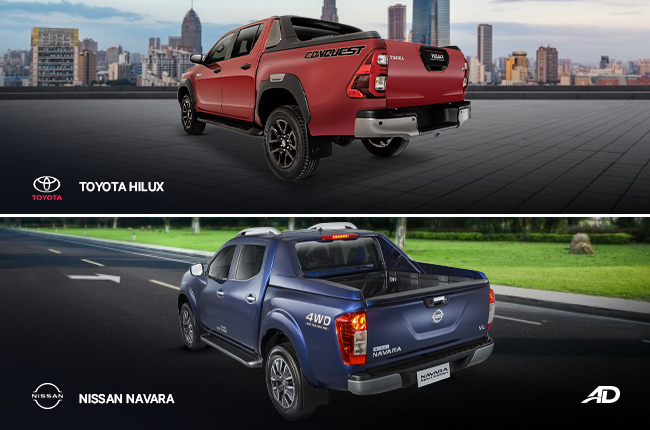 While most competitors in this segment come to have a typical rear leaf spring setup like the Hilux, the Navara, on the other hand, has better ride comfort all thanks to its rear multi-link suspension and coil springs.

Having a stiffer ride does reward a pickup with better payload capability, but the Navara’s suspension setup wins over this category as it goes through potholes and some uneven terrains in a softer manner. That said, this makes it one of the most comfortable pickups today.

As for the gearbox, the Navara Sport 4x4 can only be paired with a 7-speed automatic, while the Hilux Conquest 4x4 can be optionally mated with a 6-speed manual, however, the engine might have a slight decrease from its torque figures when doing so.

Given its more extensive power figures, plus, the availability of a manual for the top trim, the Hilux Conquest 4x4 wins this round. While the Navara’s power figures are slightly behind, it shall still remain as a trusted and capable choice in the segment given its tried and tested powerplant. As for driver assistance, the Toyota comes with front and back parking sensors paired with a reversing camera while the Navara Sport 4x4 gets a more modern 360-degree camera along with the addition of an auto-dimming rearview mirror.

While the two come with sufficient safety features, the Toyota comes on top of this round given the reinforcement of additional airbags, which then achieves better passenger safety. We're still going to have to give credits to Nissan for installing the Navara Sport 4x4 with such nifty features like the 360-degree camera and an auto-dimming rearview mirror. After a thorough assessment between two of the most renowned nameplates in the midsize pickup segment, we've come to the conclusion that the Toyota Hilux wins this battle. To further elaborate, not only does the Hilux carry a more imposing look, but it also has a more powerful engine along with some extra features that the driver and passenger will surely love. While it may come at an extra cost, which specifically retails at P1,830,000, all the following does justify its price quite well, making it worthy of your consideration.

When it comes to comfort, the Nissan Navara Sport 4x4 really does not disappoint, and that should perhaps continue to attract many buyers. At only P1,635,00, the Nissan Navara 2.5 VL Sport Edition AT 4X4 already gives you the much-needed and wanted features, along with a tried and tested powerplant, and most importantly, that smooth and comfortable ride.