Honda’s staple in its stable is getting a hatch alternative, and we can’t wait to see it. We’re so excited that we’re creating the spec sheets in our heads already. The launch is happening on April 20, 2021, and the City hatchback will serve as the replacement to the venerable Jazz.

With the sedan out in the wild, we believe that it is an opportunity for Honda to make the hatch better or as good as the City RS sedan. Because of that, here are our speculations mixed with a few expectations and wishes that the City hatchback should come with features-wise. So there are a few things that will remain the same. From a logistical standpoint, and to keep the price as competitive as possible, it is highly likely that Honda will still bring in the DOHC 1.5-liter naturally aspirated 4-cylinder motor to the country. The motor will produce 119 hp and 145 Nm of torque mated to a continuously variable transmission (CVT) with 7 simulated gears for the top-of-the-line model. If Honda were to mimic the City’s sedan variants, the other models in the lineup like the V and S trim levels will not come with paddles. We can also expect an RS variant in the lineup. Because the teaser photos showed the rear of the car with its wheels exposed, the design looks similar to the City sedan’s top-of-the-line trim, it leads us to believe that Honda will field a top-spec RS trim for the hatchback the big giveaway being the wheel design and colors. Other than that, we think that the City will come with air-conditioning vents for rear passengers as well as a center armrest that will add to the rear passenger comfort. Also, the tech features of the hatch should be the same as the sedan. It will have a reverse camera and an 8-inch infotainment system.

However, we could see a slightly tweaked interior upholstery to give it a little more differentiation from the City sedan, but we won’t be surprised if the unit we get sports the same seats as the top-of-the-line sedan. Still, we’re not expecting a leather seating option, as it won’t match with the top-trim RS motif that Honda does so right.

What we want or wish for—but sadly might not come 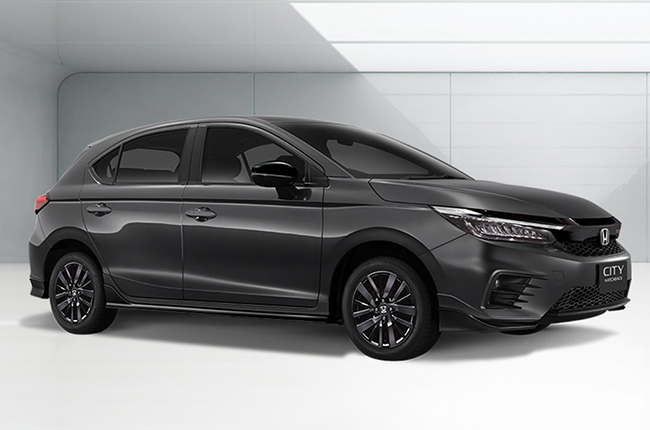 There were a few gripes that we had with the City RS sedan when it first came out, namely, it did not have a blindspot camera. What better way to trump the rest of the subcompact competition than to give it an extra camera in addition to the backup camera provided on the top trims. The mature looks of the City match up to this extra driver aid and will pair nicely with the slightly bigger 8-inch infotainment system currently found in the City sedan.

Also, we hope that Honda will throw us a bone and release the 1.0-liter turbo motor here in the country. Turbochargers are cool, there is no doubt about that. It makes for a more exciting drive. However, we think that the cost will be too high for a lot of people to afford.

Another wish is that the City hatch will come standard with Honda’s famous magic seats that were found in the, now discontinued, Honda Jazz. We hope and pray that this feature comes as it allows for a flat-loading cargo area and extra flexibility when it comes to maximizing your vertical loading space. It was a hallmark feature of the Jazz, and we wish that it would be standard with the City hatchback.