Given the traffic situation in the city, many drivers can get quite frustrated as their time is sapped and their fuel is drained slowly. With that said, you’ll be needing a car that possesses creature comforts and performance that can get you around town, and also the fuel efficiency to match. Aside from its compact dimensions, the majority of sedans in the market return good fuel-economy figures, be it pint-sized, subcompact, compact, or even in midsize form, therefore, making it an ideal car in the city.

Related: Sedans in the Philippines you can buy under P1-million

Now, what we have below is a list of the most fuel-efficient sedans we’ve tested. Each one has registered good numbers during clear and heavy city traffic. Perhaps, you’d want to consider any of the following cars listed below. First on the list is the Honda City which is powered by a 1.5-liter gasoline engine that churns out 119 hp and 145 Nm of torque, buyers can either opt for between a Continuously Variable Transmission (CVT) or a 6-speed manual that's exclusive on the base S. Having tested the Honda City RS registered 8.5 km/L even during Metro Manila traffic which is actually good, perhaps, you can even stretch those numbers a little bit more once the City traffic lightens up. 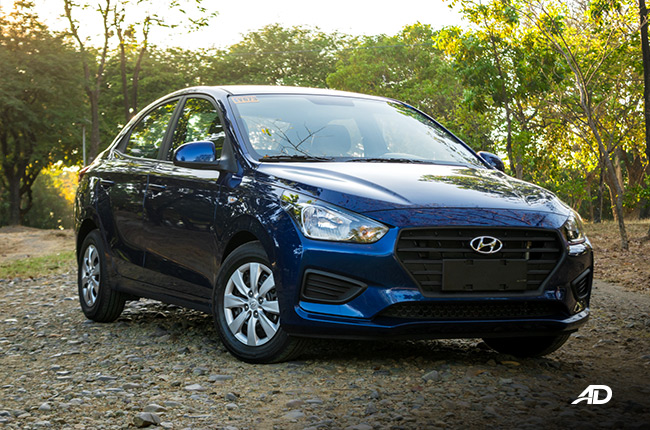 The Hyundai Reina is currently the smallest sedan being offered by the South Korean automaker in the Philippine market. There’s only one engine option available for the pint-sized sedan, and that’s a 1.4-liter gasoline motor that produces 94 hp and 132 Nm of torque. Transmission options include a 5-speed manual transmission or a 4-speed automatic. After thoroughly testing the manual variant, we’re happy to report that small wonder is mighty efficient. During heavy city traffic, the Reina 1.4 GL MT returned 10.8 km/L while faster drives at around 60 km/h read 14.3 km/L. The Mazda3 doesn’t only give you that drool-worthy aesthetics and a premium cabin, rather its engaging driving dynamics also rewards you with great fuel efficiency. The sedan version can be had in either a 1.5-liter or a 2.0-liter SkyActiv-G engine and it can only be shifted with Mazda’s 6-speed automatic transmission. We were able to test both variants, however, the 1.5 SkyActiv Elite AT does feel more at home in the city, with it delivering 8.6 km/L while crawling speeds of around 10 to 15 km/h during heavy city traffic which is pretty good. Fuel economy figures once the traffic clears up a bit. The Mazda6 is perhaps the only midsize sedan in the economy car market that’s currently offering a diesel option. While the 6 is also available with a 2.5-liter SkyActiv-G turbo engine, the 2.2-liter SkyActiv-D diesel is more economical. The diesel engine produces a healthy 190 hp and 450 Nm of torque and is also paired with Mazda’s 6-Speed SkyActiv-Drive Automatic, this combination allowed the midsize sedan to achieve 8.6 km/L while crawling at around 10-15 km/h during heavy city traffic. On a Sunday drive, with an average speed of 60 km/h, the car then registered a whopping 17.5 km/L which is impressive. Hailed as the longest in its class plus, it’s also big on features. The MG 5 can only be had in a 1.5-liter gasoline engine that produces 112 hp and 150 Nm of torque, you can either pair the motor with a Continuously Variable Transmission (CVT) or a 5-Speed manual that’s only applicable on the Core variant. Testing the MG 5 1.5 Style CVT gave us good numbers even during heavy traffic which registered 7 km/L crawling about 20 km/h on EDSA in rush-hour traffic, numbers should go up to 8 km/L once the traffic gets lighter. It is by far one of the most affordable fastbacks in the market today. For the MG 6, buyers have the choice of two variants, there’s an Alpha AT and a Trophy AT, both are run by the same 1.5-liter turbocharged gasoline engine mated to a 7-Speed Dual-Clutch Transmission (DCT). This combo produces a healthy 164 hp and 250 Nm of torque, plus, the MG 6 can do 10 to 11 km/L when going through light traffic. The Suzuki Dzire is a small wonder that offers the right amount of amenities, practicality, and performance in a tiny package. All variants of the pint-sized sedan are powered by a 1.2-liter engine that could either be paired with a 5-speed manual or a 5-Speed Auto Gear Shift Transmission. Testing the automatic variant netted us with impressive figures. In city crawls during rush hour we got 11.2 km/L, while faster paced driving at around 60 km/h registered 16.1 km/L. In the Philippine market, only the Toyota Corolla Altis is currently offering a Hybrid variant. Only the V variant can be had with a 1.8-liter hybrid powertrain producing 121 hp and 142 Nm torque. The said engine and the 1.6-liter gasoline motor could either be mated to a Continuously Variable Transmission (CVT) while the 6-speed manual is only exclusive on the E and G variants. As expected, the 1.8 V Hybrid CVT delivered outstanding numbers, Spending an hour on northbound EDSA returned 14.2 km/L, while a Sunday drive clocked in 26.2 km/L on an average speed of 60 km/h in the Altis Hybrid. 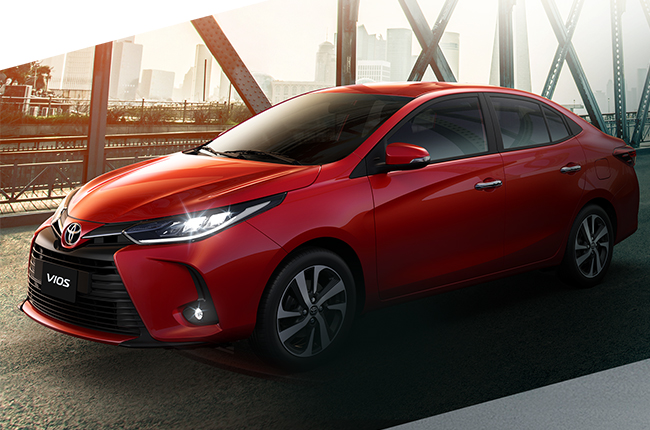 A certified Pinoy favorite, the Toyota Vios has received much love from many owners in the country given its strong reputation for reliability. It’s a suitable city car for many reasons, and one of them is because of its fuel efficiency. In heavy city traffic, both the 1.5- and 1.3-liter gasoline engine still managed to come up with 8 km/L. Staying at a constant 60km/h allowed the 1.3-liter unit to deliver 13.5km/L. 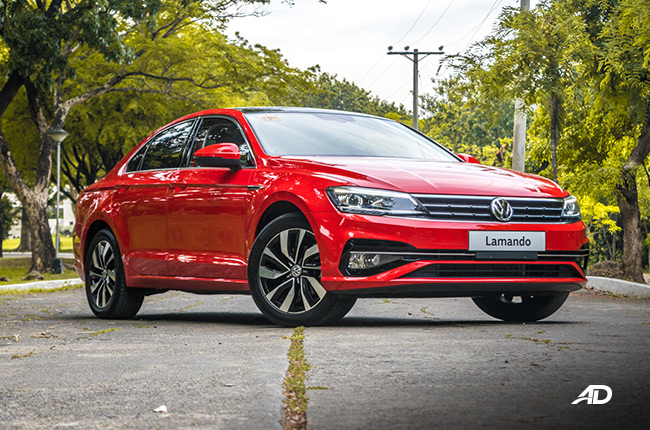 The Volkswagen Lamando happens to be one of the larger offerings in the German automaker’s Philippine lineup. Two variants are currently available for the compact sedan, while both come with the same fusion of a 1.4-Liter turbocharged gasoline engine paired with a 7-speed DSG transmission. Having tested the SEL variant gave us 7.4 km/L during traffic crawls, while figures raised to 12.8 km/L during faster paces at around 60 km/h. Another Volkswagen has joined the list, and it’s the Lavida. All trims are motivated by a small yet potent 1.4-liter gasoline turbocharged engine that produces 128 hp and 225 Nm of torque. The Volkswagen Lavida is available in three variants and its motor can only be paired with a 7-speed dual-clutch automatic transmission. This combination gives the car respectable fuel economy, with it registering 10 km/L while on a city cruise. 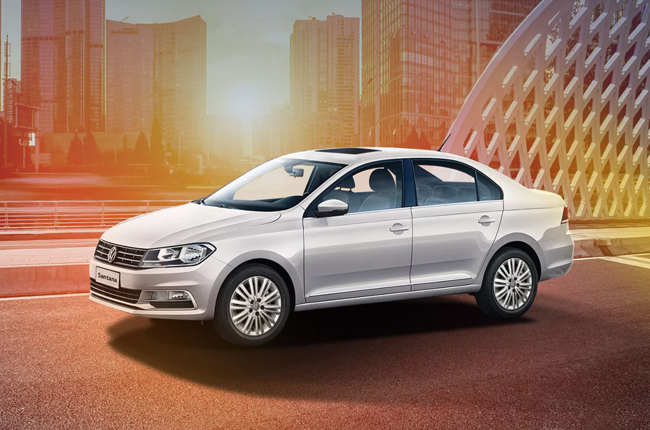 Lastly, is the smallest of the German bunch, the Volkswagen Santana. The subcompact sedan has been recently updated, receiving new wheels and additional convenience features. Only the entry-level variant comes with a 1.4-liter gasoline engine paired with a 5-speed manual, while the rest of the range gets a 1.5-liter gasoline motor mated to a 6-speed automatic transmission. Testing the larger engine mated to the automatic gearbox delivered 8.8 km/L during heavy rush hour traffic, while a Sunday stroll at around 60 km/h, we recorded 14.2 km/L.

Want to buy any of these cars without leaving the comfort of your home? Try our 'Buy Online' feature and just fill up the necessary details for your online transaction.