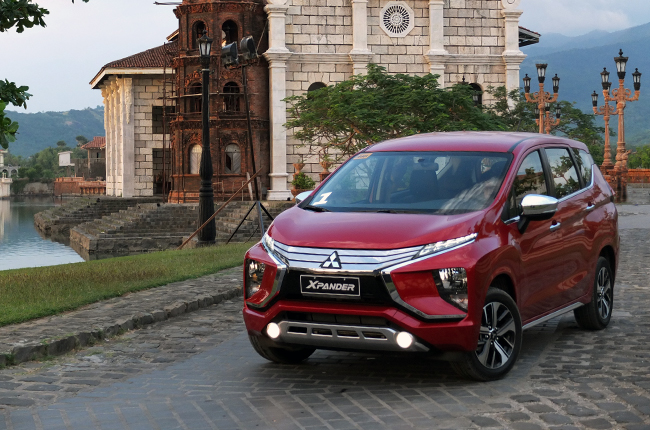 We know all about the Mitsubishi Xpander. We’ve observed its growth, from the time of its birth (well, when it was announced), to the time that it said hello to the Philippines, and now that it’s one of the 10 popular cars on AutoDeal. It is undoubtedly in the list of hottest cars in the Philippines since its launch early this year, and with our review of this seven-seater MPV, the Mitsubishi Xpander remains to be one that is worth waiting for in 2019.

So, basically, the familiarity with the brand and, especially, the car proved helpful during our long drive with the Mistubishi Xpander to Las Casas Filipinas de Acuzar. Also, due to the previous times spent in driving the top-of-the-line GLS Sport trim, the road trip down to Subic and Bataan was not entirely spent gauging what the car could do in terms of power, safety and ride quality. Instead, we asked if the Mitsubishi Xpander has what it takes to be (one of) the best cars for long drives in the Philippines? We understand that in choosing the perfect car for long drives, we’d need to identify the key things to consider when taking those road trips. Read up, and check if the Mitsubishi Xpander fits the bill.

How many people and stuff can you fit? The drive to the heritage houses in Las Casas Filipinas de Acuzar in Bagac, Bataan would mean over three hours of sitting inside the Xpander cabin. Yes, it sits seven people quite comfortably, but long drives would often relate to overnighters, at the least, as well. Pretty sure, like us, you’d be having stuff to keep in the trunk. If that’s the case then taking up the two extra seats at the third row must not be an option. Instead, we suggest that maximizing the trunk space of the Xpander is perfect for it is one of the family cars in the Philippines that has the biggest trunks. In fact, it is the only vehicle in its class with a completely flat vehicle floor, and it offers up a total capacity of 1,632 liters of space when the second and third rows are folded. As for your phones, wallets, drinks and food, the Xpander has an interior filled with storage options like plenty of cupholders and compartments to use.

When going for long drives, we definitely want to take the most fuel-efficient cars ever. Would the Xpander be one? Well, not too long ago, Mitsubishi Motors Philippines Corporation (MMPC) took the test on how fuel efficient is the all-new Xpander. The results showed that the Xpander GLX MT recorded 21.01 km/L while its GLS AT variant tallied 22.94 km/L while the closest competitor clocked in 19.8 km/L as the least fuel efficient vehicle in the group measured 17.4 km/L. During our drive, we’ve also noticed that the Xpander is good for fuel economy. While we took off from DCT Balintawak with (about) 90% fueled, we arrived at the Petron Lakeshore, near the Angeles City exit, with more than ¾ full of gas, and to Subic and Bataan with almost still half-full. Just so you remember, this trim is powered by a 1.5L gasoline engine that generates 105 hp and 141 Nm of torque, and, being the GLS Sport, is mated to a four-speed automatic transmission. Whether it’s for a road trip or city drive, the safety of the driver and passengers are non-negotiables. Driving the Xpander, I’d say that the safety features are pretty per the standards. It has two airbags, ABS with electronic brakeforce distribution (EBD), hill start assist, traction control, and active stability control. It has seat belts for everyone, and also has various ISOFIX mounting points allow easy installation of car seats. And though we really did not test the Xpander for anything extreme, I’d say that having those safety features present in the car is more than enough to know and rely upon. Also worth noting is that as a passenger, the body roll of the Xpander in hilly roads did not cause any motion sickness, and as a matter of experience, you could even work on your laptop as the car drives through the hilly roads.

It’s a long drive and, if you don’t want to hear the snore of the one next to you or if you’re bored of the scenic landscape of the SCTEX road, then driving a car with best infotainment features during the road trip is detrimental. Thankfully, the Xpander has a seven-inch capacitive touchscreen is a decent head unit, and it even features navigation and the usual Bluetooth, aux inputs, and phone mirroring. The reverse camera also feeds its video through the infotainment system. Pairing is easy and the sound is played through a six-speaker sound system. Is the Mitsubishi Xpander a contender to the best cars for long drives In the Philippines category? Apparently, it ticks all the boxes we have to consider, so a big yes is palpable. Though just a silent wish from a vain driver – could there be vanity mirror on the driver’s side and not-so-super light steering wheel? Those are personal wishes, but we’re sure the future Xpander units in the country could have it. For there would be countless lady drivers looking for vanity mirrors throughout the drive, the long drive.