Out with old, in with the new. That’s just how automotive trend works, and this applies even to volume sellers that have been enjoying glorious sales numbers for years. Case in point: Ford’s subcompact crossover and fire-starter, the EcoSport.

While mid-cycle facelifts are usually just a few nips and tucks in the car’s exterior and interior design, the 2019 EcoSport begged to differ. Instead, the Blue Oval chose to give it a total overhaul, complete with a new award-winning 1.0-liter EcoBoost engine for the range-topping trim, while replacing the problematic PowerShift transmission with a conventional torque converter gearbox. But really, how does the 2019 EcoSport drive when compared to its predecessor? Ford Philippines handed over the keys of the old and new model for us to find out. Even better, two of our main car reviewers (myself included) took turns with each car for a deeper contrast of the new EcoSport’s driving dynamics. 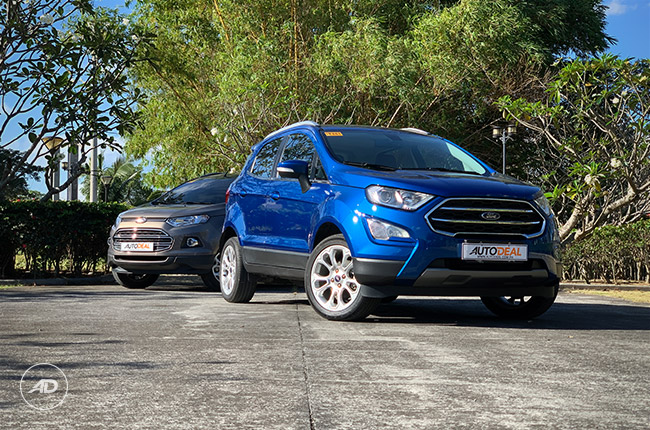 Jacob Oliva: I won’t lie – the old engine and transmission combo left a lot to be desired. The hesitation to move from a standstill and the way it coped with indecision were bothersome, especially during city drives. The 2019 EcoSport’s new forced induction engine was a breath of fresh air in my books. While turbo lag can be an issue sometimes, low-end torque can be felt as early as the turbo kicks in at 1,500 RPM, eradicating the primary problem with the old setup: getting up to speed. Choosing the good ol’ conventional automatic transmission is definitely a good move, as the previous DCT was made for ideal driving conditions. And the EcoSport isn’t that car – it’s an econo crossover that’s meant to conquer the urban jungle.

Nico Ylanan: I spent a few days with the pre-facelift Ford EcoSport a number of times, once late last year, and again recently for this article. While the numbers and features from the older EcoSport’s 1.5L powertrain look good on paper, a solid 110 hp and 142 Nm of torque and a six-speed PowerShift dual-clutch automatic transmission, the reality is that it felt indecisive. Surging and delays after gear selection were the norm and can lead to weird driving dynamics in the city and slow traffic. The new EcoSport, however, was graced by a standard torque converter automatic that works very well with the 1.0L turbocharged engine, making it a peppy and fun to drive subcompact crossover; good enough to redeem its previous image. Jacob: With its diminutive size, the EcoSport was expected to be light and nimble when driven around the city. But Ford somehow overdid that with the previous model, as the steering felt lifeless and too assisted. The new EcoSport’s steering gets better weight (and nicer leather wrap), which allows more control in fast and tight maneuvers. Even better, highway drives are more composed with the 2019 model.

Nico: EcoSports are in no way meant to be sporty or agile, but the small dimensions and short wheelbase make it somewhat nimble, especially in urban environments. The previous EcoSport did feel a bit vague at speed, the steering wheel having too much play for my liking. The 2019 model retains the agility of previous iterations, and they’ve even tightened up the feeling of the steering, making it feel more stable and composed. There’s even more feel in the wheel as it goes over less-than-desirable road surfaces. 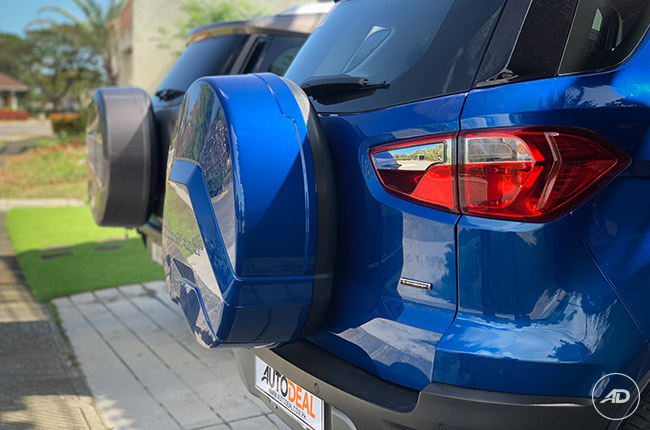 Jacob: The new drivetrain setup didn’t only benefit the 2019 EcoSport’s driving dynamics, it also refined the car’s overall ride comfort. The vibration from the transmission is all gone now, while the almost-imperceptible upshifts and downshifts are something that your passengers would appreciate. Add that to the fact that the new EcoSport gets updated noise-deadening materials in the cabin and you have a city cruiser that’s comfortable enough to drive during long road trips. The suspension, on the other hand, remains borderline-firm, but it’s enough for a satisfactory plight on unforgiving roads.

Nico: There’s a certain firmness to the suspension of the EcoSport, and this translates to minimal body roll at the sacrifice of absorption of bumps and potholes. Both the previous and the new EcoSport have similar driving comfort, with the newer one edging out by providing just a little bit more plushness during harsher or bumpier roads. While there was nothing wrong with the ride comfort, to begin with, as I do prefer a firmer ride, it’s nice that the 2019 Ford EcoSport has more flexibility. Also, the older EcoSport did suffer from some issues during low-speed acceleration, something totally gone in the new one.