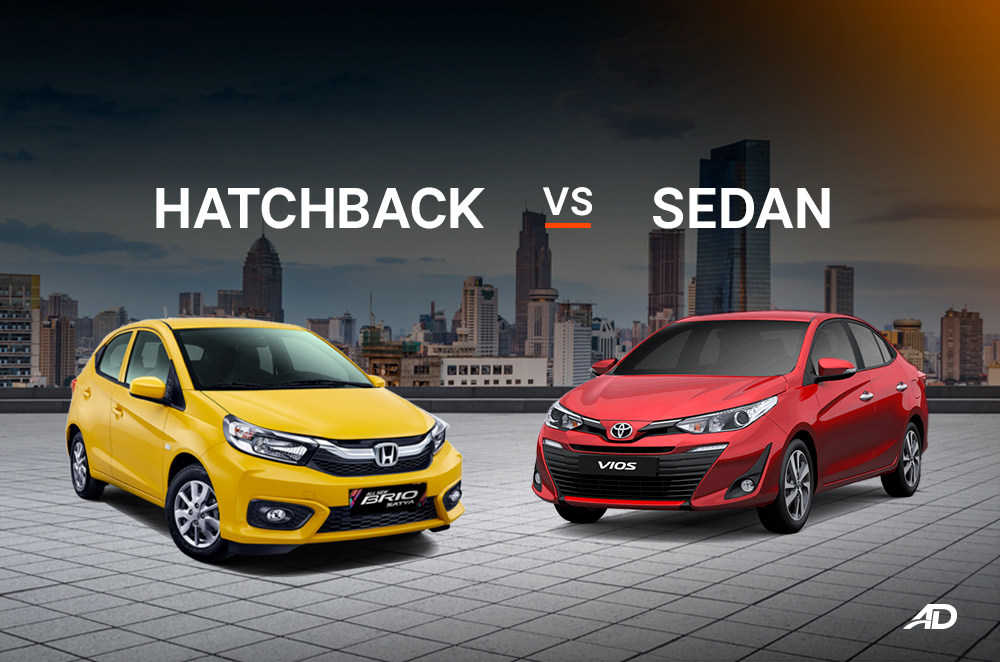 When shopping for a new car, one of the main considerations that you will undoubtedly have to make is with regards to its body style, and when you are looking for something on the smaller side, you usually get a classic dilemma between a sedan and a hatchback. Once you’ve zoned in on a model that happens to have two body styles on offer, it’s a real dilemma. Do you go with the hatch or the sedan?

Now, we cannot deny that there are obvious benefits to both and that the choice – ultimately – is subjective and will depend on your preferences and use case. Some people like the extra cargo of a hatch, while others like the extended length of a sedan. There are certain regions, such as the Philippines, where sedans are more popular and hatchbacks tend to fade into the background as the “alternative” choice. In other parts of the world, you may see more hatchbacks. This would also depend on the model and how good it looks in either form, however, let’s go over some of the pros and cons of both sedans versus hatchbacks. This area is hugely subjective since some cars simply look better as a hatch or as a sedan. There are also some models in the market that look good regardless. Take the Mazda3 for example, either body style suits the car, and apart from a few quirks about the design, the ‘3’ still evokes that sense of elegance and sharpness.

Though, let’s have another example. Here is the Toyota Vios and the Toyota Yaris. Both essentially have the same front end, however, the Vios is the more popular of the two. You’d be hard-pressed to find a Yaris out on Philippine roads nowadays, possibly because it is a look that we are not used to. The Vios is such a common sight on the road that seeing a hatch version of it is a bit uncanny even if they have the same face. Again, this is a matter of preference and someone might prefer the look of a hatch or the look of a sedan.

Though if you are comparing two models that are not related, then that’s a harder comparison to draw, mainly because it depends on the overall design of the car and if it sings to you. 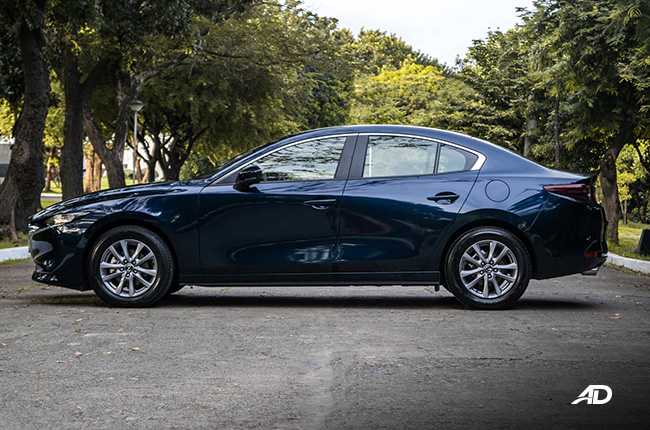 At least in the Philippines, hatchbacks are generally more expensive than sedans. The reason could be chalked up to the extra metal and the interior trims that need to be installed so the chassis can still retain its rigidity, but hatchbacks are overall shorter than sedans. There is more open-air in a hatchback’s interior, which makes it tougher to keep stiff, and it could also have something to do with the place of manufacture. Take our examples earlier, the Toyota Vios and Yaris. Both of the subcompacts may share a platform, but the Vios is substantially more affordable than the Yaris – with more variants as well because it is made in the Philippines, though that doesn’t apply for all vehicles offered as both sedans and hatchbacks.

However, between body types, don’t expect a big difference between the two types. If we consider the Mazda3s once again, the Mazda3 Sportback only costs about P15,000 more than the sedan at the Premium trim level. That’s minimal and is essentially the same price once you factor in your financing. The amount is a bit trivial between the two models. If you’re not factoring the country of origin, then you don’t have to worry that much about the price. It should generally be the same if not the same, given the same trim level. Now, this is where hatchbacks make their comeback. When it comes to practicality, the hatchback is more versatile. The two-box design essentially allows it to have the storage layout of a crossover or SUV. The extra height is also important when carrying taller items like boxes and even wheelchairs or strollers and you even get a bigger opening for your items to fit. You have more storage space, but with a shorter overall length, not to mention that when you fold the seats, you don’t have to worry about the extra bit of metal between the seats and the start of the trunk. Since the cargo area shares the same air as your climate control, items in the back can remain cool or hot depending on how you want it. It shares the same atmosphere as the driver and passengers so any smells would also reach your noses. 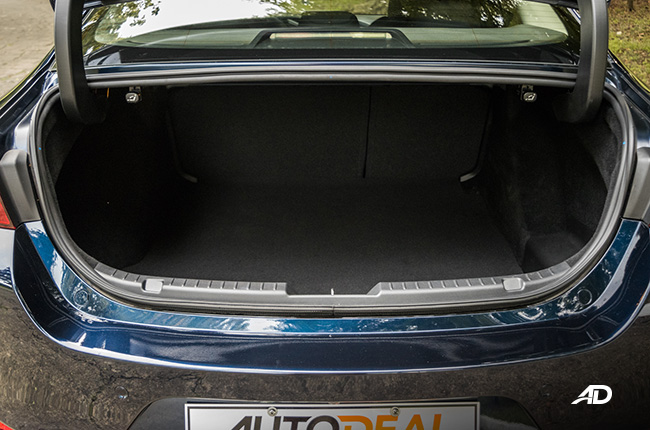 Though there is one tradeoff for this, and that is with floor space. Sedans are generally longer than hatchbacks, and their floor area is, in general, longer than that of a hatchback, so if your items aren’t too tall, or if you don’t usually use vertical space, a sedan can technically store more if you’re not accounting for height as a limiting factor. A con for this, however, is that your cargo will be separate from the cabin, and access to the rear is dependent on if the manufacturer installed a door to access the items in the back. The temperature of the trunk will also be different from your cabin, so if you need to keep something cool, you can’t rely on the climate control to help keep your items from heating up.

You would expect the inside of a hatchback to be a bit more scrunched up since you are dealing with an overall shorter length, though this isn’t true all the time. Some hatches still retain the same rear-seat space as its sedan counterparts. The headroom should be similar, if not better, on a hatchback, though that varies between model to model.

You also have to consider that a city car, like the Suzuki Celerio, will only come in hatch form. This is because hatchbacks are generally more compact than sedans that have the trunk sticking out. It should be noted that hatchbacks and sedans should perform as expected, however, with the shorter overall length, a hatchback, in theory, should handle better, but that’s only in theory. Though, a case for hatchback can be made when talking about performance versions of popular cars. Take, for example, the Honda Civic Type R. Unlike the normal Civic RS, this hot version comes only as a hatchback. There are also some cases where the sedan performs better than a hatchback in terms of fuel economy at least on the highway. This could be due to the more streamlined silhouette of the sedan. The trunk helps it reduce drag ever so slightly, but the fuel economy figures of either body style should be very similar at slower speeds, and any difference can be related to its weight or within a margin of error. 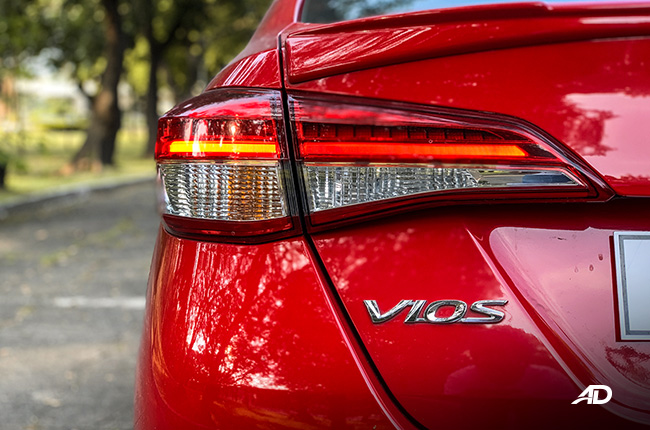 Now, this is a topic we don’t normally touch upon because we run under the assumption that people will be able to buy any car that they want and it will be available, however, and at least in the Philippines, a sedan is easier to come by due to its popularity. You can easily get a Honda Civic sedan, but if you want a hatch, you’d have to spend for the Type R. The Toyota Vios is readily available here, and you are able to get a unit made in the country even, meanwhile, the Yaris will require a waiting period assuming that dealerships don’t have stock because the unit will have to be imported.

In summation, hatchbacks are, in general, more practical and theoretically handle better, however, you have to consider that it is more expensive, and it will cost you a bit more over the price of a sedan, and – at least in the Philippines. For some models, you can even expect more features or even a hot version of a hatch.

Sedans, on the other hand, offer you benefits like its more streamlined profile and aerodynamic qualities – for the most part. You also get more floor space in the trunk and a more affordable price tag if there is a hatch counterpart.

Honestly, it’s really up to you on what route you want to take. Sedans are popular, that much is true, and a bit of a unique choice is a hatchback at least in the Philippines. Perhaps someone who wants a car that rides low, but will need to be more practical can opt for the hatch, but if you want a sedan then go for it. You get more division between your passengers and your cargo, as well as more floor space in general. That and you get slightly better aerodynamics, either way, if the shoe fits, it fits.