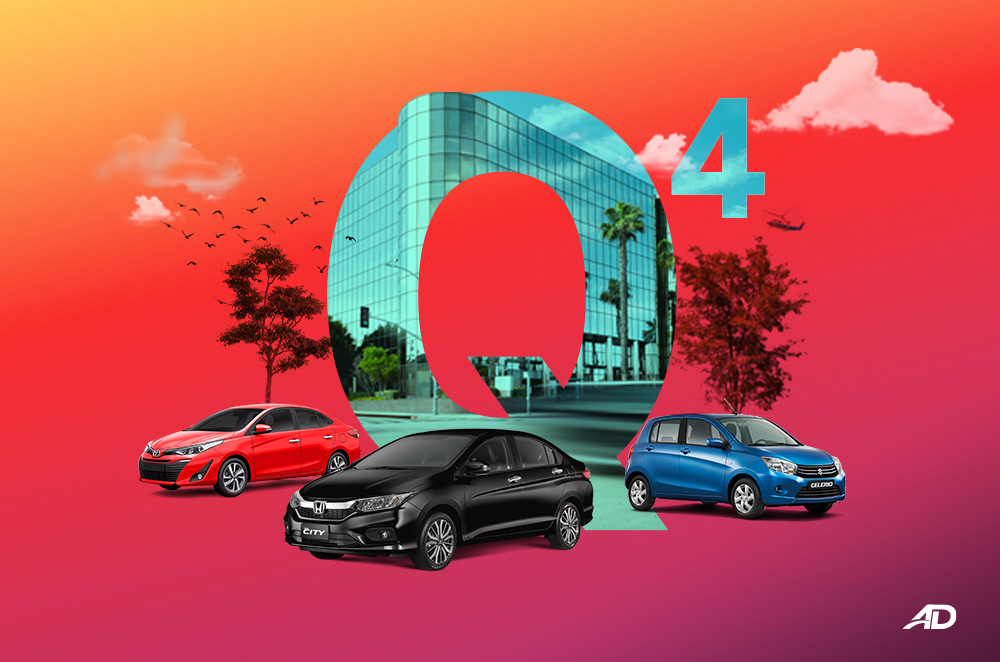 In Q4 of 2019, subcompact cars which include sedans, hatchbacks, and wagons became the second-best-selling kind of automobile sold on AutoDeal.com.ph. It was bested by pickup trucks which has been trading places with the segment since Q1 of 2019. A staple on Philippine roads, the humble subcompact available in a multitude of body styles, and still managed to outsell MPVs and AUVs, a segment that is more capable thanks to more space. Our Industry Insights indicates that there is a pattern to the car-buying behavior of consumers in the Philippines. For consumers shopping for a subcompact car, they often-times find themselves in the middle of a figurative rock and a hard place. Smaller subcompacts populate the lower echelons of price, while pickups and MPVs often cannibalize the higher-end models in the segment’s space. At higher prices, the allure of a subcompact car to a buyer loses its luster, since a lot of the models hit around the P600,000 to P900,000 price range. Nearly 79% of all total sales were made around this price for 2019, making for an average price of P771,795. 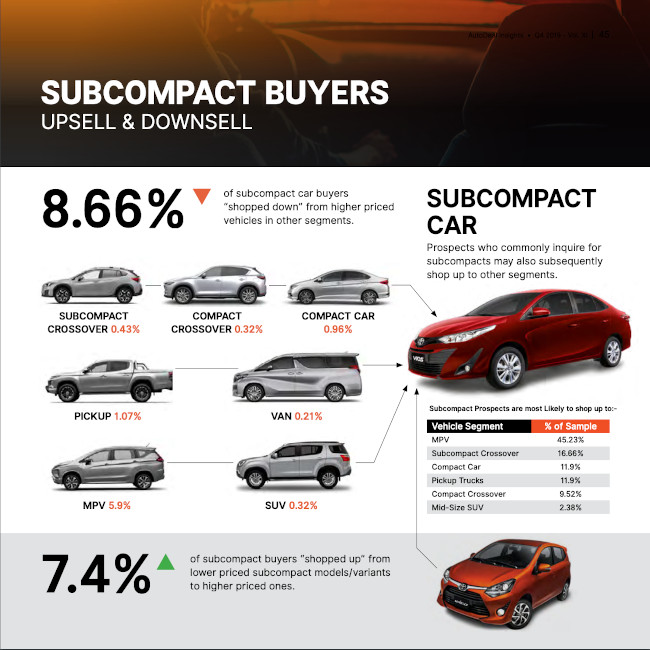 The subcompact car is a middle-ground for many shoppers, but the segment can also act as a springboard to bigger models. Because the price of a subcompact car can break the P1,000,000 mark, consumers looking to buy a car around the seven-digit price range often find themselves spoiled for choice in the Philippine market. Instead of buying a high-end variant, consumers who were once set on a subcompact may go for other body types. A total of 45.23% of all shoppers coming from a subcompact went for an MPV, a segment which is the third-best-selling body style on AutoDeal.com.ph. Subsequently, 16.6% of consumers shopped up to a subcompact crossover, 11.9% to a compact car, 11.9% to pickup trucks, 9.52% to a compact crossover, and 2.38% to a midsize SUV. With more space, these larger cars past, or even below, P1,000,000 offer more utility and value for money for not much more. MPVs are a prime candidate for taking away subcompact car sales due to their space and seating capacity compared to your common subcompact sedan.

In 2019, 8.66% of consumers looking for a larger car, “shopped down” to a subcompact. A speculative guess is that consumers were looking at bigger and more expensive models then were content with the affordability and viability of owning a subcompact car. On the other end of the spectrum, 7.4% of shoppers that were looking at lower-end subcompact cars eventually went up in price to higher-priced models or variants.

Most popular formulas to success 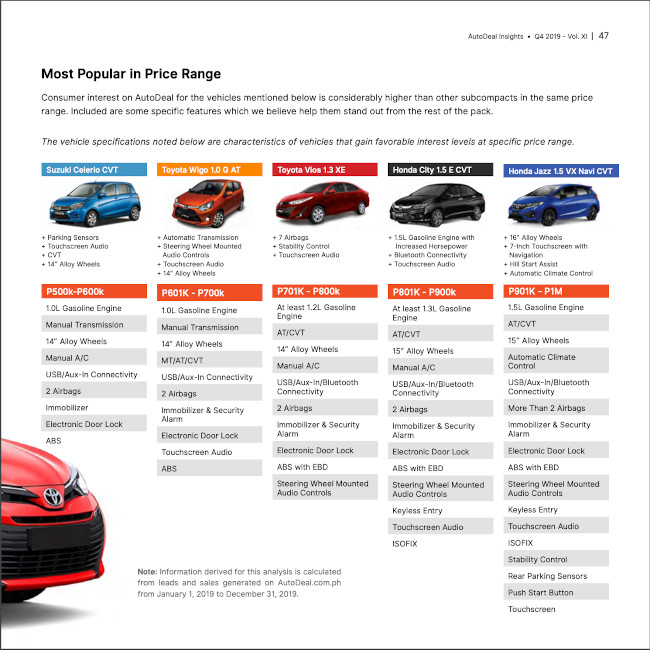 The segment still remains a best-seller, however, meeting the needs of many consumers and having considerable after-sales services to boot. Subcompact cars tend to adhere to a formula, with every price point with an expected set of features. What gets consumers to push through with the deal are features and brand equity, and we see the likes of Suzuki, Toyota, and Honda dominating this space.

At the P500,000 to P600,000 price range, a subcompact car often has a manual transmission, with a best-selling standout like the Suzuki Celerio CVT offering a clutchless drive along with quite a few features for its price bracket. When consumers go up into the P600,001 to P700,000 price point, the brand changes and the best seller for this price range was the Toyota Wigo 1.0 G AT. At under P700,000, it had an automatic transmission along with a touchscreen audio infotainment system among the features. In the middle of the price spectrum, lies the Toyota Vios 1.3 XE, with its standout feature being its 7-airbag system, and CVT. At around P800,001 to P900,000, the Vios loses out to the Honda City 1.5 E CVT. Instead of the sub-1.3-liter engines that pervaded the more affordable brackets, the City has a 1.5-liter i-VTEC engine, which pushes more power and torque than the Vios’ 1.3-liter or even 1.5-liter engines. At this price, the traditional key is expected to be swapped out for a keyless entry system with push-start. At a hair under P1,000,000 or a little bit more, the Honda Jazz 1.5 VX Navi CVT was the best-selling subcompact in the Philippines for its respective price bracket. It has everything from a 1.5-liter gasoline motor, cruise control, more than 2 airbags, touch screen infotainment with navigation, automatic climate control, a CVT, and more safety and tech features. 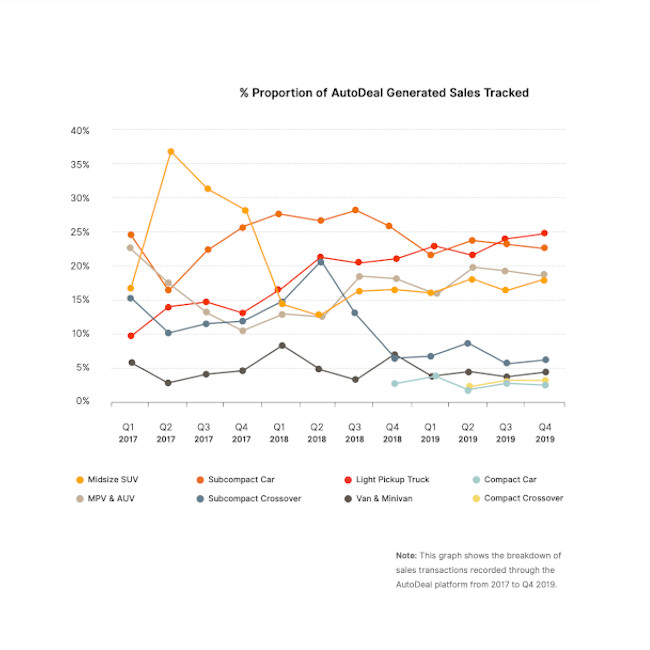 Literally, no, but in terms of sales, perhaps. With historical data pointing towards an average price of P771,795, it doesn’t seem like the average car buyers in the subcompact segment spend the necessary amount of money to buy into an MPV, but high-end consumers of subcompact cars are few. Paired with our “upsell” and “downsell” metrics for the segment, it appears as if most consumers willingly make the jump to a bigger vehicle. Physical and digital marketplaces help with this decision-making, whereas showrooms might even put two models side-by-side, subtly upselling a client. Online marketplaces such as us also display vehicles by price point, allowing consumers to see all their options at their given budget. At a higher price-point, the law of diminishing returns kicks in, and for a larger sum of money, a bigger vehicle will offer more space and utility than a subcompact car.