The Honda brand’s subcompact sedan has been a long-time favorite amongst consumers for its appeal and build quality. Honda Cars Philippines, Inc. also tout it as its best-selling sedan to grace the shores of our humble archipelago. Whether on the highway or the city, the Honda City is a slicker with looks to boot.

The nameplate has been in the country since the early ‘90s and has a strong following thanks to a loyal fanbase. Based on the Honda Jazz, the City enjoys the same engine options and space that the Jazz has plus a trunk. You won’t get magic seats though, but in exchange, you get one of the biggest trunks in the category.

So Which Variant will be best for you? As usual, it is essential to zero-in on what you like, but it is more important to buy what you can afford. In this case, the City is your entry-level sedan in the Honda Philippines lineup, and it deserves some attention. So, let’s run down the lineup to find out which gives the most value. In its basest form, the 1.5 E MT, the sedan comes equipped with a premium item that was not found in the baser models of its predecessors. There once was a time where the entry-level City came with a 1.3L engine, but now there are no compromises in terms of power for the low-end variant. You do get a manual transmission, but this is what the rest of the line up builds upon, an L15 engine capable of 118 hp and 145 Nm of torque. The engine alone is worth the P828,000 price tag considering the power and torque that it outputs compared to its rivals.

This variant receives Bluetooth connectivity options, but without the touch screen. It’s still a two-DIN unit but comes with most of the functionality found in the touch screen counterparts.

Specs in the City 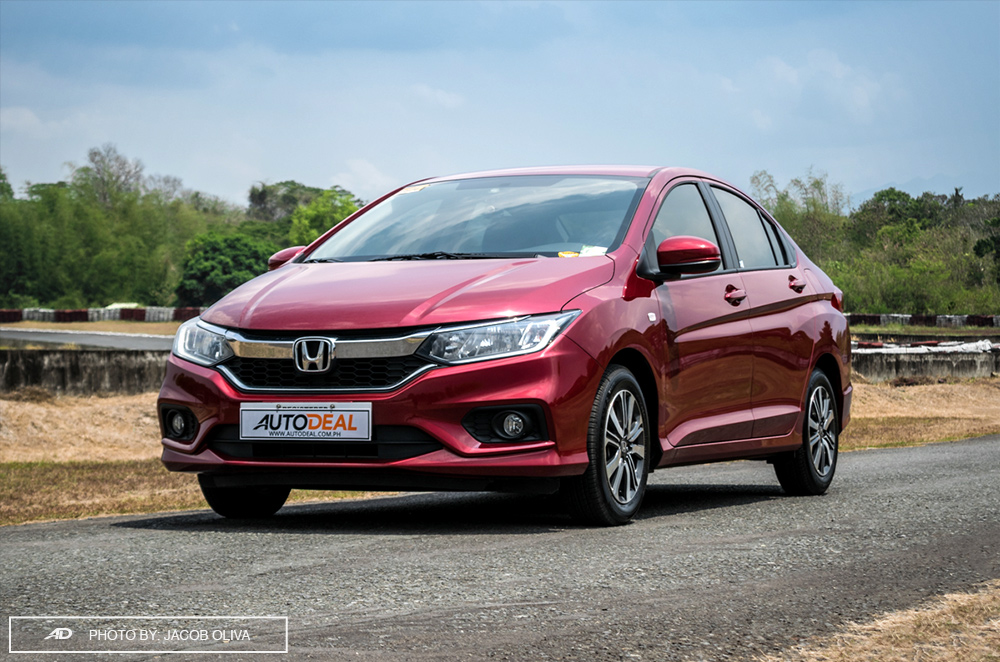 Move up a notch in the lineup, and you’ll get Honda’s Earth Dreams CVT. The 1.5 E CVT is the most affordable variant with an automatic. On the exterior, a set of aluminum alloy wheels in 15-inch size are a nice departure from the steelies-hubcap combo that the lower variant has. A notable improvement that this variant has over the 1.5 MT is the inclusion of a seven-inch touchscreen infotainment system with AUX, USB, and Bluetooth connectivity. You still get the same number of speakers, four, as the manual trim. All of these additions will be a P48,000 premium over the E MT, for a grand total of P876,000. Many are willing to pay the difference for an automatic alone, but the inclusion of steering wheel audio controls, DRLs, aluminum wheels, and a touchscreen infotainment system, only serve to sweeten the deal even more.

City of (your) dreams The VX Navi CVT and VX+ Navi CVT are the two top tier variants in the lineup. The models here are spruced up, dolled up, and gussied up over the more basic E variants. The VX model is the most affordable unit to come with a push-start system with keyless entry. From here on out, the alloy wheels come in a 16-inch size, up from the 15s of the E. You also get a reverse camera and power-folding side mirrors. Perhaps one of the headlining features of this unit is the updated gauge cluster that features a more three-dimensional effect with its tri-cylinder design. Also on the list of add-ons is the paddle shifters that let you lock the CVT into a set ratio. If you opt for the VX Navi CVT, the variant will set you back a total of P985,000

The most expensive and best-equipped City is the VX+ Navi. This variant comes with a lot of goodies that can even put some other models to shame. It comes to you clad in leather, from the seats to the door cards and steering wheel. Also added to the spec sheet of this model are a set of LED headlights and foglights that outputs better than the lower-end halogen set. On top of these additions, you also get two more pairs of airbags, so your side and curtain remain protected in the event of a crash. This variant keeps occupants safe while driving through the use of Honda’s vehicle stability assist (VSA) and keeps the car from rolling backward with hill start assist (HSA).

Perhaps the VX variants make a great case for themselves, but at P109,000 more expensive over the E for the VX Navi, does a shiny new gauge cluster really justify this premium? Or how about the extra P83,000 that you have to shell out over the regular VX variant for the VX+ Navi CVT? It’s a big jump between each variant – this we can’t deny. It’s hard to deny that Honda has done a great job introducing features that matter to consumers at this price point. Considering that the City is a more premium option over others in the market, the brand decided to make the 1.5L standard in the range to place the subcompact ahead of its other rivals in terms of power. Every variant now shares that trait, so from the E to the VX+, a good deal can be had. Let’s crown two winners regardless. The best deal so far for budget-minded consumers is undoubtedly the 1.5 E CVT variant. It's a car with everything you need to survive the city. A decent audio system with a touch screen, a frugal 1.5L engine mated to a CVT, and an overall acceptable feature loadout for an entry-level automatic sedan from Honda. This runner up will serve many well, who are looking for a workhorse without too many adornments to pad the price too high.

The grand champion is a tough pick, thanks to a high price tag. We cannot deny that safety features do mark the price up higher, but adding P192,000 for the VX+ Navi CVT seems a bit steep. Considering that you do get upsized alloys, a better-looking gauge cluster, paddle shifters, a six-speaker audio system, cruise control, LED lighting, and a leather interior may make customers swoon. It’s still a win for the VX trim level but choosing between the plus and non-plus variant is mind-boggling. Our best value is the VX+ Navi variant. We had to zoom out of the Honda lineup for a moment because other competitors are offering top of the line features and prices for more money than this model. Subcompacts are getting more and more expensive, but for a top of the line car, a price tag of less than P1,100,000 is a compelling choice; coupled with the safety features, improved lighting system and OEM leather seats.