The current-generation of the Mitsubishi Strada has been around since 2015 with the pickup truck getting a facelift in 2019. It has been a popular choice for those looking to get their hands on a Japanese pickup at a competitive price with equally competitive features. The Japanese automaker has also added a new trim-level into the mix in the form of the Athlete, which gives the vehicle a sportier appeal. With that in mind here is a quick guide to see which Mitsubishi Strada would suit you the best. 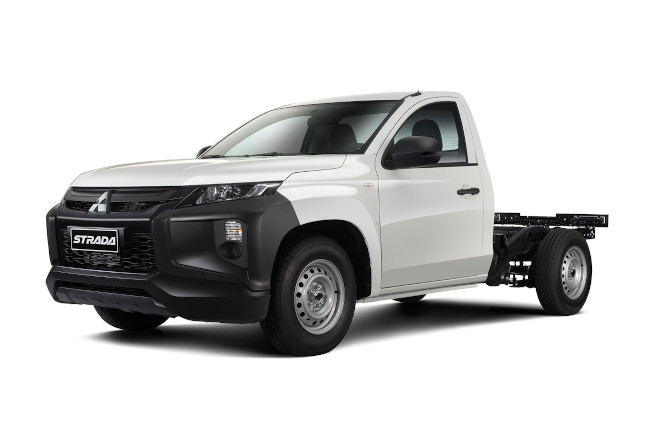 The Mitsubishi Strada Cab and Chassis is the utilitarian variant of the Japanese pickup truck. As the name states it's just cab and chassis which features halogen headlights and a black plastic bumper. It only comes as a manual and utilizes the brand’s older 2.5-liter engine that produces 134hp and 324 Nm of torque. This variant can only be had with a 5-speed manual transmission. Given that this model is for utilitarian purposes don’t expect to see a lot of features inside the cabin. If you want a handy and easily adaptable pickup truck priced at P815,000 for your business needs then the Mitsubishi Strada Cab and Chassis could be for you. 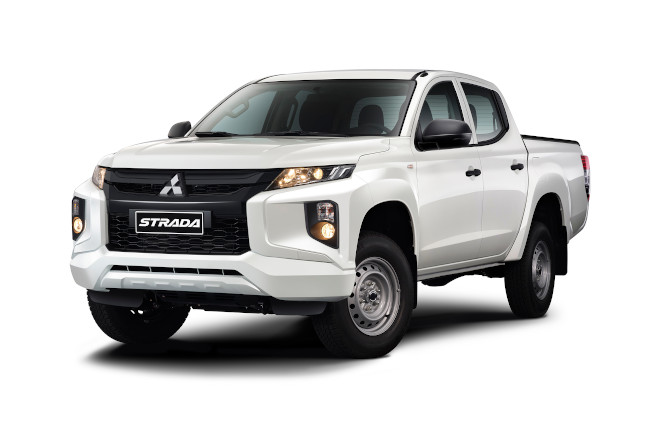 The Mitsubishi Strada GL is the next step up from the Cab and Chassis variant. This model occupies the most affordable and workhorse-level end of the Japanese pickup’s lineup. It also acts as the brand’s replacement to the L200 models. Unlike the Cab and Chassis model, the GL isn’t as stripped of features. It comes at a P998,000 to P1,175,000 price range which gives the vehicle access to the brand’s more modern 2.4-liter MIVEC diesel motor. The diesel-fed engine produces 179hp and 430 Nm of torque and is now the standard power plant for the Strada lineup. The GL Strada can be had with either a 4x2 or 4x4 layout making the pickup truck adaptable to a wide range of needs.

As for its adornments, the GL variant comes with matte black accents instead of chrome. Like it's cab and chassis counterpart it too comes with halogen headlamps. Giving it a utilitarian feel the GL variant also only comes with 16-inch steel wheels instead of the aluminum alloys found in its higher tier variants. In terms of safety, the GL comes with dual front airbags and ABS with EBD.

GLX Plus - adding the X factor 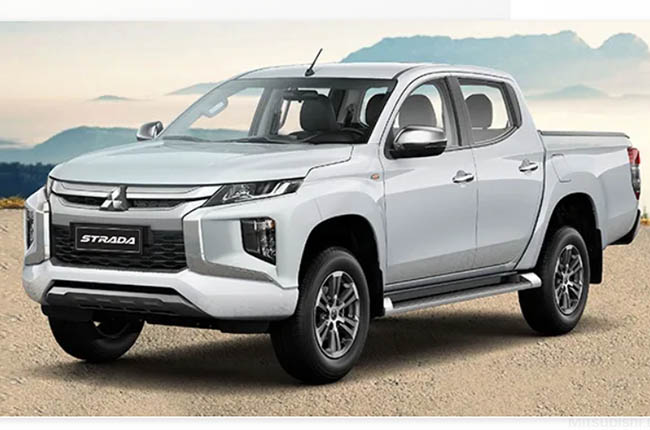 One tier up from the GL is the Mitsubishi Strada GLX Plus. For this variant, more features can be had such as 17-inch two-tone alloy wheels, body-colored accents, as well as a 2DIN infotainment system that comes with a 4-speaker sound system. Like the GL variant, it too comes powered by a 2.4-liter turbo diesel engine that produces P179hp and 430 Nm of torque. The GLX Plus trim-level can only be had with 6-speed manual transmission and is priced at P1,185,000. Safety features are also the same as those found in the GL version of the Japanese pickup truck. 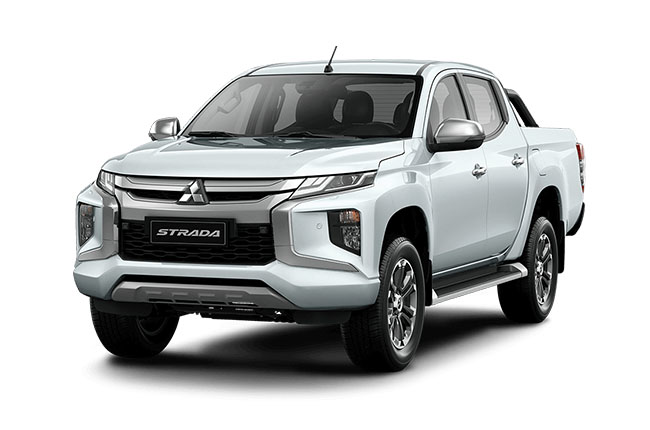 A step up from the GLX plus trim-level is the Mitsubishi Strada GLS. it comes with two configurations as well as two transmission options. It can be had in either a 4x2 or a 4x4 layout and can be had with a 6-speed manual or a 6-speed automatic transmission. As it is the middle variant it comes with bigger 18-inch alloy wheels as well as bigger 17-inch ventilated disc brakes. Like the GLX plus variant before it, it too comes with a 2DIN 8-inch infotainment system. However, unlike its contemporary, it comes navigation ready, with a 6-speaker sound system, as well as a leather-wrapped steering wheel. It also comes with LED projector headlights, LED taillights, and a reverse camera. For safety the Mitsubishi Strada comes with dual front airbags, ABS with EBD, active stability control, traction control, hill start assist, and ISOFIX anchors. The Mitsubishi Strada GT was the former top of the line variant of the Japanese pickup truck. It comes with all the bells and whistles. As such it comes with all the previous equipment from the lower tier variants and then some. It is important to note that even the GT variant does not come with Apple CarPlay or Android Auto. There is, however, a smartphone integrated mirroring application that uses Bluetooth. Offline navigation is also available in the trim-level. In terms of safety the top of the line Strada comes with 7-SRS airbags, and 5 three-point seatbelts with an audible seatbelt reminder for all occupants. It also comes with blind-spot monitors, Mitsubishi Active Stability and Traction Control just to name a few. A new and convenient feature added to the GT variant is an Ultrasonic Misacceleration Mitigation System which stops the car from moving from a standstill if it detects that there is an obstacle in front of it.

It comes powered by the same 2.4-liter turbo diesel engine as the rest of the lineup that produces 179hp and 430 Nm of torque which is mated to a 6-speed manual transmission. The Mitsubishi Strada GT 4x4 AT can be had for P1,710,000. 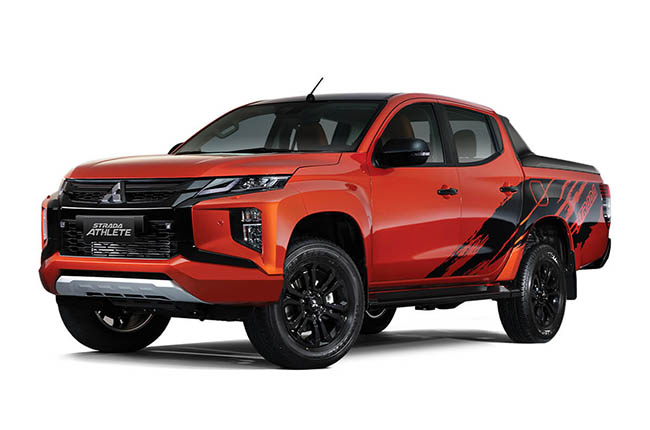 The top of the range model for the Japanese pickup is the Mitsubishi Strada Athlete. This trim-level adds more flair to the GT line and gives it unique accents to the vehicle. The Athlete trim can be had in either a 4x2 or a 4x4 layout both of which are only available with a 6-speed automatic transmission. As it is the new top of the line model it carries with it all the same technology and features that are found in the GT and GLS variants with one important difference for the 4x4 variant. For those interested in taking this pickup truck off-road they will be happy to know that Mitsubishi has added a new four-wheel-drive system to the vehicle.

The Mitsubishi Strada has all bases covered for its lineup, from the utilitarian cab and chassis all the way to the range-topping GT and Athlete variants of the vehicle. With that said, the process of picking which variant gives the right balance between money and features becomes a little harder.

Two variants have made their case starting with the GLS 4x2 AT. This variant offers the right balance between price and functionality as it serves as the baseline for which other features are added onto by the other variants. It comes standard with dual front airbags, ABS with EBD, active stability control, traction control, hill start assist, and ISOFIX anchors, which already presents itself as a value for money option for its price of P1,325,000 as it already comes with LED headlamps as well as LED tail lights which make it look similar to GT variant. For those looking to get an automatic 4x2 version of the Strada look no further than the GLS.

The second noteworthy variant is Athlete 4x4. As the new top of the range model, it comes with all the bells and whistles along with additional styling upgrades that give the pickup truck a unique and athletic look. The addition of the Super Select 4WD-II is also a big plus especially for those looking to bring their pickup truck off-road. It comes with a price tag of P1,760,000 while it may seem expensive for the features that it offers and with its capabilities it more than justifies its price.

If you want to get your hands on a Mitsubishi Strada today then we highly recommend using our Buy Online function as it can make your buying process an easier and smoother one.