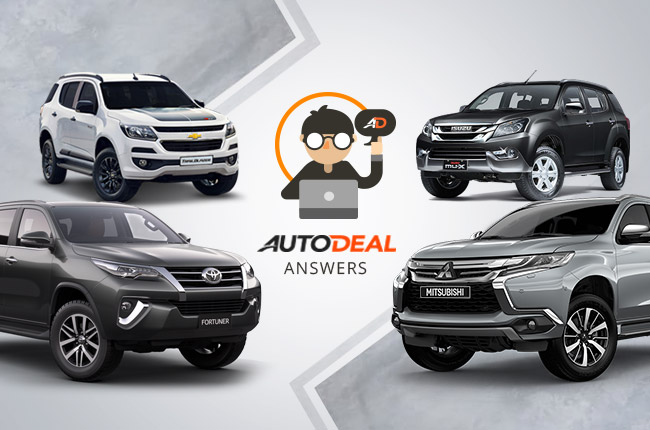 AutoDeal isn’t only a place where you can find promos, check vehicle specs, and compare cars. We also engage with our Facebook followers by answering their questions sent straight to our inbox.

In the previous AutoDeal Answers, we shared our thoughts on which car to choose – the Honda City or the Honda Jazz.

For this article, one of our followers, Reynaldo De Leon, asked our opinion on which SUV should he get – Toyota Fortuner, Isuzu mu-X, Mitsubishi Montero Sport, or Chevrolet Trailblazer. He also added that he would like it to be 4x2 and diesel-fueled, while mated to a manual transmission.

3 Japanese and 1 American – all boasting a bulky, authoritative demeanor, looking like they’re ready to conquer any road. Luckily, all 4 models have the variant that he’s looking for and they are within a relatively close price range (P1,298,000 – P1,395,000). It’s a tough choice, but their designs and other subtle differences separate each SUV from the other.

Our writers are up to the task again, answering questions based on their preferences. Each has their own personality and hobbies - Jacob is a musician, who regularly rocks out at night with his band, while Dan is an artist whose creativity reflects in his poetry and visual arts. Martin, on the other hand, is a bachelor who’s trying to mix YOLOing with adulthood, while Yabee is a tachophile who has a beautiful wife and a cute daughter who adores pink cars. 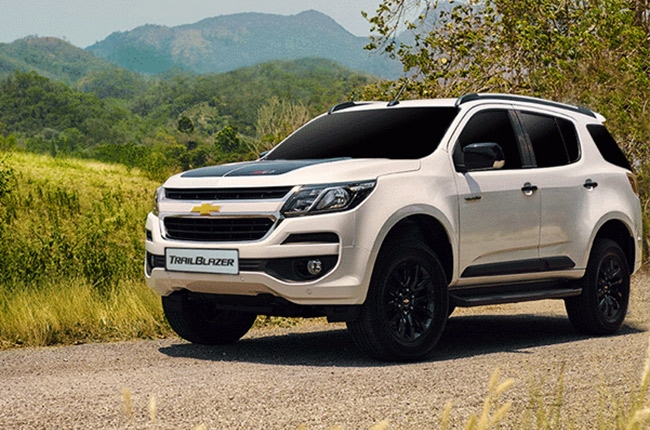 As someone who gets on stage regularly, I prefer a good-looking, standout car. For me, the Mitsubishi Montero Sport fits that category. Why? Its chrome accents in its fascia looks aggressive and fits the car well, matching its overall contour. Plus, the seemingly crying LED taillights look great – something that you won’t see in any other current models these days. Talk about standout.

Moreover, I’ve always been a fan of the Montero Sport ever since its first generation model, so, there’s that.

On 2nd thought, the facelifted Chevrolet Trailblazer also caught my eye. I mean, who wouldn’t? Those decals are something that aren’t usually seen on SUVs, unless you deliberately add them. Nevertheless, the redesigned fascia crowned with the chromed grille looks badass.

I’m not quite a fan of sizey vehicles, for I prefer compact cars for road size flexibility purposes. But if I am to buy an SUV, I would go straight to the Fortuner’s aesthetics.

The sharp and serious headlights are very much ‘in-character’ with my observant personality. Furthermore, I also like how the front fascia spices up the vehicle’s mean-looking stance out on the road – one that could give you an intense “cargasm” at first glance. The cabin’s simplicity, on the other hand, gives me a peaceful impression just by looking at it.

Yet apart from looks, reliability is another story for a practical carbuyer. I don’t have to worry though, Toyota has its reputation in parts and maintenance services. This is a hard question as all SUVs mentioned are good in their respective ways.

If I were to judge based on first impression (exterior design), I would choose the Toyota Fortuner as the winner. I pick Toyota's SUV to be the best looker because I find its exterior to be the sleekest among the bunch.

However, there's this 1 SUV that's consistently trying to persuade me into getting my vote - the Isuzu mu-X.

The mu-X has a tough-looking, macho exterior that would make you feel like an alpha male/female. Aside from its exterior, the mu-X packs a decent power. Its 2.5L diesel engine delivers 134 hp and 320 Nm of torque; mated to a 5-speed manual tranny.

Moreover, the mu-X has relatively the lowest price tag among the said SUVs. The 2.5L LS A 4x2 diesel variant, is priced at P1,298,000. As a bachelor trying to make a living, the mu-X’s price is the haymaker on why I would choose Isuzu’s SUV. Lower price tag, but not compromised in terms of looks and power.

With practicality in mind, the Isuzu mu-X (more specifically the LS A 4x2 MT variant) is my top choice for this one even if it's the elder statesman among the selection.

Aside from its lower SRP, I get to drive home an SUV with a capable 2.5 L diesel engine, leather seats, dual-zone automatic air conditioning, and a 7-inch touchscreen headunit with Bluetooth connectivity. It doesn’t stop there, the rear occupants such as my cute little 2-year old girl will get to watch her favorite shows on the flip-down 10-inch monitor. This will certainly come in handy when we go on long road trips.

There you have it – our writers’ personal choices. But since the answers above are subjective, it really boils down to the preference of the buyer, according to his interests, hobbies, and most especially, his needs.

Do you have questions just like the one above? Don’t hesitate to send us a message on our Facebook page, or email us at feedback@autodeal.com.ph. We’ll be more than happy to answer them for you.