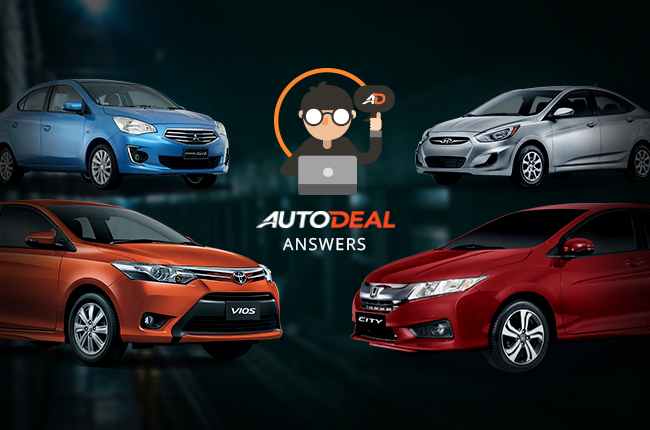 AutoDeal is a website where you can search for car promos, check vehicle specs, and compare cars. Aside from that, we also write about the latest news in the automotive industry as well as engage with our Facebook followers by answering their questions.

Now, one of our followers, Earnest Oliver Lacson, asked our thoughts on which subcompact sedan should he get for ridesharing business like Uber or Grab. He didn’t give his initial choices but he emphasized on the idea of affordability and durability. With a variety of cars to choose from, we narrow down the choices to 4 vehicles - Mitsubishi Mirage G4, Toyota Vios, Hyundai Accent, and Honda City.

Similar to the previous AutoDeal Answers, our writers will be answering the question based on their personal taste or preference. Each has their own personality – Jacob is a musician, who regularly rocks out at night with his band, while Dan is an artist who’s fallen in love with poetry and visual arts. On the other hand, Martin is a bachelor who’s caught in the middle of adulthood and living a YOLO lifestyle. Lastly, Yabee is a family guy who has an adorable wife and a cute daughter. Considering Ernest’s preferences (and mine, of course), I will pick the Honda City as the subcompact sedan I will buy for ridesharing business. It’s not the least expensive among the choices but considering its price, you get so much value from its P804,000 price tag – and I’m talking about the 2-DIN Kenwood Advanced head unit. It's not as flashy as the 7-inch LCD of the Vios but as a musician, sound clarity is important, and the Kenwood sound system definitely has that.

As for fuel economy, the City has the Econ button, which is like driving with your mom – it controls your rev and speed so you won't consume too much fuel.

That's without mentioning that the City is the best looking subcompact sedan among the 4 mentioned. A pretty neat personal car by the time you quit the ridesharing business. The Honda City may be a good looking set of wheels, but if there is a more fuel-efficient sedan among the 4 car options, it would be none other than the Hyundai Accent. With the available diesel-powered variants that range from P748,000 to P848,000, no practical buyer could go wrong with it.

On further note, it isn’t just the fuel efficiency that is included in the car’s value. The simplicity in the smooth design flows from the vehicle’s fascia toward its rear end. The flow of lines adds a distinct rhythm to the overall appearance of the vehicle, not only on the outside, but more so on the inside. As for me, I am a fan of complexity in form of simplicity, and the minimal styling of the Accent’s cabin perfectly fits my preference.

Of note, the Accent has my heart. With the available 1.6L diesel engine under its hood, it truly is a game-changer for both personal and business use. If I were to choose a subcompact sedan that’s going to be used for ridesharing, I’d go with the Mitsubishi Mirage G4. The top variant of the Mirage G4 is priced at P790,000, which is lower when you compare it to mid-level variants of the Vios, City, and Accent.

You may argue that the smaller engine displacement of the G4 is the reason for its lower price tag. Yes, that is a fact. However, ridesharing apps like Uber and Grab often operates within Metro Manila (city driving). With that in mind, the Mirage G4’s 1.2L gasoline engine is more than enough for daily urban drives.

Moreover, in terms of size, the Mirage G4 is the shortest in length and slimmest in width as compared to the Vios, City, and Accent. With this, the Mirage G4 has a more compact body, which would be easier to drive through tight streets. On the other hand, service parts would not be a problem with the G4 because Mitsubishi Motors Philippines Corp. (MMPC) has a facility located in Sta. Rosa, Laguna. MMPC is also set to locally produce the Mirage and the Mirage G4 due to its participation to the CARS program.

With the given choices and thinking solely of business, I would definitely go with the top-of-the-line variant of the Hyundai Accent. Off the bat, it has a 1.6L CRDi diesel engine that produces 136 hp and 300 Nm of torque, mated to a 7-speed dual clutch automatic transmission. In my book, this means having a powerful yet fuel-efficient engine.

While many believe that maintaining diesel engines long term may be a bit pricey, that just doesn’t worry me as Hyundai offers a 5-year unlimited mileage warranty.