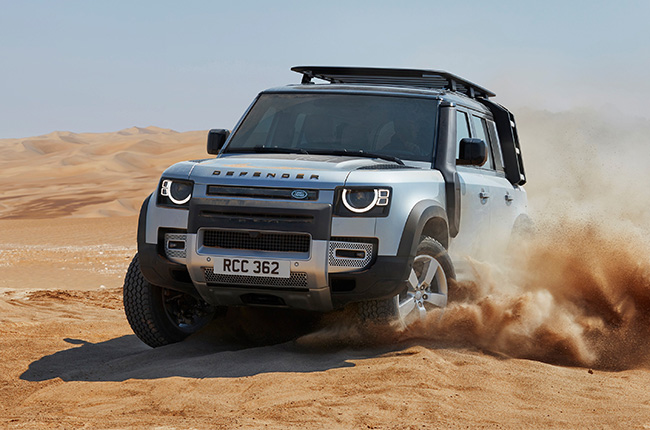 The Land Rover Defender was initially thought to be out of production. The Defender has a long history of being a tough, go-anywhere vehicle, with a reputation that’s so legendary, it has become a go-to vehicle of explorers and adventurers alike. It was even used by several armies around the world – most notably the British Army during World War II.

Land Rover initially wanted to halt the production of the Defender in 2016 due to its aging chassis and its failure to meet European emission standards. The company was also unwilling to upgrade the engine and the vehicle chassis itself. Thankfully, Land Rover changed its mind and decided to revive the iconic SUV. Similar to how it was originally launched, the all-new Defender will come in 90 and 110 variants. This time, however, the numbers don’t represent the wheelbase anymore. The SUV manufacturer also took a radical step forward by ditching the ladder-frame chassis of the previous model.

The 110 offers seating for five, six, or seven or in a 5+2 seating configuration. Those worried about practicality, the space behind the second row equates to about 1,075-liters which will extend to 2,380-liters when the second-row seats are folded. The 90 variants of the Defender will also be able to accommodate six occupants. This small form factor according to Land Rover is able to seat six in a vehicle length of a compact family hatchback. The newest generation of the iconic vehicle now uses D7x architecture. The new technology uses lightweight aluminum monocoque construction. It allows the vehicle to have the stiffest body structure Land Rover has ever produced. The company states that this new architecture makes the chassis three times stiffer than that of the traditional body-on-frame configuration. The new design allows the vehicle to sport air or coil spring suspension and support for the latest electric powertrains.

Trim levels for the new Defender are as follows: S, SE, HSE, First Edition, and the top of the range Defender X. Buyers of the First Edition and Defender X variants will also have the chance to personalize their vehicles thanks to Land Rover’s four accessory packs. These packs are the Explorer, Adventure, Country, and Urban packs. Other notable features that can be purchased for the all-new Defender are a Remote Control Electric Winch to help you get out of sticky situations. Next up is a Rooftop Ten and inflatable waterproof awnings, for those who are adventurous and like to go camping with their vehicle. Finally, there are the options for tow bar systems and roof racks for those who want their vehicle protected on the trail as well as the option for extra carrying capacity.

This new off-roader hasn't lost its edge, however, it still features off-roading features like a twin-speed transmission, locking center differential, active locking rear differential, and terrain response. These features help the new Defender go through almost any terrain. To further help the driver see, the Defender also features Clearsight view and Clearsight ground view. The ground view features an invisible hood function that lets the driver see through the hood of the vehicle. The adventurous will be happy to know that the all-new Defender features an impressive wading depth of 900 mm or around 35 inches. Those with a more utilitarian need will be happy to know that the new Defender comes with a towing capacity of 1984 lbs. 1984 was also coincidentally the year the entire Defender line up was completed with the introduction of the Defender 90. The load-bearing ability doesn't stop there as the vehicle can carry another 661 lbs on the roof.

Power options for the new Defender are plentiful. At launch, the vehicle will come with a four-cylinder and six-cylinder engine, both of which will run on gasoline. Over on the diesel end, two engine options are available. On top of this, Land Rover will also bring in a plug-in hybrid variant powertrain, which will be coming next year.