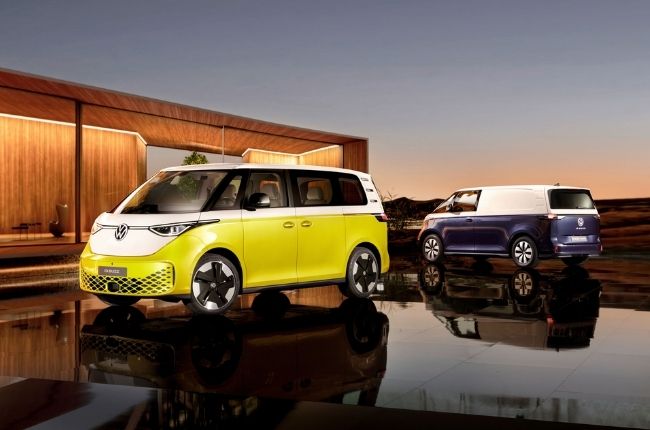 The 2023 Volkswagen ID Buzz has arrived. After five years' worth of teasers, the all-electric reincarnation of the VW Type 2 Microbus is ready for the world to see. In a virtual event on Wednesday, the German automaker gave the world its first look at the production version of its newest electric minivan.

Like the new Kombi, the ID Buzz represents a curious new era for VW. It has seen the company revisit some of its most beloved models while keeping its eye firmly on the future. Surprisingly, VW has not altered much from the ID Buzz concept from 2017. The only visible changes include the significantly more prominent air vents at the front and a boxy and tall form overall.

VW used the same platform as the ID.3 electric hatchback, so it gets a similar 200 hp, 150 kW electric motor sending power to the rear wheels. In Europe, the ID Buzz will get an 81 kWh battery pack with 77 kWh of usable energy. The minivan will receive a software-capped top speed of 145 km/h. VW has not given a range figure, although some estimates say it could be 400 to 500 km in a single charge. Alternating current (AC) charging will use 11 kW of power, while the direct current (DC) charging feature can push it out to as high as 170 kW.

The ID Buzz will reportedly get fast charging capabilities, with 5 to 80 percent charging taking as quick as 30 minutes. It will also have bi-directional charging functionality, meaning it could use the battery pack to dish out power for other electrical devices. Inside, the ID Buzz looks several times more practical than its concept form. The radical retracting steer wheel is gone, replaced by a more conventional flat-bottom design. There's also an option between a 10-inch or 12-inch infotainment system, both of which will have Apple CarPlay and Android Auto available.

The ID Buzz looks spacious inside. The standard trim level will come with five seats, with six-seater and seven-seater options becoming available later. The cargo version will reportedly maximize even more space, giving customers a choice to configure only one front seat and a fixed partition to separate the cargo area.

VW has yet to disclose pricing information for the 2023 ID Buzz. The electric minivan will arrive in Europe later this year. It will debut in the US next year and go on sale there in 2024. It's unlikely the ID Buzz will debut in other markets, but it's not impossible in the future. For now, we still have the Kombi.