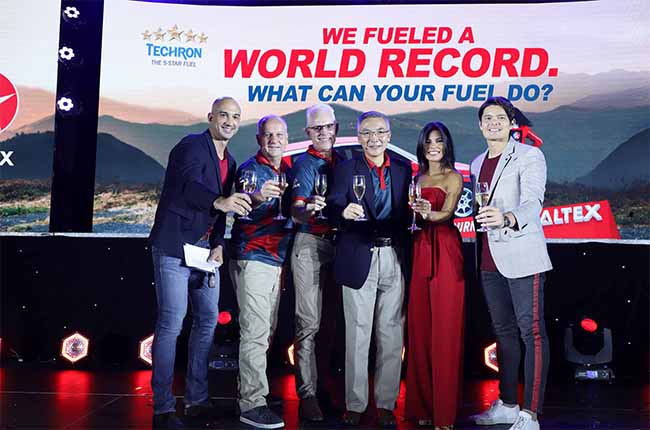 Dantes III, more commonly known as Dingdong Dantes. According to Caltex, he is the embodiment of its tagline and philosophy of "Enjoy the Journey." as well as the brand's other positive traits. Caltex continuously improves its products in preparation of future engine technology and to meet the ever-changing needs of motorists, even partnering up with local manufacturers to better serve the Philippines.

In addition, Caltex recently announced its new campaign, World Record-Breaking Fuel, which is a two-part series on National Geographic's Record Ride to demonstrate how a world-class fuel could power record-breaking feats.This is to show how Caltex with Techron fuels can power an engine towards achieving an extraordinary journey.

Caltex partnered up with Guinness World Records to time a record-setting 6-minutes 52.692 seconds for the fastest ascent of Doi Chang Mountain Road by using a 28-year old Honda Civic. The Doi Chang Mountain is known as the historical capital of the old Lanna Kingdom in Thailand. The car used in the world record was powered by Caltex fuels and had significant modifications done to the suspension, wheels and tires, and various lightweight components.

To perform at maximized power, an engine requires unrestricted air and fuel delivery which cannot happen when deposits are on the intake valves and port fuel injectors. Techron’s unique chemistry is proven to remove and protect an engine from deposits in these critical areas. Caltex wants to encourage drivers to fuel up with the same fuel that was used in the record attempt to experience the same power and efficiency in their everyday drive.