Ford has just unveiled its newest compact pickup truck, the Maverick. Priced at just $20,000 USD, it begs the question, will the truck be a prime candidate for the Philippine market?

So either we get it or we don’t. Either Ford Philippines considers selling it alongside the Ranger and F-150, or press on with its current lineup of trucks. It doesn’t seem like a bad idea, however. The Maverick could work, but it has a reputation to live up to in the Philippines. The Ranger has its already loyal customer base, and the F-150 has a cult following of its own. Could Ford recreate its success with its smallest pickup? We think it may have a place in our market. First thing’s first, however, let’s dissect and inform you on what’s new. 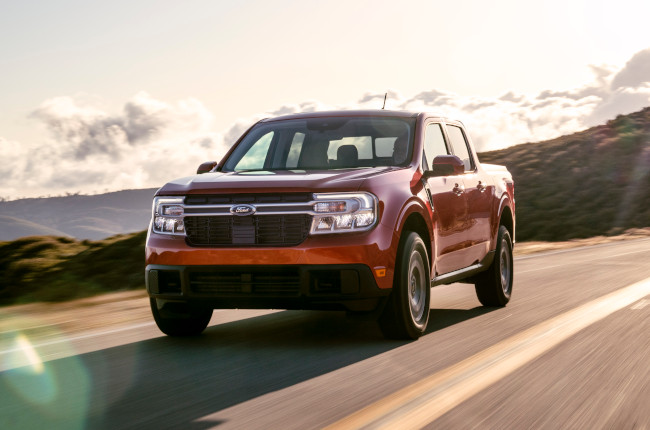 We’re not gonna lie, it’s a stubbier F-150. The boxy lines and large headlights are quickly becoming Ford’s trademark design cue for pickups. We’ve even seen similar execution with several spy shots of the Ranger in other countries. The top-line offering from Ford looks like it has LED headlights with fog lamps and DRLs. The taillights are also LED, and it also gets a nice debossed Maverick logo on the tailgate.

There is also no doubt that the Maverick is compact in size. With a wheelbase of 3,075 mm and a length of 5,072 mm, it’s sizeably shorter than the Ranger—which has a wheelbase and length of 3,220 mm and 5,362 mm respectively. It’s still bigger than a Ford Territory though. More compact is one thing, but how it’s built is another. Instead of the traditional ladder-frame chassis that most pickups use, Ford used a unibody instead. Having a unibody chassis means that the ride of the Maverick is potentially as comfortable as a crossover. On top of that, the Maverick will only be offered as a 4-door 5-seater for now.

That being said, it could potentially work as a less serious pickup truck. More for use in the city, light trails, and gravel roads, the Maverick could work in the Philippines. The bed is also smaller in size but is more innovative than we expected. Ford calls it the FLEXBED, and it features organization and storage solutions to arrange and secure cargo flexibly—as the name implies. Simply put, it’s a forward-thinking cargo management system that helps maximize the smaller dimensions of the unibody pickup. 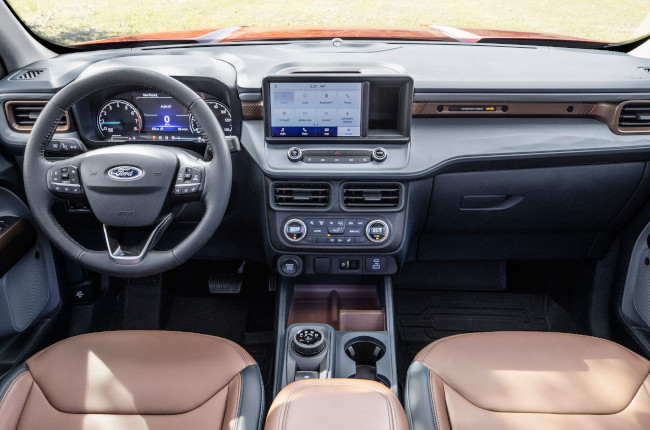 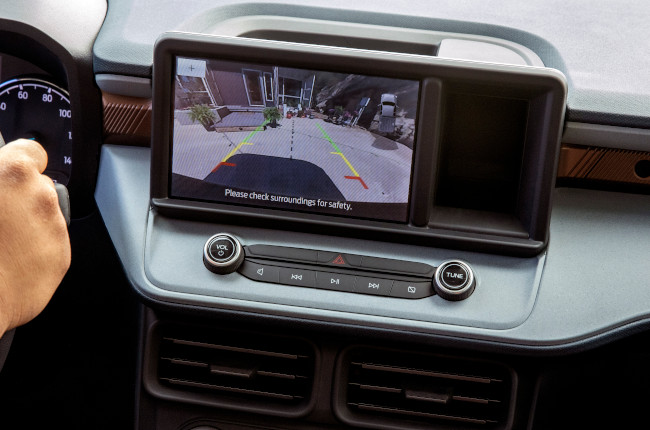 It seems that Ford took a few design cues from the Bronco and several of its pickups and crossovers for the Maverick. That’s appropriate given the way it’s constructed since it is technically a crossover between a pickup and a crossover—again, in a manner of speaking.

You get a familiar steering wheel, along with either cloth seats or two-tone leather upholstery. The gauge cluster has analog and digital displays on, and you also get an 8-inch touchscreen with Apple CarPlay and Android Auto—like pretty much all Fords anyway. It even has an embedded modem to connect up to 10 devices, which is a pretty nifty feature. Ford calls it “FordPass,” and it grants occupants in the cabin internet access inside the car. We’re used to seeing turbo diesel motors in pickups, but Ford figured to hop on the electric train following the Mach-e and the Lightning. You get either a 2.5-liter Atkinson cycle gasoline engine driving the front wheels together with an electric motor. The other option is to go for a turbo. Ford also will field the Maverick with a turbocharged 2.0-liter EcoBoost engine that’s more capable and has all-wheel drive.

As for power figures, the hybrid gets 191 hp and the EcoBoost gets 250 hp. Stellar figures, and powertrains. One difference is that the Maverick has a transverse engine layout, which means that it is front-wheel biased, similar to most crossovers in the market.

Think of it this way, get the comfort and ease of use of a crossover, but with the hauling capability of a pickup truck. It’s the best of both worlds, and it seems like the perfect fit for drivers who frequent the city and don’t attend to heavy-duty hauling duties that much.

With a starting price of $19,995 US dollars, given current PHP and USD exchange rates, the truck starts under a million pesos. Though loaded with options, the Maverick may even match the prices of some Ranger variants.

That being said, the added refinement should not be taken for granted, and a unibody is a pretty big deal in the realm of driving comfort. It could make sense, but for the right price.