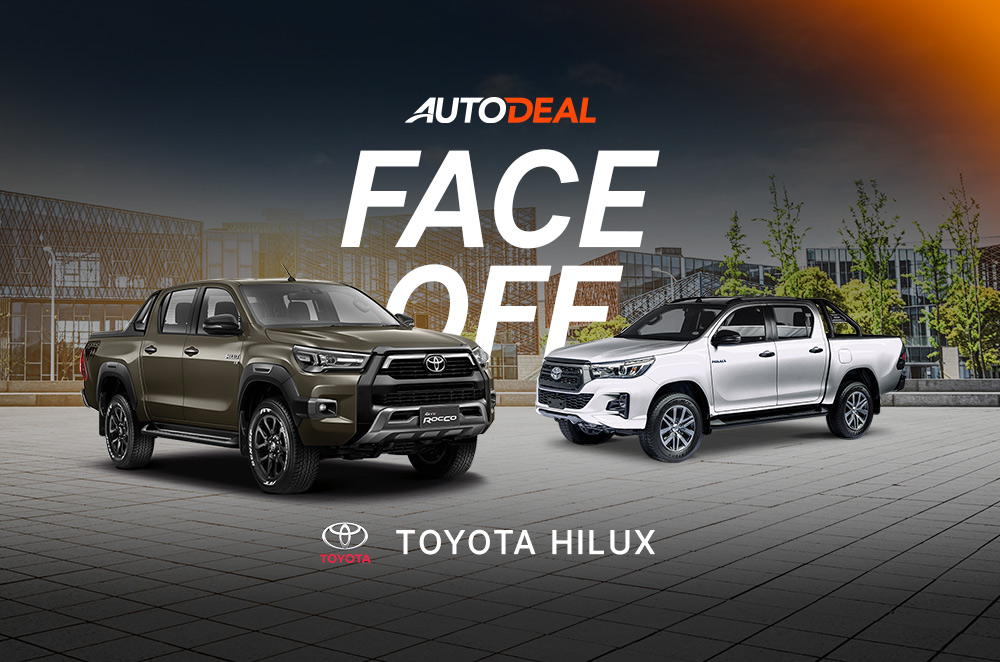 The Toyota Hilux has been one of the Japanese brand’s best selling models. It has seen many generations and has seen multiple uses locally and abroad. The current generation of the Hilux which is being sold in the Philippines has been around in the country since 2015. This makes the popular pickup a prime candidate for a refresh. Toyota Thailand has beaten the Philippines to the punch by launching the updated model of the Hilux. It is important to note that the popular Toyota pickup goes by many names such as the Revo Rocco and the Invincible.

Let’s take a closer look at what exactly Toyota did to update the Hilux in Thailand and how it stacks up against its older version still available in the Philippines. There were a lot of updates done to the pickup so let’s get started. For this comparison, we will be using the Hilux Revo Rocco/ Hilux Invincible and we will be comparing it to the nearest local variant which is the Hilux Conquest. 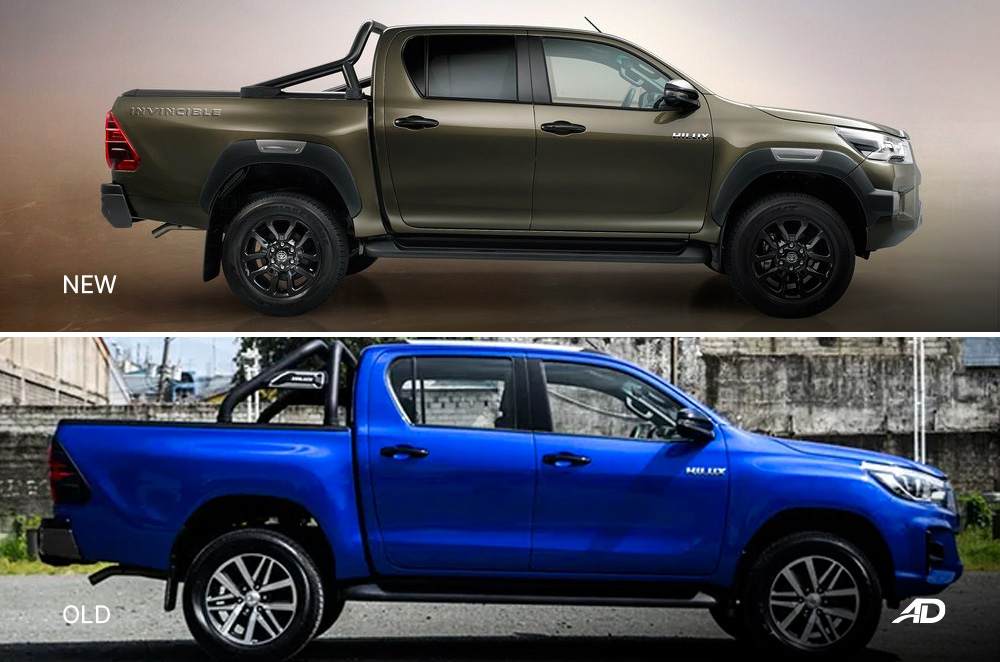 As is done with many refreshes, the Toyota Hilux gets a new front and rear look. The overall shape of the Japanese pickup is the same, however, it appears the vehicle has gotten a bit wider giving it a more macho stance befitting of its new face. The pickup also gets a new set of wheels to match the new look. At a glance at what you will first notice is the grille. The grille is now smaller than that found on the older model. The redesigned front of the vehicle now allows for better accents allowing for a more imposing look compared to the more subtle older version of the vehicle. The projector headlights have become smaller, however, they now feature LED daytime running lights found in the middle of the housing instead of the top. The fog light housings like the headlights now come in a new form factor. These now come in a square-shaped cover instead of a triangular one. Overall the refreshed version of the vehicle goes for a wider look thanks fender flares and slightly wider wheel arches. 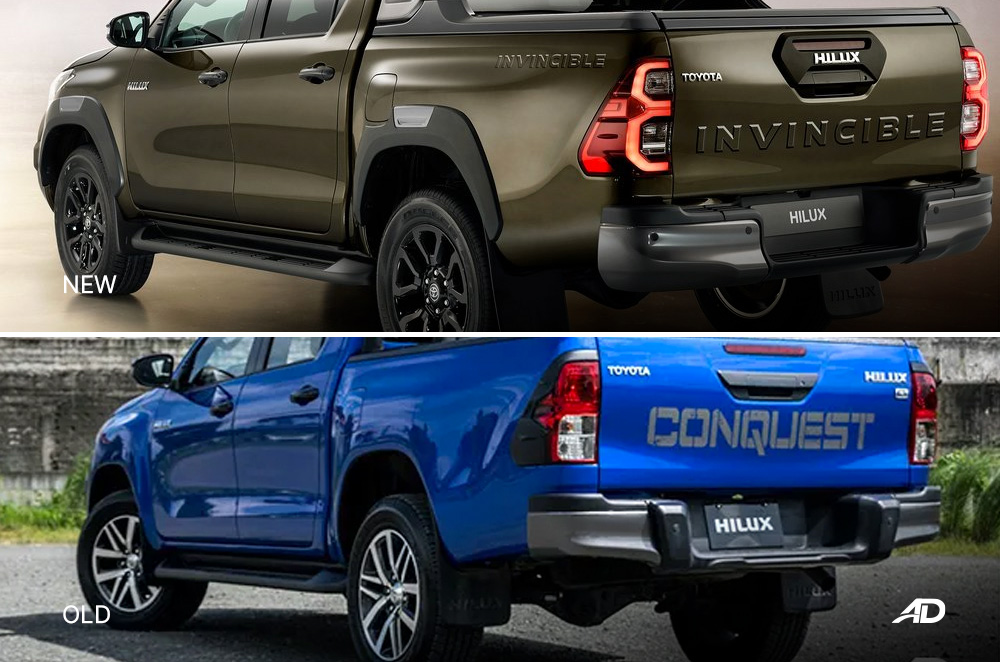 The rear of the Hilux remains familiar. While it still retains the same overall design and curves, the newer version does come with revised taillights. Similar to that of the headlights these rear lights also get the LED treatment. They now come with a B-shaped design that now encompasses the signal and reverse lights. The bed of the new Hilux is also the same carrying over where the previous generation left off. A plastic bed liner can still be had with the vehicle that allows you to throw in whatever cargo you need without worrying about scratching the paint. The interior of the new and old Hilux remains familiar. The dashboard and button layouts are still in the same place and nothing much as changed. One notable difference, however, is at the center of the dashboard as the popular Japanese pickup now comes with a much bigger 8-inch infotainment system that comes with Apple CarPlay and Android Auto Capabilities. Those who have been clamoring about a reverse camera will be happy to know that the refreshed Hilux does come with one as standard at least for Revo Rocco/ Invincible variants. Another key difference is with the rearview mirror. A black and white camera has now been added allowing the vehicle to utilize the Japanese Brand’s Toyota Safety Sense. That’s right the refreshed Hilux now comes with the newer safety technology found in its siblings the Corolla Altis Hybrid, the Fortuner, and the Alphard as well.

Toyota has added something that a good number of the buying public has been clamoring the Japanese brand for and that’s a suspension upgrade. The pickup truck now features Toyota’s “Superflex Suspension” which gives the vehicle a better set of high-tensile steel leaf springs at the back along with new bushings at the front. Toyota says that with these new upgrades the Hilux will now have a better and more SUV-like ride. The steering system has also been upgraded as it now comes with a Variable Flow Control System. This lets the steering be adjusted on the fly depending on how fast the vehicle is going. The steering angle can also be seen in the vehicle’s multi-information display.

Under the hood of the refreshed Hilux is the same engine found in the current model. However, Toyota has done some tweaking to the pickup giving it a bit more power. The 2.8-liter engine now pushes out 201hp and 500 Nm of torque. A rather impressive improvement from the 174hp and 450 Nm of torque older output. This represents a 27hp and 50 Nm of torque gain over the older engine. Power is still sent to either all four wheels or just the rear wheels through either a 6-speed manual or a 6-speed automatic transmission

Here is where things can get a bit tricky as the Philippines as no official prices for the refreshed Toyota yet. However, what we can give you is a ballpark figure based on the closest models that resemble those found locally. It is important to note that prices for Thailand are much higher than that of the Philippines due to taxes, so let’s get started.

The Thailand spec Hilux that most closely resembles the J to G trims in the Philippines is the Revo Prerunner and Revo. These models cost between 707,000 to 1,239,000 THB across the three different model ranges. When adjusted to Philippine currency these estimate to roughly be between within the same price range as the Hilux being currently sold in the country.