Have you ever dreamt of being able to drift just like in the movie The Fast & The Furious: Tokyo Drift or in the anime series Initial D? Hyundai Philippines and Lateral Drift productions gave us and a few motoring journalists the chance to experience just that.

For those who don't know what drifting is, it’s a driving style in which the driver uses the throttle, brakes, clutch, gear shifting, and steering input to keep the car in a state of oversteer while maneuvering from turn to turn. It’s often described as “controlled chaos”. The first order of the day was for to learn how to do the drifting prerequisite, donuts. During the exercise, we noticed how eager the engine was to let us feel all of its 258 hp and 353 Nm of torque with every step of the pedal. The clutch was a little bit heavy though but smooth. Meanwhile, the shift stick was precise and easy to throw-in gear. On the other hand, the steering wheel was light yet we can feel the road and point the car in the direction we wanted to go. For the next exercise, 2 cones were set-up on the pavement. Participants were to attempt to do donuts on the first cone then transition to the next cone to do more donuts. After a quick demonstration and a few pointers, we went ahead and did practice runs. This was where the first tire casualty of the day happened which halted the program briefly.

After letting the car cool down and replacing the worn out tire, it was competition time. From a standing start, driver's would make their way to the cone at the far end of the course and initiate a left hand drift. After that, transition into the 2nd cone and do a 360-turn back to the start. It did sound easy until we sat in the cockpit.

After a few practice runs which most of us miserably failed, it was time to get serious. A lot of us had trouble initiating the drift while moving. It was at times confusing to balance the steering wheel, throttle, and clutch though with all that excitement running through our veins. Despite our best efforts only 2 out of the 9 participants were able to complete the course. Unfortunately for us, we weren't one of those. But not all was lost for us as the experience had us smiling from ear-to-ear as we disembarked from the Genesis Coupe. 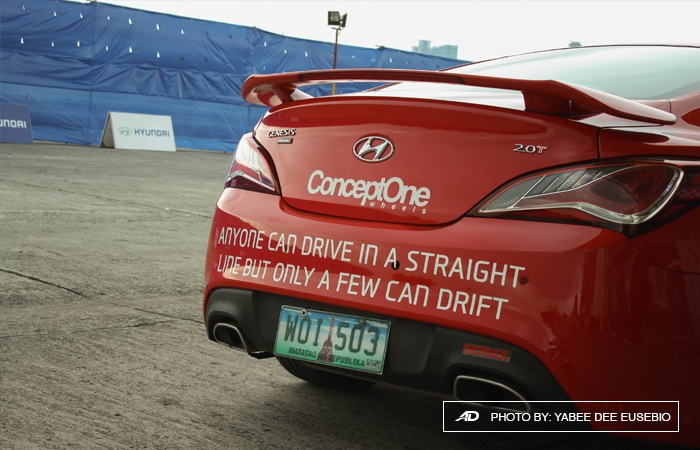 After the abuse it took all day, none of the cars broke down. We think it's safe to say that the Genesis Coupe is a testament of the high build quality that Hyundai has to offer to its customers. Not bad for a 2-door sports car that's more affordable, bigger, and more powerful than the Mazda MX-5 and Subaru BRZ.