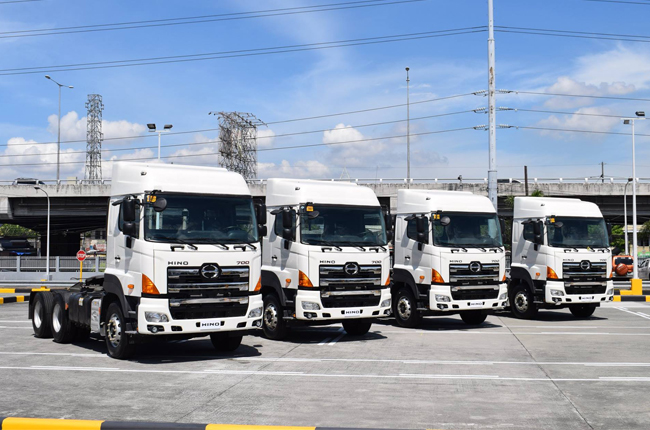 Hino Motors Philippines (HMP), the exclusive distributor of Hino trucks and buses in the country, recently launched its Euro IV compliant 700 series heavy-duty trucks. The new lineup, according to the brand, is designed for the different applications and logistics needs of businesses.

The Total Support that Hino continually aims is to maximize operation and minimize lifetime cost of our lifetime business partners. We strongly believe that providing best-fit products and total support are indispensable as we support customers’ business and contribute to society and grow with them at the same time.
Yasuhiko Ichihashi
Hino Motors, Ltd. Chairman

Both the SS2P and the SH2P are six-wheeler high roof trucks. The former has a 16-speed transmission, has a gross weight of 60 tons, and a pulling capacity of 40 to 45 tons. The latter, on the other hand, is equipped with a 12-speed transmission, weighs in at 45.5 tons, and can pull 30 to 35 tons only.

Meanwhile, the ten-wheeler FS2P truck has a 12-speed transmission and a flat STD roof. It comes in two variants; the FS2PMUM 9-cubic-meter mixer body and the FS2PMUD 15-cubic-meter dump truck body.

Last but certainly not the least, the 12-wheeler FY2P will be available in three variants – the FY2PUUM, FY2PWUD and FY2PYUA. The FY2PUUM features 10-cubic-meter mixer body and CBU chassis, FY2PWUD has a 20-cubic-meter dump truck body, and the FY2PYUA gets a 32-foot OAL body for cargo requirements.

While all three will come standard with a 12-speed transmission and weigh in at 39.4 tons, the FY2PUUM and FY2PWUD will have STD roofs as the FY2PYUA will get a high roof.