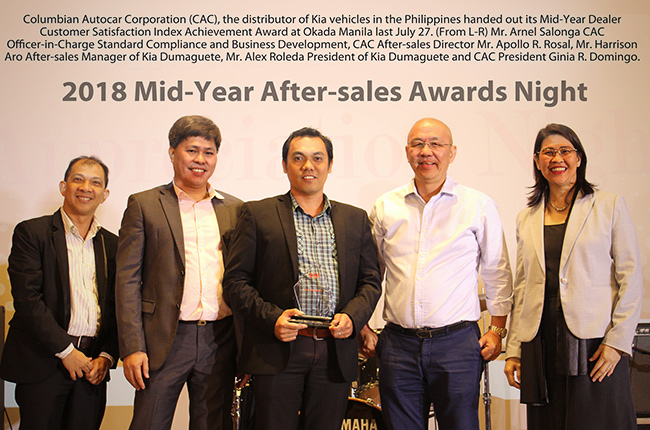 Hard work does pay off – this is what Kia’s exclusive distributor in the Philippines Columbian Autocar Corporation (CAC) wants its dealers to observe. Last month, CAC held its 2018 Mid-Year After-sales Awards at Okada Manila to award its best-performing dealers.

In efforts to bring the brand closer to its customers, CAC has awarded select dealerships in recognition to their unmatchable service and persistent hard work. Awards such as the Dealer Customer Satisfaction Index (DCSI), After-sales Compliance Achiever award, among others were given to the top-performing Kia dealerships across the country.

“This is a rare opportunity to bring together select dealers from our network to honor their achievements and to celebrate the hard work they put in day-in, day-out of bringing the Kia brand closer to the public. The dealers, from the principals to the service teams in the showroom and the service crews in the garage, all work very hard and we at corporate are always enthusiastic whenever we are able to reward the efforts by our teams that are on the ground.”
Apollo R. Rosal
Columbian Autocar Corporation After-sales Director

With its consistency in meeting its targets, Kia Dumaguete was hailed as the DCSI Achiever for the first half (H1) of 2018. Kia New Manila, which hit the highest average percentage in overall Kia Standard Compliance for process, equipment, and facilities, received the After-sales Compliance Achiever award.