Commuting in the Philippines will get slightly more comfortable as the DOTr has completed its rehabilitation projected for the MRT-3. After completion, the agency has officially inaugurated the project yesterday. The rehabilitation project brought with it several improvements to the rail system in the metro. Giving the trams a clean and a few replacement parts were only just the tip of the iceberg. In addition to giving the passenger areas a refresh, the project also included several upgrades that boost the rail line’s productivity. According to the DOTr, there are now a total of 23 trains running the MRT-3 line, which has doubled the daily passenger limit from 300,000 to 600,000.

As for the trains’ speed, the previous top speed of 30 km/h has now been doubled, as the transit lines can now achieve a new top speed of 60 km/h, cutting the headway between trains from 9 minutes to just 3.5 minutes.

On top of that, the command center for the MRT-3 has also been renovated and features an upgraded CCTV system that has new high-resolution cameras and displays. In addition, the DOTr stated that the trains have new air conditioning systems installed and at the station, escalators and elevators are fully-operational.

“This is how we reshape the MRT-3—reinstating its high-grade design condition with an aim to give the Filipinos a more reliable, safe, and comfortable commuting experience.”
DOTr 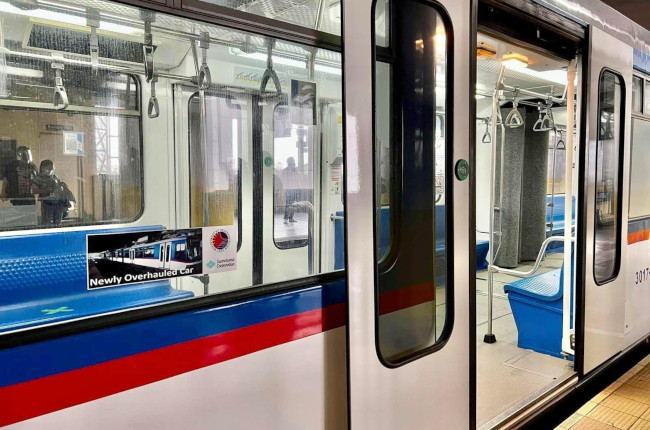 Prior to this, the MRT-3 line has been dubbed “MRTirik” due to the numerous instances where the trains were shut down due to malfunctions. With the rehabilitation project complete, we can expect the railway’s performance to improve as is the case with its reliability. Commuters can enjoy a faster, safer, and more reliable ride on their daily commute following the project’s inauguration with faster travel speeds, more accommodating cabins, and fewer interruptions.

To sweeten the inauguration, the DOTr is offering free rides for MRT-3 commuters a full month after the inaguration. The free rides start on March 28, 2022 all the way until April 30, 2022.