Nissan unveils the latest incarnation of its near-legendary line of Z cars with the Z Proto. The concept car reveals to the public what the Japanese brand has in store for its next generation of a rear-wheel-drive sports car. It is important to note that the current Nissan 370Z has been around since 2009 and has only recently entered the Philippine market.

Exterior: A call back to the past with a modern twist 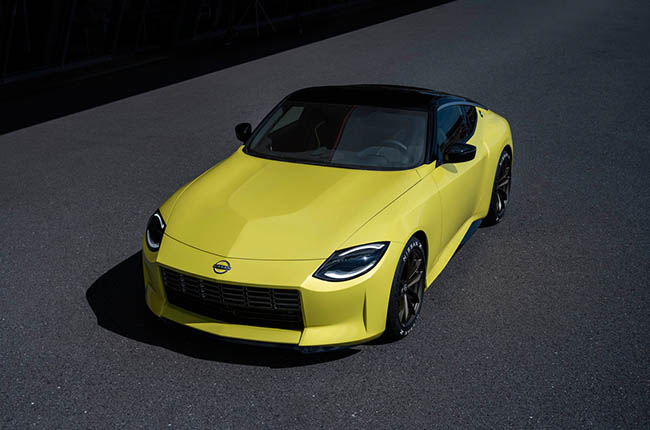 On the outside, the Z prototype comes with retro styling but with a modern twist. It carries the same shape as its predecessor the 240Z and carries with it an elongated hood along with rounded LED headlights, as well as a squared grille. A nod to the Z cars of old carrying on the heritage that they are known for. Even the Fairlady Z badging has been carried over to the concept car. Moving on to the rear and the Z Proto comes with black partitions that run the length of the trunk lid that goes over the rear fenders. This helps hide its Nissan 300ZX inspired LED taillights underneath. While these styling elements are all retro throwbacks the concept car also adds its own modern styling elements with the addition of carbon fiber pieces to help spice up the exterior. These come in the form of side skirts, front lower lip, and rear diffuser. The modern touches don't stop there as the retro-styled concept car comes equipped with a lightweight set of 19-inch wheels along with a pair of exhaust tips at the back.

Interior: Everything where you need it to be On the inside, the Nissan Z Proto comes with a simple yet very functional interior. While it does outright shout out luxurious it does come with a more functional set up in mind. It is important to note that since this is still a concept car Nissan may change certain elements later on. The Z Proto comes with a deep-dish three-spoke steering wheel, bucket seats, a large touchscreen at the center, and what appears to be a digital gauge cluster display. Seat materials may consist of Alcantara and leather, with accent stitching that is the same as the vehicle’s color. Just like the original 240Z, the Z Proto remains a two-seater vehicle. Under the hood of the Nissan Z Proto is a twin-turbocharged V6 gasoline engine. Since the vehicle itself is still a concept its exact power figures remain a mystery. However, speculations have suggested that the powerplant is more than capable of producing upwards of 400 horsepower.

With that said it would be a big improvement over what the current 370Z produces which is 332hp. This would put the production vehicle well within the power range of its other Japanese as well as its European and American counterparts. As it stands the twin-turbo V6 motor will be mated to a 6-speed manual transmission. Nissan also states that an automatic transmission is in the works for the production version of the vehicle.

While the Z Proto is still just a concept car it is a pretty good indicator of what is to come from Nissan. For now, all we can do is wait until its official 2022 launch to see what the automaker might add or remove for the final product.